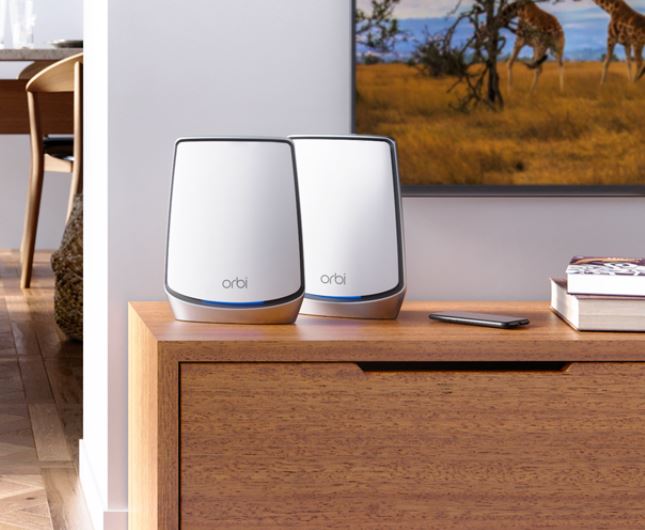 “Have the demands on home networks exploded due to COVID? Yes! Is this (working from home) the new normal? Yes! Is your Wi-Fi out of date? Absolutely!”

Now David’s job is to spruik about NETGEAR and Wi-Fi 6 but so many of the issues he raised hit a chord with me.

Wi-Fi 6 AX focuses on network capacity. There is no way even a two-year-old router (<AC2600 like those supplied by most NBN providers) can support more than a few devices especially if they all want a piece of the network at the same time.

And there is no way that a single router can cover more than an area of 300m2 – in fact, it is going to be a whole lot less if the signal has to go through drywall (especially those with steel studs), cupboards, cement floors or windows. Not to mention that most routers are in the wrong place to start with – a garage, cupboard, under the stairs. A router needs to be in the centre of the action.

In fact, one of the most asked questions GadgetGuy gets is where to place a router, what router to buy and will a MESH work for me. We have a MESH tutorial here and its an excellent, if a little techy read. We also covered NETGEAR’s Nighthawk EAX80 Wi-Fi 6 AX Wi-Fi mesh extender here. And although this article is about a different brand router, it chronicles a MESH set up in a modern home using Ethernet-Over-Power Powerline extenders to create a bulletproof MESH network.

So, to Orbi and Nighthawk Wi-Fi 6 Mesh routers

Orbi is NETGEAR’s ‘MESH’ brand, and after a few earlier ‘dual-band’ models that did not impress us, it has focused on Tri-Band models with the option of using Ethernet backhaul. These do impress.

Tri-band means that it uses a dedicated 5Ghz band to securely communicate with the other Orbi while retransmitting a 2.4 and 5Ghz Wi-Fi signal to devices. The biggest issue is that like all mesh these need careful placement – mesh cannot amplify or extend a poor signal to start with! That is why you will frequently see me mention Ethernet backhaul.

These are the same – the RBK-852 comes with one main router and one satellite, and the RBK-853 comes with two. The US website says that is good for a theoretical coverage 5000/7000sq ft (450/650m2), but a lot depends on router and satellite placement and home construction.

Again, the same device – 2 or three units covering a maximum of 5000sqft. The key difference between the RBK852 and the RBK752 is that the first has eight Wi-Fi 6 streams and the latter has six.

They are interoperable – you can mix and match although if you do then its best to have the RBK852 as the main router. They also support dedicated Ethernet backhaul that may be needed if you can’t get a good signal strength to retransmit.

Perhaps the most interesting thing about this is its support of Wi-Fi Alliance EasyMesh standards. Simply put it allows certified devices to mesh to other EasyMesh devices of any brand and use a single SSID.

It can either MESH to an existing compatible Nighthawk AX series router or the main unit can be an AX1800 router.

It uses dual-band (no dedicated tri-band 5Ghz) AX1800 (2.4GHZ 600Mbps and 5Ghz 1200Mbps with 2×2 streams each). At present they do not support dedicated Ethernet backhaul but do have a Gigabit Ethernet port for this soon.

We will be reviewing the Orbi and Nighthawk Wi-Fi 6 Mesh routers shortly. If they deliver as promised, then that will be the end of Australian home Wi-Fi blackspots. But remember that Orbi and Nighthawk Mesh have the same endgame but are very different in how they get there.