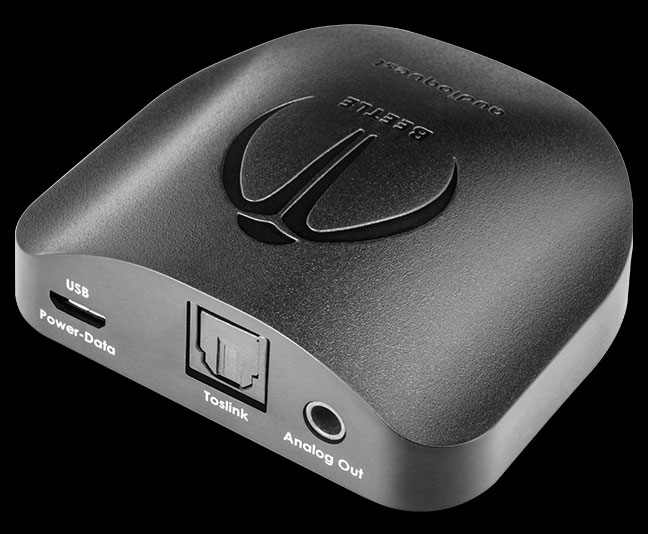 No, I am not talking about a V-Dub or an annoying flying insect, but Audioquest’s Beetle – an Optical-Bluetooth-USB, Digital-to-Analog Converter (DAC).

To put this in perspective, you have a digital audio source – say an iOS or Android smartphone/tablet/TV/Amplifier with Bluetooth, TV with Toslink Optical and a PC or Mac computer with  USB or Bluetooth. Yes, some of these also have a 3.5mm audio output as well – except Apple.

And the Beetle takes these and outputs very clean analogue audio from the 3.5m stereo headphone jack.

The 3.5mm stereo audio jack needs to be connected to an analogue speaker, or headphones, or it could go into the AUX IN of an amplifier or amplified speaker – it will adjust output accordingly. Got it – digital sound can be converted to analogue sound!

The purest sound input is Optical Toslink as it has no transmission issues and no induced ‘electronics’ noise. Most devices with Toslink can also be configured to output sound to Toslink and HDMI or the speakers simultaneously allowing a headphone to be used with the Beetle while the sound is also coming from the TV speakers – great for the hard of hearing.

Beetle has the following inputs (from a music device):

Its input sampling rates are:

A DAC is about getting the best possible sound out of a sound source device to the listener. A dedicated DAC like Beetle is far better than internal DACs on most devices.

It retails for A$349 and is sold via Amber Technology

First impressions are a scarab-like, black bug like thing with three inputs – that is it.

What use is it?

I am going to borrow from Master Switch’s review paraphrased of course.

I tested with all possible inputs and found that in all cases the sound was at least equal to or better than the source. I found Bluetooth sources via the Beetle to be markedly smoother and superior.