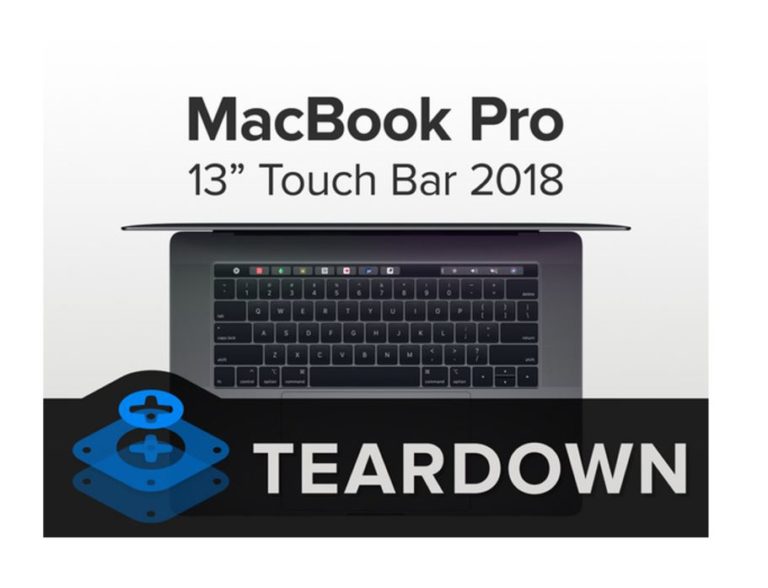 The new 2018 MacBook Pro 13” Touch Bar has just been released by Apple. While similar on the outside to the model it replaces, the MacBook Pro 13″ gains a massive 50% bump in performance, according to Apple. Our friends at specialist ‘teardown’ website iFixit have already taken one apart to see what’s inside and rated it for repairability.

Before we get into iFixit’s teardown, lets recap on the MacBook and Pro keyboard issue. It appears that these otherwise fine laptops since 2015 could potentially suffer from a keyboard defect. See GadgetGuy’s earlier report for more details here.

The issue also led to a class action that resulted in an offer to extend the keyboard warranty to four years from the date of retail purchase.

If you have one of these MacBook or Pros with the potentially faulty keyboards (let’s call them Butterfly 1.0 and Butterfly 2.0), it’s possible that dust or debris can get permanently lodged beneath a key and stop it from functioning. Apple will replace the keyboard, however, the concern is that the new keyboard may also be susceptible to the same fault.

As a result, the latest class action calls on Apple to replace all MacBook and Pro keyboards from 2015 with the new Butterfly 3.0 keyboard. This version was first found during the iFixit teardown of the 2018 MacBook Pro 13” Touch Bar. iFixit has discovered that a patent application was lodged in September 2016 to cure this very issue in future MacBooks. The solution was to protect the key mechanism with a silicon dust shield, so hopefully, the problem has now been nipped in the bud.

[blockquote type=”default” style=”1″]Keyboards include mechanisms that prevent and/or alleviate contaminant ingress. In some embodiments, a keyboard assembly includes a substrate … operable to direct contaminants away from the keyboard mechanism.[/blockquote]

iFixit is an invaluable service to third-party repairers and potential buyers. Its teardowns can reveal how the latest laptops and phones are put together, and how easy it is to replace individual parts. You can read iFixit’s full report here.

iFixit reports that apart from a processor, battery and keyboard upgrade, this year’s version is fairly similar to last year’s 13” Touch Bar model. It has a new USB-C charger that has gone from an aluminium USB-C socket to a plastic one.

iFixit also found that the trackpad is the only replaceable part without removing the battery. All up, the new MacBook 13″ scored a 1-out-of-10 for repairability. This supports the general trend that most brands of notebooks are becoming less and less repairable as they get slimmer, lighter and more powerful.