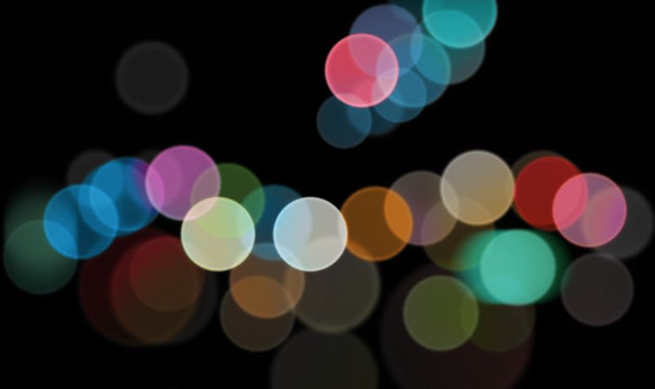 Apple has confirmed the date of its next launch event, where many are expecting to see the new iPhone 7 unveiled.

Confirming September 7th, or early in the wee hours of the 8th in Australia, the event will take place at the Bill Graham Arena in San Francisco. This is the largest venue that Apple uses for its launches, which may be an indication of the breath of products announced.

Also, reading into the cryptic hints that Apple often seeds into the invite’s design, the out of focus water droplets and dark background of the coloured splotches could suggest a focus on the iPhone 7’s new camera.

The seemingly wet ‘droplets’ of colour could indicate official waterproofness for the new phones, or the out of focus look could imply new creative effects from the camera, such as improved ‘bokeh’, or an out of focus look made possible only with higher end non-camera phone cameras.

Also, the dark background could suggest a long needed improvement in the iPhone’s low light performance, which is currently thoroughly beaten by the camera in Samsung’s Galaxy S7 and Galaxy Note7.

Also, we’ll be watching to see if the new iPhone drops the headphone jack, relying on wireless headphones and ear buds, or otherwise, sharing the connection with the Lightning port.

This is likely due to fact that moving to the better looking and more energy efficient OLED display, which is what many of  the iPhone’s competitors are now using, would require a major redesign, not to mention enough OLED screens to be available. Maybe next year.

Otherwise, there are hints at an uprated Apple Watch, which, while still sharing the same shape and size, could have a larger battery. While many of us want to see the Apple Watch work independently from the iPhone, and have its own SIM, we doubt this will happen due to the power requirements and its impact on battery life.

Also, there may be a new MacBook Pro laptop announced, which will be slimmer, more powerful, and possibly feature a narrow OLED screen running across the top of the keyboard that can display notifications and other information.

We’ll be covering all the action on launch day, so be sure to check in on the 8th.