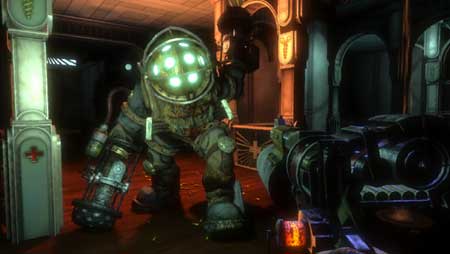 2K Games, a publishing label of Take-Two Interactive Software, Inc has announced that BioShock, its top-rated title exclusively available for the Xbox 360 videogame and entertainment system from Microsoft and Games for Windows, has released new downloadable content for players on both platforms. The content includes new Plasmids and Tonics, achievements and interface upgrades, and is now available as free downloadable content from Xbox LIVE Marketplace, through an Xbox 360 Title Update, and as part of a PC patch.

“As one of the highest rated games of the year, we wanted to continue to connect with the fans that made BioShock such an overwhelming retail and critically-acclaimed hit,” said Christoph Hartmann, President of 2K. “We are excited to offer new downloadable content that will extend and enhance the replay value of this title.”

In response to gamersÃ¢â‚¬â„¢ requests and feedback from the Cult of Rapture (http://www.CultofRapture.com) community forums, fans of BioShock now have a widescreen option, granting a wider horizontal field of vision, as well as additional enhancements to the game. The Xbox 360 Title Update will be automatically applied at the gameÃ¢â‚¬â„¢s startup when users log into Xbox LIVE. PC owners can access both the additional content and gameplay improvements via a downloadable patch, available at http://www.2Kgames.com/BioShock/support.

Developed by 2K Boston and 2K Australia and rated MA 15+; BioShock is a “genetically enhanced” first-person shooter that lets players do things never before possible in the genre. Gamers enter the game as a castaway in Rapture, a decaying art deco underwater utopia torn apart by civil war. Caught between powerful forces and hunted down by genetically modified “splicers” and deadly security systems, players have to come to grips with a deadly, mysterious world filled with powerful technology, fascinating characters and morality defining choices. To make it to the end, players can turn everything they encounter into a weapon, biologically modify their body with Plasmids, hack devices and security systems, upgrade weapons, craft new ammo variants, and experiment with different battle techniques. No encounter ever plays out the same and no two gamers will play BioShock the same way.