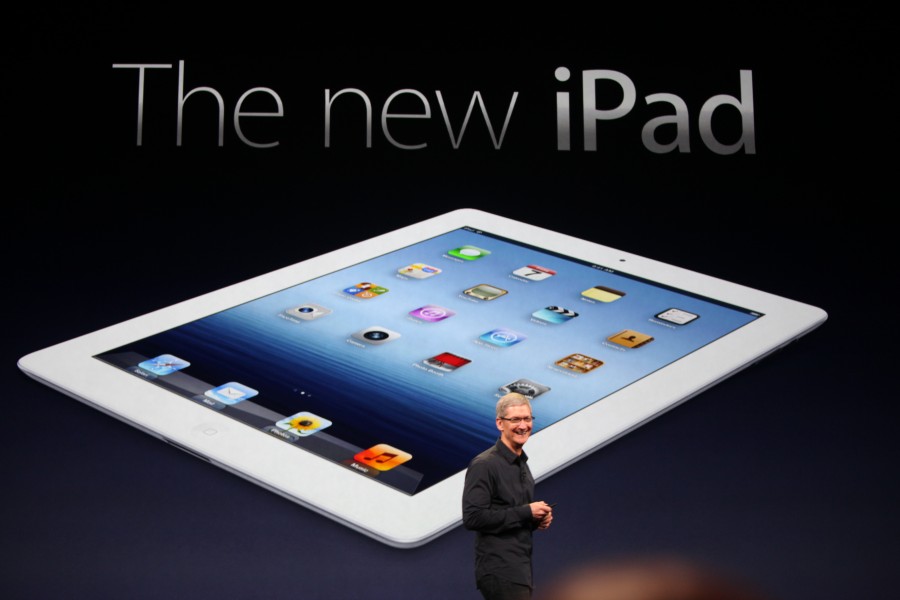 Apple’s CEO Tim Cook officially announced the successor to the iPad 2 in front of a crowd of select media at San Francisco’s Yerba Buena Centre for the Arts today. “In many ways the iPad is revolutionising portable computing.  Apple has its feet firmly planted in the post PC future,” said Cook.

Reporting from the event, we’ve compiled an up-to-the-minute summary of the latest iPad’s features, along with how the official specification compared to the pre-launch predictions. Also, we’ll be getting our hands on one of the first iPads, and filing our exclusive hands-on report, which will be posted shortly.

Surprisingly, Apple has broken with convention and named its new version ‘The new iPad’ rather than the iPad 3, iPad HD or iPad S. This new moniker leaves the iPad 2 room to sell alongside of the ‘HD’ for those who are not interested in a higher priced model with an HD screen.

One of the iPad’s most hotly anticipated features is a major update to its screen. Met by enthusiastic applause, Apple’s Tim Cook confirmed that the iPad 3 will ship with a Apple ‘Retina’ display. While retaining the same 9.7 inch screen size as previous iPads, the new Retina display contains a technically impressive 2048 x 1536 resolution – exactly double that of the iPad2. This world-first squeezes an incredible 3.1 million pixels into a compact frame  and provides more detail than ‘full HD’ televisions, on a screen a fraction of the size. As first seen on the iPhone 4, the iPad’s 3’s Retina display has a lower 264 pixels per inch (PPI) count than the 324 of the iPhone but they’ve ensured that it is still too difficult to discern individual pixels. This means that text will look incredibly crisp and sharp, even at very small font sizes, and movies, games and photos can contain up to twice the detail as the iPad 2 and iPad 1.

Instead of holding back until more of the world has LTE in place, Apple has equipped the iPad 3 with LTE support, which will drop back to 3G compatibility when required. The new iPad also supports DC-HSDPA, for further network compatibility. Also, as per previous iPads, you will be able to choose from both Wi-Fi-only and LTE + Wi-Fi models. Apple has 2 flavours of LTE – one for Verizon and one for AT&T networks. While Apple Australia has confirmed that the new iPad will be able to support ‘faster-than-3G’ cellular connections, it’s still uncertain if this will be provided via DC-HSDPA or LTE network compatibility.