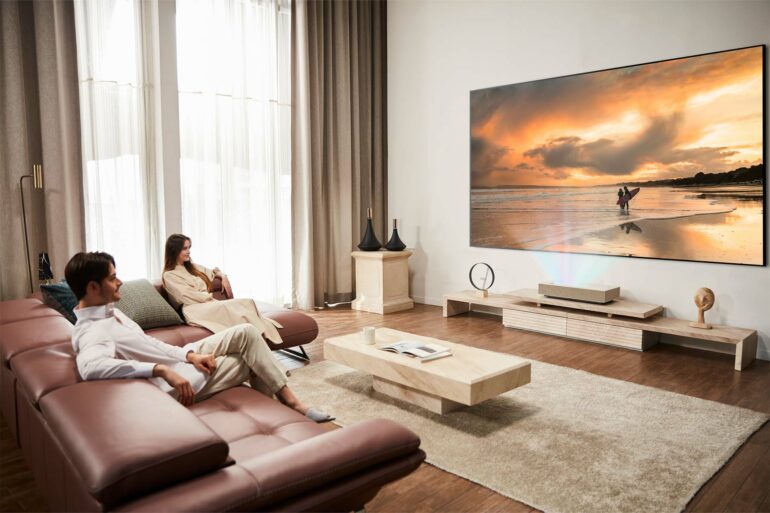 LG is adding to its premium CineBeam projector range with the new Ultra Short Throw HU915QE 4K laser projector capable of beaming up a 90-inch image from less than six centimetres away from a wall.

A follow-up to the HU715Q projector from earlier in the year, the upcoming HU915QE model can also create a 120-inch image from 18.3 centimetres away from a viewing surface. Made for movie lovers, it uses three-channel laser technology, using a separate light source for each primary colour, which LG claims results in more vivid images – even during the day – than projectors using a single light source.

From a technical standpoint, the CineBeam HU915QE projects brightly with 3,700 lumens at a 2,000,000:1 contrast ratio, and the lamp has a 20,000-hour life expectancy. It has an in-built 2.2 Channel 40W speaker system plus the capacity to wirelessly connect to two Bluetooth LG speakers at the same time. To directly plug viewing content in, you can access three eARC HDMI ports and two USB 2.0 ports.

Made for more than just plugging things into, the projector uses the LG webOS platform, so you can stream content from the major services directly to the device. It also supports Screen Mirroring, Apple AirPlay 2, and Bluetooth streaming.

LG hasn’t announced a specific release date beyond indicating “the first half of 2022, starting with key markets in North America, Europe and the Middle East, with Latin America and Asia markets to follow.” There are no confirmed pricing details either, although a quick online search suggests around the US$5,999 mark.

If you’re committed to watching movies and TV series on the biggest display possible, but space is at a premium, an Ultra Short Throw projector might be what you’re looking for. Considering what you’d pay for similarly-sized TVs, it’s not a bad value proposition either.