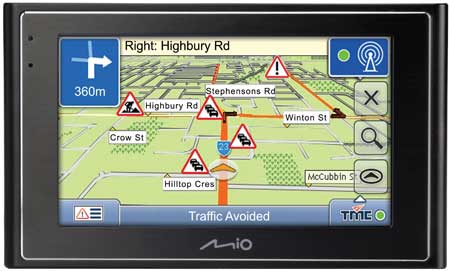 Mio has unveiled its latest portable navigation device offering for the Australian market, three new feature-packed models set to offer more value to consumers than ever before.

The Mio ‘Moov’ series includes the Moov 300, Moov 360 and Moov 370. All models boast innovative features, with several being first to market, in a sleek design (both unit and cradle). Even more feature highlights are included as standard across the range, including the new 4.3″ anti-glare widescreen to make viewing and accessing information simple and easy and a competitive two year warranty, for peace of mind and guarantee of quality.

The Moov range promises the most comprehensive map data available in Australia with its MioMap2008 feature, powered by NAVTEQ, giving users access to the most up to date map data, with 100 per cent coverage of Australian roads.

The Mio Moov series is also the first device in the Australian market to feature Live Points of Interest (POI) search powered by TrueLocal. In addition to the 600,000 built-in points of interest (like restaurants and bars) included with MioMap2008 software, users can now connect to over a million business listings and venues via live search using a Bluetooth compatible mobile phone. Convenience is guaranteed with the feature working straight out of the box – no additional downloads required.

The new range also offers real time traffic updates via the Traffic Message Channel (TMC), provided by SUNA Traffic. Following on from being first in Australia to offer TMC in Melbourne, the Moov range extends coverage to include metropolitan Sydney and Brisbane. The Moov 370 is TMC enabled in-the-box while the Moov 300 and Moov 360 can be activated as an optional extra. With TMC technology, users can find out what’s causing a delay, approximate time of delay and a detour option to reach their destination on time.

In addition to incorporating more comprehensive map data, Mio has included enhanced safety features across the entire Moov range. Users can concentrate on keeping their eyes on the road, with turn-by-turn guidance in clear Australian pronunciation and spoken street names included as standard. So instead of a computer voice saying ‘Turn right in 50 metres’, the Mio Moov will effortlessly guide you with ‘In 50 metres, turn right into George Street’. Directions simply couldn’t be clearer.

The Mio Moov will also alert drivers to the locations of over 11,000 fixed red light and speed cameras, school zones, blackspots and railway crossings. Visual and audio warnings will alert the user prior to the location, so they can concentrate more on the road.

Users are also set to discover a whole new dimension to discovering new places with NavPix photo navigation. Drivers can choose to navigate to a destination using a photo, simply by downloading geo-tagged images from Flickr and the MioMore desktop (PC-compatible) software.

A quick start up is also guaranteed with Mio Moov Instant Fix, allowing the Mio Moov to hook up with satellites up to five times faster. It also intuitively updates the data every three days without the need for a PC connection.
In addition to the plethora of new features included as standard, the Mio Moov 360 and 370 include even more product features to offer the ultimate in convenience, with Bluetooth Hands- Free capabilities and 3D landmarks.

By simply pairing a Bluetooth compatible phone with the Moov 360 or 370, users can make or receive phone calls – the Moov becoming a hands free device. Feeling disorientated? As the name suggests, the new 3D landmarks feature will highlight prominent landmarks in 3D. View locations like the Sydney Opera House from all angles to get your bearings in an unknown location, with the option to rotate the view 360 degrees to see right around the 3D view. But the difference with Moov is in the quality of the 3D landmarks. Using vector-based images, Mio Moov is able to show intricate detail of the landmark never before seen on an Australian navigation
device.