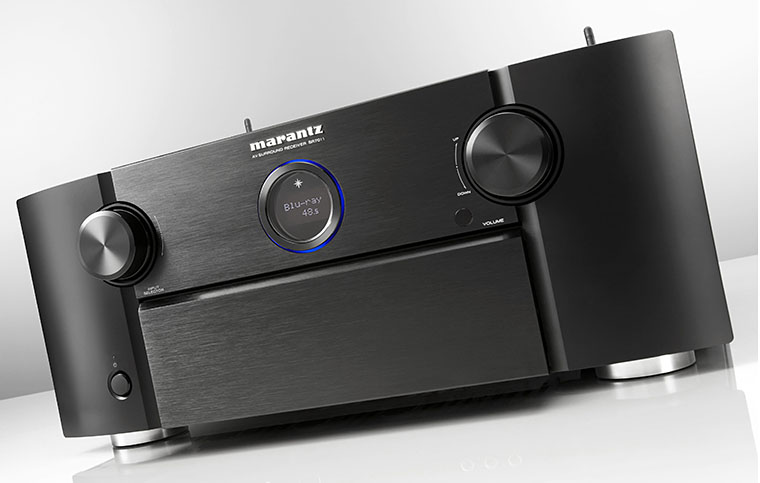 Last week the Australian distributor for lots of home entertainment brands, Qualifi, launched new products from three of them: Denon, Marantz and Heos. Denon and Marantz are long standing hifi and home theatre brands with strong reputations, while Heos is quite new, and has a product lineup all about multiroom audio. So why mention the three in the same sentence?

Well, this year Denon and Marantz are adding models of home theatre receivers compatible with the Heos multiroom system, while Heos is being upgraded to high resolution audio, making it a better quality match with equipment from the likes of Denon and Marantz.

I’ll return to Heos shortly, but first let’s check out the Denon AVR-X6300H, the best it presently has to offer.

Why eleven channels? That means it has all the amplifiers built in which are needed for a full Dolby Atmos or DTS:X home theatre experience. That is, it has amps for seven channels around the room, plus four overhead speakers. All the other receivers I’ve seen so far have either supported only a limited deployment, or required the addition of more amplifiers (like the AVR-X4300H, which needs a stereo power amplifier to be added for the full thing).

These two receivers will be available in December, priced at $2999 and $4699 respectively.

Marantz has likewise refreshed its top of the line models with Heos compatibility. (In case you’re wondering, Marantz, Denon and Heos are all owned by the same parent company.) The models scoring the Heos support are the Marantz SR7011 home theatre receiver and the Marantz AV7703 AV Processor.

The receiver has similar functionality to the Denon receivers, with nine amplifier channels (full Atmos/DTS:X with the addition of two amp channels), but with Marantz’s design, including the distinctly recognisable exterior with its curved edged and round display. The AV Processor is for those who want the same features but intend to use their own amplifiers. It is identical to the receiver, but instead of amplifiers has 11.2 channel outputs in both conventional (“RCA” socket) form, and via balanced XLR outputs suitable for use with high end gear.

Qualifi expects them to be available in December, priced at $4190 for the receiver and $3970 for the processor.

So what about Heos? Originally called Heos by Denon, this multiroom system is based on technology developed in Australia and was first released a couple of years ago. Essentially it allows multiple wireless speakers to populate your house, grouped into various configurations or allowed to run independently, with groups and individual speakers fed from independent sources, all controlled by an app. They will play music from things like Spotify and Pandora, but also from network audio or your phone. You can plug a USB hard drive or analogue audio device into any one of the speakers and send its music to one or more of the others. Likewise for paired Bluetooth devices. It’s highly versatile.

Since it was first launched, additional devices have been added, but the one weakness was that it was limited to standard definition audio – CD quality or a little better. Now it has gone full high res, with support for uncompressed audio in the form of WAV, AIFF, ALAC (Apple Lossless) and FLAC at up to 192kHz sampling and 24 bits of resolution. Heos is expecting to upgrade the system to also support Direct Stream Digital in both standard and double resolution forms.

Clever trick: the new models retain backwards compatibility with the old ones. If high resolution music is being fed to a new model, it can convert it to standard res for the older model on the same network.

Dubbed the HS2 range, the prices are unchanged from the existing models – $379 to $999 for each speaker depending on the model, and $599 for a preamplifier that can be connected to any stereo system. Qualifi expects them to be available by Christmas.