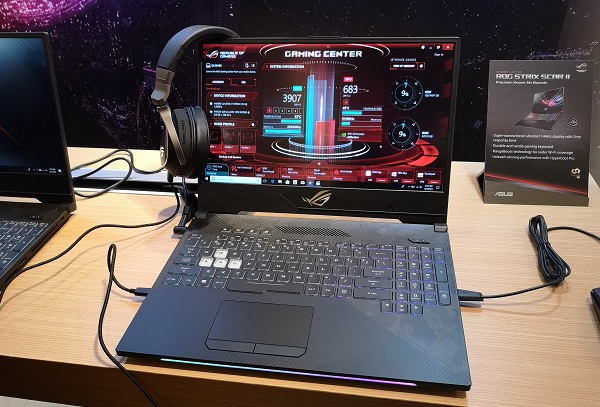 ASUS’ gaming computer brand, Republic of Gamers, has announced two new computers that ought to please gamers. The ROG Strix Scar II and the ROG Strix Hero II arrive in July, both packing the performance required for top game play.

Both units are very similar, differing mostly by which set of four keys are transparent. The ROG Strix Scar II has WASD keys specially highlighted and transparent. For the ROG Strix Hero II it’s QWER.

Both use a full HD 15.6 inch IPS panel capable of running at 144 hertz, and with a fast grey-to-grey switching time of just 3ms. They cover one hundred percent of the sRGB colour gamut. Driving those panels is a NVIDIA GeForce GTX 1060 with 6GB GDDR5 VRAM. The ROG Strix Scar II can be optionally bought with the even more powerful NVIDIA GeForce GTX 1070 with 8GB GDDR5 VRAM.

Gaming computers are all about power and performance, not so much portability, so they’re hefty at 2.4 kilograms in weight. They come with 180 watt power bricks for the standard units, a 240 watt brick for the GTX 1070 version.

To keep things cool – heat being the biggest shortener of life for electronic components – ROG has reworked its cooling systems, under the moniker “HyperCool Pro”. A cooling plate spreads the heat evenly. Two 12 volt fans increase airflow. The trapezoid-cut lid allows improved airflow from the rear vents. ROG has halved the thickness of the heatsink cooling fins to 0.1mm. That provides an increased surface area and reduced air resistance. The cooling system ejects dust rather than let it build up. That stuff’s a killer for computer cooling. A hotkey cycles through three cooling modes, so users can trade off gaming and cooling performance according to their current requirements. “Silent” mode cuts back the fan noise to a minimum, while a “balanced” mode gives good performance for moderate noise. A full blown gaming mode is for highest performance.

ROG has bumped up the audio performance as well, increasing the output to 3.5 watts for each of the two speakers.

The keyboard is rated at up to 20 million keystrokes. “Overstroke” technology means actuation earlier in the keystroke for faster gaming responsiveness.

The ROG website is here. We’ve been covering ROG computers for a while now. See here for example.

The writer attended the launch of the ROG computers in Taipei as a guest of ASUS.