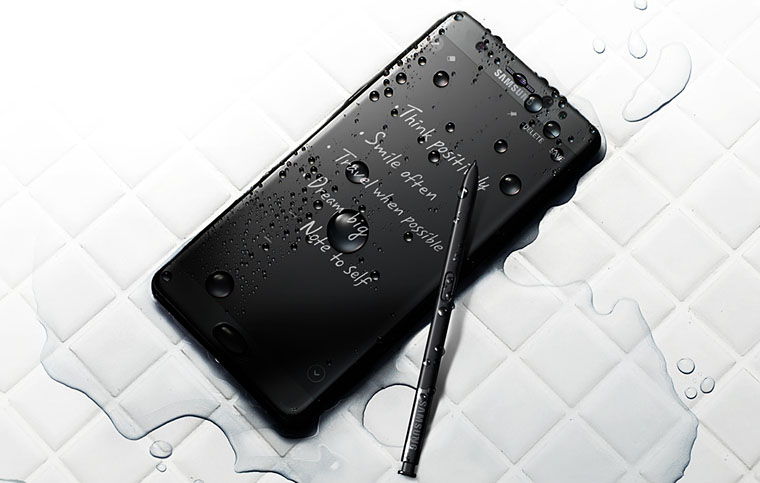 We hope you won’t have to resort to pouring water on your phone, but we must mention that there are reports of batteries in the brand new Samsung Galaxy Note7 catching fire or exploding while being charged. These claim that Samsung is suspending shipments of the Note7 while it investigates, and there is even talk afoot of a global recall.

Such things are possible. I’m a little sceptical. The Note7 uses the newer USB Type-C connector for charging and for attaching accessories rather than the traditional Micro-B USB socket. These have many advantages, not the least being the ability to plug in either way around, avoiding the fiddles often required with Micro-B USB.

They are also specified to carry considerably higher amounts of power and have electronics built in, making cable quality much more important. It is quite possible that third party cables and power supplies of unknown quality were used in the reported cases. However a Samsung official is reported to have told a South Korean news agency that there may be problems with batteries in 0.1% of the phones sold.

We won’t know until Samsung has finished its investigation.

In the meantime, owners of the Note7 should only use the charger and cable provided with the phone to reduce the chances of there being any problem, and to make it clear that if there is a problem, it’s entirely to do with the phone and its accessories, not third party cables and chargers.

Also, just to be on the safe side, back up your phone’s contents, and hold off for a couple of days if you were planning on donating your old phone to Able Australia as we mentioned yesterday. You just might need it.

Telstra, Optus and Vodafone and electronics retailer JB Hi-Fi have now temporarily taken the Galaxy Note7 off the shelf until Samsung completes investigations and decides if a global recall will be necessary.

“Samsung is committed to producing the highest quality products and we take every incident report from our valued customers very seriously. In response to recently reported cases of the new Galaxy Note7, we conducted a thorough investigation and found a battery cell issue.

“To date (as of September 1) there have been 35 cases that have been reported globally. There have [been] no reported incidents in Australia. However, because our customers’ safety is an absolute priority at Samsung, we have stopped sales of the Galaxy Note7.

“For customers who already have Galaxy Note7 devices, we will provide a resolution of their choice including a replacement, repair or refund over the coming weeks.

“We acknowledge the inconvenience this may cause in the market but this is to ensure that Samsung continues to deliver the highest quality products to our customers. We are working closely with our partners to ensure the customer experience is as convenient and efficient as possible. We will have an update for Australian customers early next week.”