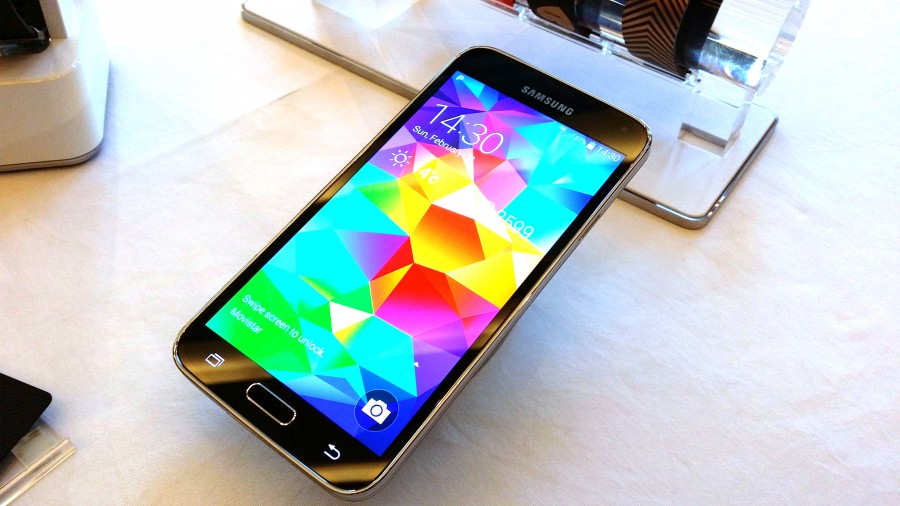 Samsung has taken the wraps off its new Galaxy S5 in front of a full house at the Unpacked5 event in Barcelona. Unlike the previous Galaxy S4, which came with a bewildering array of features at launch, the S5 is focused on enhancing “everyday lives” in a few key areas including protection, photos, transfer speeds, health and design.

When it comes to protection, the S5 has a few fantastic features that seem to be tailor made for Australians.

First, the S5 is dust and water resistant, to the IP67 standard, making it far more tolerant to being slopped in dirt, slapped in sand, slipped the sink or soaked by the rain. Similar to Samsung’s Galaxy Active phone, and as per the IP67 standard, the S5 can be immersed in up to one meter of water, for 30 minutes.

Secondly, as Australians spend more money online via PayPal than any other country, the S5 comes with a fingerprint scanner that links into PayPal, so you can authorise PayPal payments with a swipe of a finger.

The scanner can also be used to unlock the phone, and provide access to ‘locked’ folders and files. When we tested it, the scanner worked nearly every time, though Apple’s version may be a little more accurate for finger edges or when your finger or thumb is ‘off axis’.

On the camera front, there’s a new ‘real-time HDR’ mode, which lets you preview a ‘High Dynamic Range’ photo on-screen, instead of after you take it.

With Real-time HDR, the camera will compensate for scenes where a bright light, such a sun back-lit shot, would normally make the rest of the photo too dark by balancing both light and dark elements to reveal more detail. The net result is better looking photos, and the effect can also be applied to video captures.

Another new feature for the camera is the ‘Selective Focus’ tool. So in cases where you take a photo of an object, but find you’ve focused on the background by accident, you can now switch to the object in the foreground after the photo has been taken.

Selective Focus works by effectively taking two photos at once with different focus points, enabling you to select between them when reviewing your snaps. When tested, this worked fairly well but it does require a well lit shot, a steady hand, and the right composition.

Videos can be now be captured in Ultra-HD resolution, or a massive 3840 x 2160 resolution and 30 frames a second. Considering that there are a growing number of Ultra HD televisions on the market now, and prices are steadily dropping, being able to capture the incredible detail of Ultra HD from your phone is quite a technical feat (although it was present in Samsung’s Galaxy Note 3).

The S5 has been designed to deliver some of the fastest data transfer speeds available from a smartphone.

First, there’s the latest 802.11ac Wi-Fi, along with MIMO support. Then, it comes equipped with Cat 4 ‘4G’ LTE, plus carrier aggregation to up to 150mbps, and broad worldwide compatibility for 21 different LTE bands. Lastly, with its new ‘Download Booster’ feature the S5 can combine your Wi-Fi and 4G LTE connections together simultaneously, delivering NBN busting downloads speeds from your smartphone.

The GS5 has taken its fitness tracking and coaching up a notch, with the addition of a heart-rate sensor, which is situated next to the phone’s flash.

You simply hold your finger over the sensor for a few seconds, and Samsung’s S-Health 3.0 app will keep track of your heart rate. The phone can also be used as a pedometer, and S-Health will track your steps, calories, workout time and distance, and will let you know when you should increase or lower your exercise intensity.

Other surface changes include a rubber stopper over the USB3 connector, which is presumably there for water resistance but could be a bit finicky to move whenever you want to charge the phone. While the single button doubles as a fingerprint scanner, it doesn’t look or feel different that the button on the GS4.

While many expected to see full metal body, the S5 has the same glass front, plastic back configuration of the S4.

Only now you’ll have a choice between four different colours, which are part of Samsung’s ‘Modern Flash’ design language. These include Charcoal Black, Shimmery White, Electric Blue and Copper Gold. The cases have a perorated texture, and some of the colours have a slightly metallic finish, adding a sense of glamour, or at least that’s what Samsung’s designers have intended. While the white option has a matte appearance, it looks like it could stain over time.

And there’s a larger 2800mAh battery in the S5, which is predicted to provide 390 hours of standby time and 21 hours of talk time, Samsung has created a novel Ultra Power Saving Mode, which basically throttles back the GS5 to its bare essentials, such as making and receiving calls, mail and internet browsing, and the screen is reduced to monochrome rather than colour.

When entering this mode, you’re able to choose 3 additional low-power apps to add to the mix, such as SMS or a voice recorder, and you’re given a calculation of how much additional time your phone will last versus the normal power saving mode.

Ultra Power Saving mode is a great idea for when you only have a tiny bit of charge left, but still need to keep your phone on for an important phone call. It’s also handy if you’re taking your S5 camping, or plan to be away from mains power for a long period of time, and want to potentially double (or more) your phone’s charge life by only using a few basic functions and without a colour display.

Though more a step up than a giant leap from the S4, the Samsung has set a new standard with features make sense for Australians. Dust and water resistance will certainly lengthen the lives of many phones, and the fingerprint scanner adds an additional layer of security for online and contactless transfers. The Ultra Power Saving mode means more time between drinks, and ideal for long trips away from power.

With Australia having the world’s best 4G speeds, the broad LTE support and Download Booster will make very short work of large transfers.

Fitness coaching and a built-in heart rate sensor will appeal to a country that loves sport and fitness, and the 16 megapixel camera and photo enhancements will help you take better photos of friend family and our beautiful scenery, and you’ll see plenty of detail via the full HD display.

All up, there’s a lot to like about the S5, and it will be the phone to beat once released in Australia in the coming month.