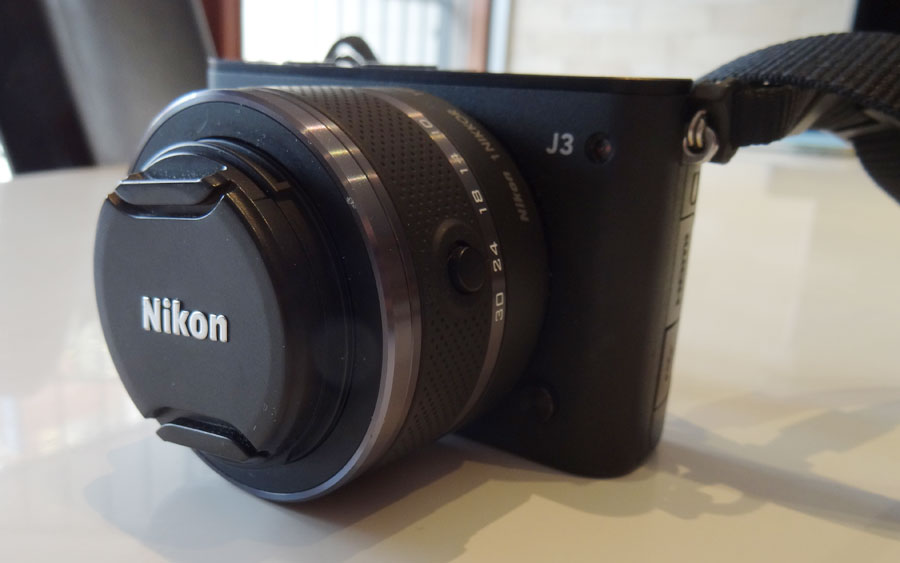 While smaller than DSLRs, interchangeable cameras are often still quite big, and that’s something Nikon would like to change with the J3, a pint-sized camera offering compatibility with Nikon’s “1” range of lenses and a body that will fit into a small bag nicely.

On the surface, the Nikon J3 doesn’t appear to be a huge shift from what Nikon first launched in the J1 in 2011, with a similarly compact design with a few buttons littered around the top and the back.

Some of these have changed in position since we saw the model back then, and Nikon has given the J a design closer to that of its other cameras, moving the mode wheel to the top of the camera instead of sitting at the back, while keeping the shutter, power switch, and record button up top.

The rear of the camera still features a directional pad with click wheel around it, with various menu buttons on the back around a 3 inch screen which, while being the same size, now supports twice the pixels as the first model.

Inside the J3 is a sensor for taking up 14 megapixel shots in either RAW or JPEG, up to 135 focus points, and low-light sensitivity supported up to ISO 6400.

It’s been a couple of years since we first looked at the J series, but from what we recall, the basic idea is still in with this updated model: a small interchangeable lens camera you can fit in a handbag without thinking that will take high quality shot when you need it.

Picking up the J3 you can see that, yes indeed, Nikon has continued with the compact design in this body, creating a reasonably slim compact camera that doesn’t stray too far from small digital cameras, provided you forget about the lens protruding from the front.

That lens is certainly nowhere near the size of Nikon’s digital SLRs, and with a lens ring of 40.5mm, it’s much smaller than the smallest of lenses for either an APS-C or full-frame based camera.

The small lens we played with on the J3 was the 10-30mm, and with the small sensor inside the camera, makes the lens perform closer to a 27-81mm, similar to the range you find on most kit lenses, albeit in a relatively diminished form-factor.

In the hands, the combination of small lens and basic body makes this camera noticeably small, especially in comparison to the mirror-less cameras we normally see.

Nikon’s use of plastic in the build comes off feeling better than the cheaper plastic cameras we’ve seen thanks to the amount of resistance it offers in the hand, and reminds us more of metal cameras out there, helped in part with a metal brushed steel top included on the top of this camera.

The shift in button placement is also far more effective here, and with the mode selection wheel on top, using the J3 is closer to using any other camera, since the wheel is in the place it should be.

Once you start getting to use the J3, you find that it seems to orient itself around automatic modes.

The first option is for a motion snapshot, which takes a tiny video, slows it down, and attaches generic music to the back to make the “motion snapshot.” The next two modes are “best moment capture” and the regular “automatic” mode, which both aim to make it easy to take photos whenever you want.

Then there’s the creative mode, and that’s where there’s fun to be had, offering your regular burst of manual modes, as well as backlighting and night modes, showing you an image alongside each for when these are suitable.

We jumped into both shutter and aperture modes to take photos at a nearby park and found that the control ring on the back made these modes useful, even if you had to keep pressing the function button on the directional pad in order to select the right mode for you at the time.

Not useful if you’re trying to switch between aperture and manual quickly, and we really wish Nikon had — in moving the control ring — also put the manual modes on the control ring where they belong (and are on other cameras).

The images looked great from the camera, though, and while the 10-30mm is closer to being a kit lens than anything that would perform on a pro level, we found decent bokeh, excellent clarity and sharpness, and results that we were happy with.

While the performance is really strong in this camera, the choice of modes is not, with options based around the idea of automatic shooting on offer.

In fact, while the “creative” area is where you find the creative and arty modes, there aren’t many to choose from.

We were particularly dismayed to find that there was no black and white mode, and only a smattering of artistic choices, including night landscape, night portrait, backlighting, easy panorama, soft, miniature effect, and selective colour. Even the modes that we expect to see here — popping colours, sepia, and monochrome — are missing in action.

The battery life isn’t amazing, either. You might get 200 shots if you’re lucky, and once the battery starts to really wind down, you can’t even switch the camera into a playback mode to go have a wander through what you shot, as it will simply shut down.

The Nikon J3 is one of those cameras that feels fantastic in the hands and is barely noticed in luggage, but because of the lack of its manual or creative controls, won’t be for everyone.

Ultimately, if you want simplicity, we’d suggest looking at the Nikon J3, because it has that in spades.