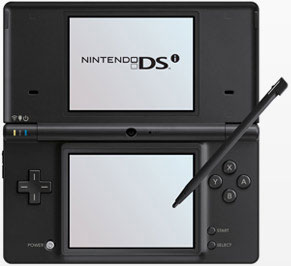 Store and play music with Nintendo DSi Sound. You can also play with any music that you have on an SD memory card – make your favourite songs play faster! Learning a foreign language? Slow down the playback of someone speaking in that language so it’s easier for you to learn! You can also record sounds using the microphone, and edit them to create new sounds.

Nintendo DSiWare will not only be games you can download, but also practical applications. Nintendo will launch a variety of applications, giving you the option to download the applications that work for you. This will further personalise and enhance the functionality of your Nintendo DSi.

The new features also include the dual LCD screens being 17 per cent larger than those on the Nintendo DS and PictoChat is now available in colour as you can choose between a black or rainbow pen!

Nintendo DS software is compatible with Nintendo DSi, except for software that requires the Game Boy Advance cartridge slot, as this has been removed resulting in a slimmer Nintendo DSi.

The Nintendo DSi will have an RRP of $299.95. It will be available in matte black or matte white, inclusive of built-in memory, Wi-Fi functionality, calendar with memo function and touch screen, Nintendo DSi is a more portable, personalised experience. And that date again, April 2.