Nintendo flicks the Switch with a new era for fans 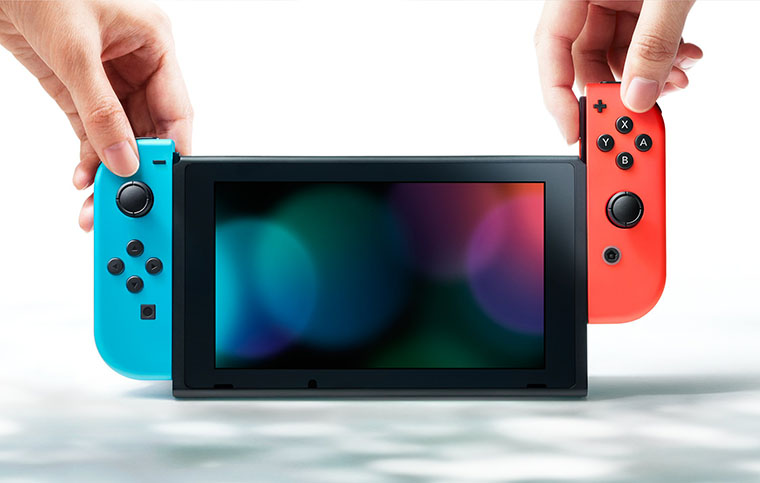 The big N is well known for marching to the beat of its own drum when it comes to console gaming and its soon-to-be-released Switch machine proves this more than ever.

The games console, hot off the production lines and heading to homes now, delivers some interesting new ideas and it doesn’t just focus on more powerful specifications like its competition. Instead the Switch, like the Wii before it, aims to change the way we play.

We got to enjoy the Switch at an exclusive pre-launch event and the early signs are intriguing.

The Switch blurs the distinction between mobile games machines and home consoles, as Nintendo’s new toy does it all.

Indeed, what Nintendo has delivered here is a versatile device that has three distinct play modes, thanks in part to its built in touch display.

Firstly you can play with the Switch as a stand alone mobile device much like a GameBoy.

Further you can play in “portable” mode with the screen sitting up on its inbuilt vertical stand and the Switch “Joy Con” controllers detached. In this mode the machine is a self sufficient console setup, offering mobile multiplayer social fun.

One of the Nintendo promotional videos presents players having a quick go head to head on the one machine at a bus stop and this sort of play really is a cinch to enjoy anywhere two people can sit together. This kind of play is unique to the Switch and we can see it being a major draw card for the console.

Finally, you can use the Switch in a more traditional mode. You can simply plug it into the TV and the inbuilt screen on the console stays off while your TV presents the action in gorgeous HD. In this mode the machine works in a similar fashion to the Wii. The motion control Joy Con joypads can be used, or there is a larger more conventional joypad you can play with too. This larger pad feels like the hybrid offspring of a PS4 and Xbox One controller, which means it is a delight to play with.

This innovative ability to transform and offer home and away fun to suit the needs of the player is at the core of the Switch’s appeal. It is a really versatile machine that you can play anywhere anytime, while delivering the best performance and experience.

On top of this the Switch can be used in a “daisy chain” arrangement, with multiple consoles connected together for instant sports tournaments. Basketball, soccer and other team sport fans are going to love this option.

If this wasn’t enough, the Switch will play simple head to head games with the smaller Joy Con hand controllers, where the point of play is to look at your flesh and blood opponent, not the screen. If you check out some of the promotional pics we have provided you’ll get the idea.

Imagine using the Joy Con in a mock sword fight, or as a six shooter in a pretend gun battle? The screen will only be there to score. It sounds weird, but the ideas are interesting, and they work better than we’d have thought having had a go at the Switch launch event last month.

The Switch also swaps seamlessly between home console mode, with it playing in 1080p on your TV and 720p “mobile” mode when playing on its own screen. The visuals in mobile mode are amazing too and far exceed those possible with Nintendo’s current machine, the 3DS.

There are some major launch games coming to the Switch too. Most amazing among these is the new Zelda game, “Breath Of The Wild”. The Zelda demo on show at the launch event was incredible, as we explored the most beautiful 3D world the acrobatic protagonist, Link, has ever encountered. The game features deliciously colorful cell shaded visuals and Nintendo claims this is the biggest adventure in the series by a long way. Certainly the massive countryside areas we got to explore as a part of the demo were eye-catching.

Link also moved fluidly and playing with his trademark bow and other weapons was a joyful experience. “Breath Of The Wild” could well be the best game we see on any platform this year and so having it launch with the Switch is a major boon for Nintendo.

On top of this there are around eighty games in development and Nintendo stars like “Splatoon 2” and “Mario Kart 8” are coming to the machine during launch. Later in the year there will also be a totally new Mario game too.

The Switch could well be a bolt from the blue that surprises and impresses all who have a go with it.

Remember Nintendo shocked the world and achieved massive success with the unconventional Wii roughly a decade ago.

The WiiU might have been a less stellar offering, but with the Switch it feels like Nintendo are back on track, producing a games machine that dares to be different and compelling.

The Switch innovates and packs a bunch of clever ideas that could well change the face of console gaming forever.

We just can’t wait to get our hands on it.