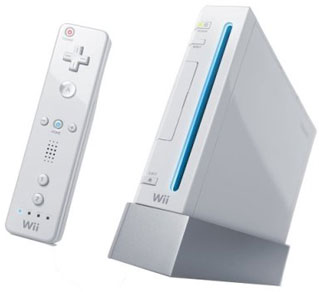 The games console with one of the strangest names on the planet (it’s pronounced ‘wee’) is also one of the most innovative. In fact, with its potential to change the face of the gaming landscape, Wii may be on the verge of a new era, if you’ll pardon the pun.

The $400 Wii package comprises a square white console unit and stand that plugs into your TV or AV receiver, a wireless sensor bar that connects to the console and receives wireless commands from the battery-powered paddle-style Wiimote controller. Basic composite cables are supplied, but if you have a plasma or LCD the $50 component cable options will deliver better picture quality. The console also supports an SD slot, USB port and a DVD drive for games.

Games data can be saved to SD memory cards, which weren’t officially released at the time of publication, but in lieu of their arrival, GameCube memory cards will suffice. The USB port can’t be used to save games either, but will enable future hardware upgrades such as a hard drive or DVD player, although no announcements have been made to this effect.

Despite its DVD drive, the console is not a DVD player (a modification chip is required if you want to watch movies). Nor is it the high definition, hard drive-toting, networked multimedia online multiplayer gaming machine that is the Xbox 360 or forthcoming Playstation 3. Instead, it presents as the most affordable ‘next generation’ games machine available and, certainly, lacks for no important ingredients if you want to have fun.

The machine’s appeal is very much tied to the wireless Wiimote nunchuck-style motion sensitive controller. The unit is made up of two separate controls that are daisy chained together. Firstly, there is the larger flat slab-like controller that looks more like a conventional joypad (or even a TV remote). This ‘paddle’ unit has a digital ‘D pad’ as well as a trigger button on the underside of the controller, plus a variety of other buttons on its face.

The system doesn’t rely solely on joypad input and button presses. Instead you wave, punch, bat, swing, volley and twist the controller itself and these movements are transmitted to the receiver to become your responses to the challenges of gameplay. This leads to a more immersive style of gameplay, as your real-world movements become a part of the action on the screen. You become more physically involved in the action as a result.

For example, when playing Red Steel you’ll push the Wiimote controller forward to stab an assassin and the act of physically moving your arm changes the relationship between you and your onscreen avatar. Quite simply, you feel much more a part of the gameworld, as your real-world movements become more closely tied to what is happening on the screen.

Similarly when playing racing games, like GT Pro, Excite Truck or Monster 4×4 the Wiimote very easily becomes a great virtual steering wheel. You don’t even need a different controller. All you need do is pop the paddle from the Wiimote into a wheel-like plastic housing and the sensors in the paddle correctly interpolate your steering inputs. You get these wheels with the racing games available for the Wii.

The great thing about this is that, for the first time, those digital drivers who steer with their bodies while holding the controller will actually be doing the right thing, rather than just looking a little silly.

This sense of being more directly physically tied to the games you play using the Wii is common with many other titles and is a really amazing and enjoyable feeling. When playing Ubisoft’s slapstick Rayman Raving Rabbids, for example, you can belt badly behaved bunnies with the flick of a wrist. The Wiimote-based features in the game require a lot of physical movement from the player, and you can really get into a lather as you take on the many different sub-games and challenges. The sense of power and control is superb, and it is also mighty funny.

Raving Rabbids is available for other consoles, and with these button presses will largely replace the physical activity of using the Wiimote. As such, the title might prove an interesting test case for the validity of the Wii’s approach, allowing gamers to assess how much difference a great sense of physical involvement makes to the enjoyment of play.

It is also possible that the Wii could be the game system for the whole family. Already on fan websites many people are talking about how the system has found new friends, as girlfriends, parents and others who typically don’t play games seem to find appeal in the Wii approach.

When compared to the competition the Wii represents fantastic value. Up to four players will be able to play at the same time, providing they all have controllers. You only get one remote control when you buy the console and you may want to purchase more so you can play against your friends. These are $70 for the main part of the controller and a further $30 for the nunchuck. Some games will only require extra nunchucks, while some will require the Wiimote and the nunchuck. These requirements can be found on the back of each game’s box.

There is also a bonus package that includes a remote control (minus nunchuck) plus a compilation package of games, for $79.95. The compilation, called Wii Play, includes games such as air hockey, table tennis, tanks battles, duck hunt, and pool.

You can buy more conventional joypads too and these are useful because the Wii is completely backwards compatible with the Nintendo GameCube. This is a boon for anyone with a library of GameCube titles they’d rather not retire.

The Wii is a low spec?d console if you?re making a comparison with its competitors, but when it comes to pure gaming it has much to offer, especially for social play with your friends. It?s an exciting experiment that offers a unique and fun style of gaming, and we reckon it?s a hoot.