Nissan LEAF to return to Australia in 2019 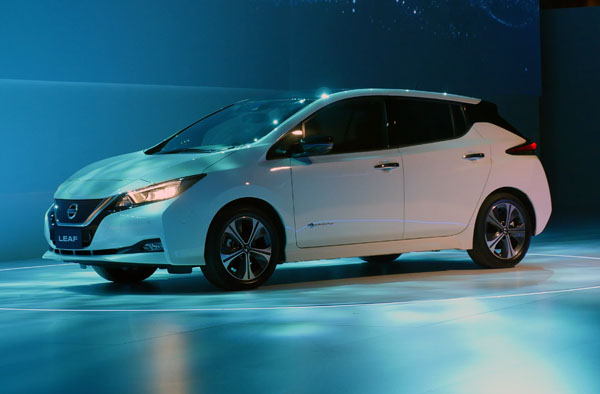 It will be going on three years since we’ve last seen the Nissan LEAF in Australia, but in the middle of 2019, it will be returning.

Nissan sold 635 of its all-electric compact following its Australian launch in 2012. But Nissan reckons things have improved since then. First, there’s now a much wider infrastructure of charge stations (you can’t use the installed base of Tesla stations). Second, there’ll be a significant dealer network (89 of them). And third, and most importantly, the Nissan has markedly improved the LEAF itself.

Of course, a big reason for buying the LEAF is its eco credentials. It’s labelled a zero-emissions car, and can indeed potentially be zero emissions as coal is phased out of our electricity grid. But this time around, Nissan is stressing the wonders of its electric car as, well, a car.

A big part of that is due to the particular virtues of an electric motor as a power unit. Consider: internal combustion engines have a quite narrow range of engine speeds at which torque is near its peak. Torque is the rotational equivalent of force and force is proportional to acceleration. That narrow range is why cars have gears. They are needed to provide reasonable acceleration at a range of speeds. The new Nissan LEAF has its maximum torque of 320Nm (up 14%) available at engine speeds from zero to 3,283 rpm. Yes, even if the motor isn’t turning at all, maximum torque is available. Right from the first tap of the “gas” pedal.

That makes for a very different driving experience, with steady, solid acceleration from a standing start. And since the EM57 AC synchronous motor in the Nissan LEAF rotates, there’s a smoothness that isn’t possible from cars with engines using reciprocating pistons.

All that would be of little use if the battery couldn’t take the car very far. The new Nissan LEAF uses equipped with a 40kWh, 350-volt battery pack. That’s an increase of 65% over the 24kWh of the previous version. If you were driving at top speed, thereby drawing that full 110kW of power, it would be exhausted in less than half an hour. With normal driving, though, and taking into account such things as regenerative braking, Nissan reckons the new LEAF is good for 270 kilometres. That’s 100 kilometres further than the old model.

It notes that according to a report from Kantar TNS, commissioned by Nissan, the average Australian driver only travels 38 kilometres per day. Nissan LEAF drivers could conceivably only have to recharge weekly. But I will have a little more to say on that point below.

The LEAF will recharge from a standard 240-volt output – well, a high capacity (15 amp) one. That takes around 24 hours from empty, but you’d rarely be recharging from empty. However, it seems that around 70% of Nissan LEAF customers have a Mode 3 charging adaptor installed in their home. These allow charging from the empty warning to full in 7.5 hours. You typically see this kind of charger installed at recharging stations.

But there’s also a second charging socket (both are under a panel on the nose of the car). This one supports Mode 4 fast charging from CHAdeMO stations. These can pump 50kW of power into the battery, allowing 80% charge in one hour.

It turns out that you can use the batteries in the car to feed power back out through the standard port. Andrew Petersen, CEO Sustainable Business Australia, said that a dealer had described how he could use the inventory of Nissan LEAF cars. He could charge them up in his solar power-powered store during the day, and use the cars to power it during the night. Kind of like them being Tesla batteries.

I’d certainly hope that isn’t the norm. Batteries have a finite number of charge/discharge cycles before they start to lose capacity. I wouldn’t want my new car to have been used in this way.

Australia will be getting just one version of the Nissan LEAF. Basically, it’s equivalent to the US SL model, which is the one with everything, including “black leather-accented seat trim”, a seven-speaker energy-efficient Bose sound system, Apple CarPlay and Android Auto, an eight-inch touchscreen display, satellite navigation, and nice allow wheels.

Plus, it has the full range of “Nissan Intelligent Mobility” features. These include a host of driver assist features:

And it has all the common stuff like ABS. And things unique to electric cars, such as “Vehicle Sound for Pedestrian (low-speed)”. I guess the cars are too quiet around town without that, risking pedestrian safety.

The headlights use LEDs and switch on automatically. There are cruise control and traffic sign recognition.

And most fun of all, there’s the “e-Pedal”. The car comes with an accelerator pedal and a brake pedal, like a regular automatic car. But you can switch it to “e-Pedal” mode, and the accelerator pedal then combines both functions. If you back off on the pedal, regenerative braking is engaged to slow you down. The more you back off, the faster you slow. The brake lights illuminate so that people behind you aren’t surprised. You can come to a complete halt, even on up- and down-grade slopes. The brake pedal still works, in case you need to stop even more promptly.

The new Nissan LEAF is about the expected size for a 1.6- or 1.8-litre car, but weighs perhaps thirty per cent more, thanks to the battery. It certainly looked comfortable and well-appointed. Unlike some cars, it doesn’t scream about its differences visually, apart from the Zero Emissions logos in several places on the body.

Nissan anticipates the release of the Nissan LEAF here in the middle of 2019. It isn’t ready to suggest even a ballpark price yet. I’d note that the equivalently specified SL model in the US is priced starting at $US36,200. At today’s exchange rate that puts it north of $AUD51,000. Actual final pricing is likely to be higher than that, short of significant exchange rate movements.

Nissan noted that there’s a trade-off with costs. You pay more up front, but running costs are lower. Consider, a full battery will give you 270 kilometres (we’ll just go on the claimed figures). That uses around 40kWh of power. Ignoring losses, that means buying 40kWh from the power grid. At a price of around 20 cents per kilowatt-hour, that works out to $8 for 270km. My own comparably sized Japanese car has a range of around 540 kilometres on a tank of petrol. Half filling the tank (for 270km) generally costs around $35.

According to the Australia Bureau of Statistics, the average passenger vehicle in Australia travels around 12,800 kilometres per year. For the Nissan LEAF, you’d be paying around $380 for that distance. For my car, around $1,660.

It sounds to me like Nissan is onto something regarding those running costs.

A note on distances

I’d quibble about one thing: the average daily 38 kilometres of car use in Australia. The Kantar TNS report sources that to a 2017 Australian Bureau of Statistics survey. That figure didn’t appear in the survey. I think it was derived by dividing the average annual number of kilometres driven by “motor vehicles” by the number of days in a year. This worked out to 37.58, easily rounded to 38.

But “motor vehicles” seems to include trucks and so on in addition to cars. From the same report, I could calculate an average for “passenger vehicles”. That worked out to 35.14 kilometres, so the Australian average is even lower.

But how meaningful is that number? Distributions matter just as much as averages. I might catch the bus to work every day but drive across the Nullarbor a few times a year. You and ten other people might drive your cars an average of two kilometres per day, while an Uber driver might do 500 kilometres.

The Nissan LEAF has become hugely more practical with the increase in range, but potential purchasers should still consider not just their average, but the distribution of their driving practices.

Read more from Nissan about the LEAF here.