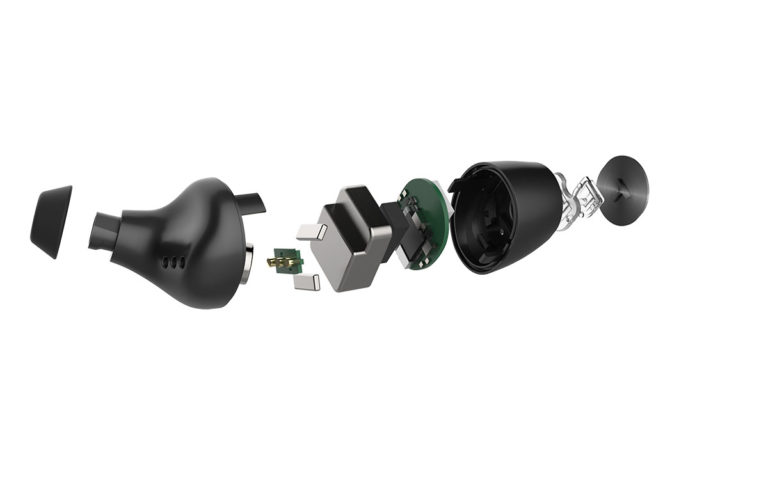 I had never heard of Noble Audio before its Australian distributor, Busisoft AV, asked if I wanted to review the Noble Falcon true wireless stereo earphones. It turns out that Noble Audio is a Texas-based maker of in ear monitors. The difference between IEMs and regular earphones or earbuds? Their higher quality. Most of Noble Audio’s product lines start in the high hundreds of dollars, and some go up into many thousands. Noble Audio will even custom mould some models to provide a perfect fit for individual customer’s ears.

But that isn’t what happens with the Noble Falcon earphones. These follow the usual conventions for true wireless earphones. The buds are small and come with three different sizes of silicone tips. They each weigh 5.3 grams with the mid-sized tip. Unusually, that size proved best for me. I normally prefer the largest size. The case is compact, too, at 62mm wide by 36mm tall and 32mm thick. With the buds inside it weighs 39.2 grams.

Each bud has a button on the back. Controls for Play/pause and managing phone calls are duplicated on both sides, with a single press or a press and hold. Press and hold also invokes “Siri” says the manual, but it works the same for Android Assistant. Double and triple presses on one side skip tracks, and on the other side adjust the volume.

The front of the case has a USB Type-C socket for charging, topped by four small LEDs which show charging progress. Despite the small size and light weight of both buds and case, Noble Audio rates their run time at 5.5 hours at full volume and up to 10 hours at 70% volume. The case is good for three full recharges, so you could get up to 40 hours total.

The buds are IPX7 water resistant so they should be fine if you’re out in the rain or sweating during exercise.

The spring loading of the control buttons was pretty much spot on. It was stiff enough so that I didn’t accidentally trigger them in everyday activities, but soft enough so that I could do double-presses reliably, and even managed to get triple presses to work most of the time.

The Noble Falcon earphones use the Qualcomm QCC3020 chip which implements “True Wireless Stereo”. Noble explains that this “is a new connection method that allows independent left and right connections in combination with TWS+ compatible smartphones.” This apparently improves connectivity and reduces latency. I used my Huawei P30 Pro phone, but I couldn’t find authoritative information on whether it is “TWS+ compatible”. But both earbuds did pair with the phone, showing up separately. However only one connected at a time.

The connection is via Bluetooth 5.0 and the SBC, AAC and aptX codecs are supported. My phone confirmed the aptX connection.

The Noble Falcon earphones use 6mm drivers with dual layer diaphragms, one constructed of carbon fibre and the other with resin. Noble says that this halves distortion compared to “typical graphene drivers”. This is paired with a DSP – Digital Signal Processor – which is used to tune the sound. The Noble Sound Suite app – available for Android and iOS – can be used to control the earphones and to apply EQ via the DSP.

The connection reliability with my Huawei phone was middling. In my usual test location, I got a perfect unbroken signal out to twelve metres, and well beyond twenty if I held my head the right way with respect to the phone. The connection was a bit iffy, though, when I had my phone in the back pocket of my pants.

To use the Noble Sound Suite you first have to update the firmware in the buds. A separate Noble Upgrade App is required for that. I installed it on my phone – the Android version – and ran it, and pretty much nothing happened. Consulting the Noble Audio website made it clear that you had to do some button presses on the buds to make them receptive to the upgrade. That done, it worked well, taking less than five minutes per bud. Yes, you do them separately. The online instructions could have been written a little better. After a couple of failed attempts with one of the buds, I found that I had to leave the lid of the case open to allow the process to happen. Or perhaps it was because I held the button down for longer than the indicated 12 seconds. Who knows?

Anyway, in the end the firmware update was successful. Despite my whinging and uncertainty, the whole process took less than fifteen minutes, including finding and reading the instructions on the Noble website. Then the Noble Sound Suite readily connected to the buds. It allows you to change the default operation of the double and triple button presses – it’s really not worth changing – and adjusting the EQ of the sound. Nothing fancy there, just a good old-fashioned ten-band graphic equalizer, with ±12dB adjustments at each frequency (at equal logarithmic intervals from 31 to 16,000 hertz). There are three “Custom” presets to which you can assign different sound profiles.

Listening with the Noble Falcon earphones

After charging up the Noble Falcon earphones, I paired them with my phone. The bud that connects to your phone is whichever one you take from the case first. It seemed to make no difference in practice. I started with a podcast for no particular reason. My instant impression was: bright! Excessively so. That was disappointing. At that point I didn’t know about the EQ adjustment in the Noble Sound Suite app. So I was wondering about the statement on the Noble Audio website with regard to these earphones: “TUNING BY THE WIZARD HIMSELF!  The Falcon was personally tuned by John Moulton (a.k.a. the ‘Wizard’).” Mr Moulton is the founder of Noble Audio. I wasn’t sure that I agreed his idea of sound balance.

But then I read up on the Noble Falcon earphones and discovered the apps. After doing the upgrade, as previously described, I used the Noble Sound Suite app to adjust the EQ. All I had to do was pull down the 2kHz and 8kHz bands by 1dB and the 4kHz band by 3dB. And that fixed the excessive brightness. I played a little with the bass EQ but ended up leaving it unaltered because it’s level was pretty well perfect.

And with a bit of EQ?

With those changes, the sound produced by the Noble Falcon earbuds was wonderful. Really. Of course, I moved on from podcasts to real “Master” quality music streaming from TIDAL to properly assess the audio quality. Tracks from Rush’s album Permanent Waves sounded gorgeously balanced and sounded as though they were being delivered by true high fidelity headphones, not mere $200-ish wireless earbuds. Whatever volume level I wanted – within reason – was available. The dynamics impressed me. The drums poked through the mix in the proper manner. The buds delivered all the little subtle details within the music in full. Moving over the Billie Eilish, the thunderous bass of her tracks was delivered with remarkable accuracy, while preserving the sometimes beauty and vulnerability of her vocals. That bass was in excellent balance and nicely tight, not at all overblown.

Sometimes I use the word “magic” to describe the performance of a piece of equipment. There’s plenty of gear that operates competently. But some equipment creates a special audiophile magic that’s hard to define, but leaves the listener convinced that the real thing is being delivered. The Noble Falcon earphones come very close to scoring the magic word “magic”. That’s something that I very rarely experience with true wireless earphones.

The fact is, I truly enjoyed listening to music with the Noble Falcon earphones. And I can’t say that about many wireless earbuds.

The Noble Audio Falcon true wireless stereo earphones don’t look much different to most, but when it comes to sound quality, they stand out. As I write, they are reduced in price by the Australian distributor from $259 to $210. They are available here.