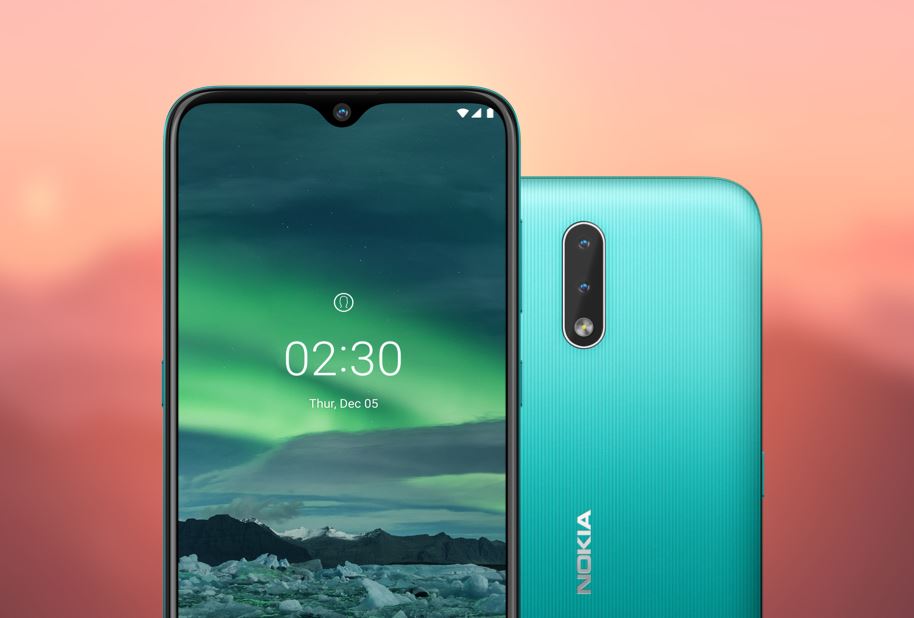 The Nokia 2.3 marks the beginning of the Nokia ‘.3-series’, in fact, the fourth generation under the brands’ new owner’s HMD global.

The hard thing in reviewing all these cheap phones is to declare a ‘winner’ because all have specs to match the price and all make a range of compromises to do so. And what is interesting is how fast technology changes. What was a 5/5 a few months ago is hopelessly outclassed by a new comer – rinse and repeat!

Yet none of the competitors admits this, all promising fabulous AI photos, significant battery life, pro cameras… Yes, I believe in Santa too but for $199 all you can expect is a basic phone with a social media camera.

For once – it would be nice if phones under $199 (well under $399) stopped all the marketing BS and told it like it is. Nokia is not too bad here, but we strip away the fancy faux metallised plastic paint job and get to the heart of the matter.

A faux metal ‘sand’ textured/coloured plastic back, teardrop screen with broad chin and bezels (lowish 80.7% STBR), Android One 9, micro-USB port (so yesterday!), and a dual-camera on the back. If anything, it has slightly more squarish and conservative looks than the competitors with their outlandish vacuum electrostatically deposited ‘deep purples’ etc!

The 6.2” screen is 720p, so pixelation is slightly noticeable on text. Auto-brightness can reach 500 nits, but it is closer to 400 (auto-off). There is some unevenness as well – bright in the centre and nearly 10% less at the edges. Black levels are weak (.35) and contrast is about 1200:1. There are no gamma adjustments.

It is not overly bright, contrasty or colour accurate (it is cool). There is no screen protection, and it will scratch.

Some reviews mention ‘Always on Display’ – it does not have that or a notification LED.

It is an entry-level (lower-mainstream) Helio ‘A’ processor whereas many in the <$199 bracket use the faster ‘P’ series. Paired with the 2GB (790MB free) single-channel LPDDR3-933 ram it is slow, choking at any attempt to multi-task. There is 16GB free of the 32GB storage. MicroSD storage to 512GB is only for data – not apps.

Our 15-minute test reveals it is capable of over 44,000GIPS, but every two minutes, it needs to take a big breath and drops back considerably until it cools again and back to top speed. It is not really an issue as this is no use case for this phone to be 100% stressed.

It is Wi-Fi N single band 2.4Ghz that archives 65Mbps/-40dBm at 2m from our reference NETGEAR AX12 router. If you need Wi-Fi speed, then you need a dual-band device.

Note that it only as a 3-axis accelerometer that returns wildly different pedometer results. It lacks many standard sensors although not unusual for this price bracket.

A-GPS is too slow for real-time navigation and took several minutes to find satellites.

Signal strength was -79dBm (good) and it was able to find the next nearest tower at -85dBm. It is fine for urban use.

All publicity mentions a two-day battery life – but what does that mean? Well, Nokia says that it is courtesy of AI-assisted Adaptive Battery technology. The AI-feature learns your app usage habits and prioritises power for the apps you use the most. Sorry, a weeklong test does not invoke any AI so we will just have to take its word for it.

We tried to get two days use, but the only way we could come close was just to use it as a phone and disable GPS, Bluetooth, Wi-Fi and set the screen to 100 nits (30%) with adaptive brightness off.

A 4000mAh battery is quite large, but a micro-USB 5V/1A charger is quite small. Charge from 0-100% took a massive seven hours of a slow linear charge – no fast charge here and a 5V/2A charger makes no difference!

Ring tone is 85dB (great), but music is about 65dB and quite harsh.

There is no sound signature – it has no bass, late mid and some early treble (harshness). Subjectively it has one of the poorer audio speaker experiences in this class.

It was adequate as a handsfree device, but we did find the single mic captures a lot of noise in that mode.

BT Codecs include SBC and LDAC (Opus). BT 5.0 is great, but our reference Sony WH-1000Xm3 (LDAC) would only connect using SBC. And we could only get to about 10 metres away without losing the signal.

It is stock Android updated by Google. Thankfully it is not the cut-down Android Go version that is for very low-end devices.

Nokia states it is ready for Android 10 and beyond so you can look forward to two years of software upgrades and three years of monthly security updates.

It comes with a dedicated Google Assistant button, Google Lens and all Google apps.

It has a 5 November 2019 patch – Nokia seems pretty good in rolling these out.

2D Face unlock works reliably down to about 200 lumens before failing.

This is the same primary camera as the Nokia 2.2. It uses a Samsung S5K RGB sensor and has added a depth sensor for bokeh.

It is quite good in day/office light, but the smaller 1.12um pixels mean low light needs a lot of post-processing.

Office light shots (600 lumens) are OK, but colours are a little washed out, and definition starts to suffer.

There is a ‘Recommended Shot’ feature, which captures images before and after pressing the shutter button as well as an AI-powered ‘Portrait Mode’ and low light settings.

Android One makes the Nokia 2.3 stand out in a crowded market. Nokia deserves to succeed if only to help HMD, a Finnish company to keep the Asian dominated ‘bastards’ honest. But I fear it is playing in the #MeToo sandpit instead of striking a new, unique Finnish path. And to be honest, that is what I thought of Nokia’s earlier versions – something a littel different.

When we reviewed the Nokia 2.2 here only last October, it was standout for value and it had a removable battery – 5/5. But since then a tsunami of lower-cost phones has emerged, and Nokia’s 2.3 is not so special any more. In fact, it could have had any brand on it!

For example, how can it hope to compete with the likes of BBK (now the world’s second-largest phone maker with OPPO, vivo, realme and OnePlus covering every single market niche? Its $199 realme C2 has better: specs; camera; processor; more ram/storage and a dual sim.

For me, after a few days of use, it was unexciting in every way. But that is what you expect of a $199 phone. And perhaps in that un-excitedness lies the secret – a simple good value phone that should last the distance and see Android 10 and maybe 11.

My best advice to Nokia is to go its own way and develop something the #me-too brands can’t offer.

Nokia 2.3
Android One makes the Nokia 2.3 stand out in a crowded market.
Features
8
Value for money
8
Performance
8
Ease of Use
9
Design
8.6
0
Positives
Offers a Nokia alternative in this crowded price bracket
Large battery
Nice looks and grippy back
Negatives
Slow, so slow charge
No IP rating (no issue) but plastic back could be fragile and scratchable
Average camera – fine for daylight
6.9