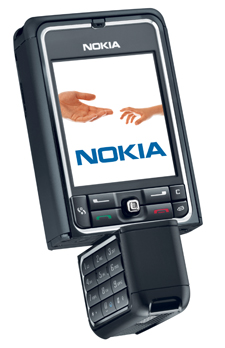 The 3250 is Nokia’s latest entry in the crowded music mobile phone market. It’s one of the most interesting phones we’ve come across thanks to a feature that allows you twist the bottom part of the phone. Depending on how much you twist it, the 3250 becomes a phone, a music player or a camera.

Nokia is clearly pushing the music angle with this handset and to help you get the most out of it the company has installed a custom music player application that allows you to control your music as well as change sound settings and view album art. Inside the box you get a 512MB memory card to load music, handy because the phone itself has only 8MB internally. The memory card lets you load about 120 songs.

There are a number of ways to put music on the 3250. Nokia supplies a USB cable to connect your phone to a PC and there?s even an application for ripping CDs. Alternatively you can use Windows Media Player to transfer playlists and music across. If you have a Mac, you’ll need to transfer music straight to the phone without any helper software.

Nokia also supplies a set of earphones and a remote control handsfree so you can skip and pause tracks without pulling your phone out of your pocket. To listen to music, you simply twist the bottom part of the phone 180 degrees to reveal dedicated music playback buttons.

The 3250 is a smartphone that lets you load your own applications as you wish. Nokia has supplied two applications, LifeBlog, for blogging from your phone, and Tunes Studio, for making your own ringtones. You can find many more applications online, ranging from 3D games to office suites.

As far as imaging goes, the 3250 has a reasonably high resolution screen and a two megapixel camera. Unlike most phones, the camera is located on the side of the 3250, and can be twisted towards or away from you, similar to the way you?d use a camcorder.

For a phone designed to play music, there were some curious drawbacks with the 3250. To begin with, it sound quality needs to be improved. Even when we applied the equaliser settings the music sounded flat and toneless. Skipping tracks is also frustratingly slow, taking up to five seconds at times.

The phone’s menu system takes some getting used to if you haven’t had a smartphone before, but the general concepts are the same. It can get a little sluggish at times, but overall performance is good.

The numeric keys are quite small and spaced closely so SMS addicts should look elsewhere. Even the joystick, used to move around the menus, is fiddly to use and becomes irritating if you have large hands.

Battery life is rated at only three hours of talk time, or ten hours of music playback. In practice, it means you should be able to use the 3250 for two days if you listen to a couple of hours of music each day and perform some call functions.

The 3250 sports an eye-catching design and a very reasonable price that will see it become a popular phone.

Though there are some issues with usability, the small size and impressive list of features makes this a good phone for those with active lifestyles.