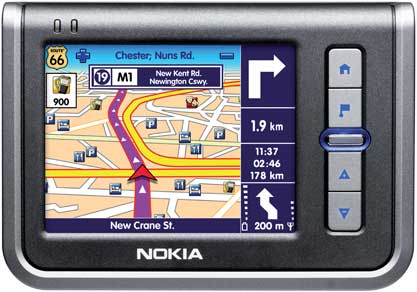 Nokia’s standalone GPS system has the basics of navigation covered, and even some frills to boot. It’s a bit baffling, however, that it lacks Bluetooth given the asking price.

Nokia’s 330 Auto Navigation system (or GPS to you and me) is, in many ways, a terribly conventional unit. It’s got a reasonably stylish and small design, reminiscent of early Navman GPS models. It uses Navteq’s map offerings – no great surprise, as Navteq is now wholly owned by Nokia – and comes with a full Australian map. One area where the 330 differs from most of the GPS pack is in the GPS chip used within. Rather than the terribly common SiRFStar III, the 330 uses the SiRFStar GSC3. Unless you’re a technology nerd (or electrical engineer), the difference is probably moot, but it is a difference nonetheless.

It strikes us as very odd indeed that the Nokia 330 comes with no Bluetooth – which means no way to interface it with your Nokia (or other) mobile phone. Bluetooth compatibility has been trickling down even to the cheaper GPS units on the market; to omit it from a unit at this price seems like penny pinching to us.

Where the 330 does try to justify its asking price is in the additional features it offers. Many GPS units will work as simple photo frames – the LCD display is already there, after all – but the 330 goes further than that, offering MP3 music playback and even video across a wide raft of formats. We’re stil not convinced that having your GPS playing back Speed while you’re driving is a good thing, mind you. Critically, you can’t use the music playback feature and the GPS navigation at the same time, which makes that feature functionally useless in our estimation.

One thing that makes the 330 stand out is the way you search for destinations. Where most GPS units use a drilling-down metaphor, where you enter suburb, then street, then destination, the 330’s Route 66 software uses a more Google-like interface that expects you to enter as much of the address as possible; it then presents you with the most likely matches against the data you put in. As the unit relies on a touchscreen keypad, this isn’t the quickest way to enter data, and because of the way it searches, there’s no autocompletion, as you’d expect on a drilling-down-style unit.

The 330 performed functionally well aside from this searching quirk in our tests. Like most GPS units, there was a certain amount of dud map data, and it got a little bit stuck on the way to drive a particular route we chose.

While there’s little that the 330 does badly in terms of basic navigation, there’s also not a whole lot that makes it stand out in the crowded GPS space. The same amount of money can get you a whole lot more GPS, and cheaper GPS units offer the same feature set. It’s truly weird that the 330 can’t synchronise up to a phone – even the limited capability to perhaps only synchronise with Nokias would be a plus – and unless you’re absolutely addicted to Nokia-branded merchandise, we can’t see too many reasons to avidly track down the 330 Auto Navgation GPS.