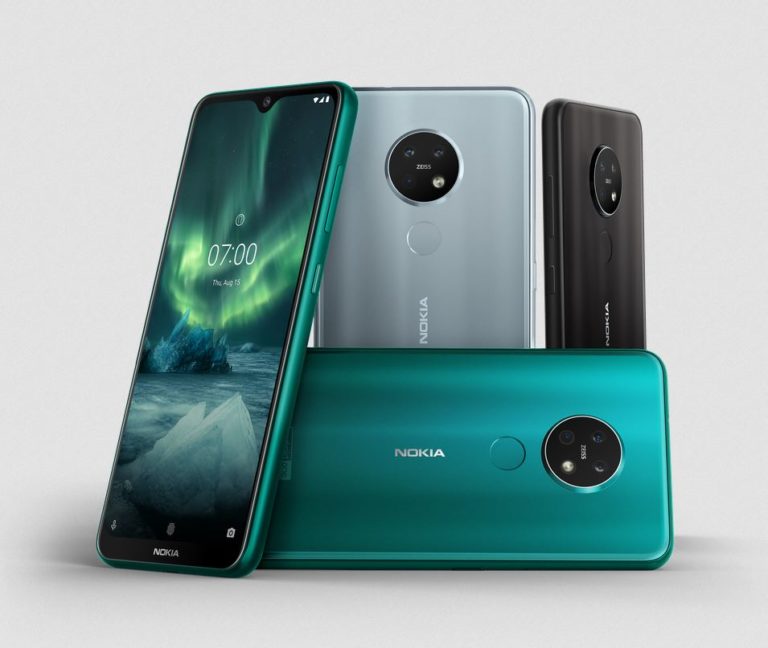 The Nokia 7.2 is part of it’s late 2019 ‘.2’ refresh and frankly its more heart replacement surgery than a refresh. Its internal name was ‘Daredevil’ presumably after Marvel’s blind vigilante.

But during our tests, the Nokia 7.2 was not the stellar performer suffering severe CPU throttling (affects gamers and videographers), inconsistent ‘actions’ (it does something one way and differently after a reboot or cool down), low battery life (under load) and long recharge times (with its standard 5V/2A charger).

Last years 7.1 model scored 4.9-out-of-5, and I was expecting even better. I am not saying it is bad, but it is not the class leader that it could and should be. If I had to surmise, Nokia knocked itself out on the camera and put what little money it had left into a pretty coloured case and internals.

This means it notches up to mid-market whereas the previous 7.1 was $499 and the king of the mass-market.

So it is competing with the best phones under $500, and many of these have 48MP cameras and larger, faster-charging batteries. Then it competes wth the sub-$600 phones like the impressive OPPO Reno2 Z with 6.5” AMOLED, 8/128GB/micro-SD, VOOC 3.0, and 48MP quad-camera.

Missing (compared to the competition)

I am tired of grey – space grey, charcoal or any other grey or black (Nokia – get the hint and send me pretty shiny things). Sure it is a nice matte finish, but the Cyan Green or even Ice adds a little more pizzaz to compete with some beautiful and wildly coloured phones in this segment.

The camera ‘circle’ above the fingerprint reader protrudes 2mm and has glass to protect the lenses. The only excitement is that the power button is also a notification LED.

In other words, it is yet another nondescript glass slab missing the copper and stainless highlights of the 7.1.

Blacks are more glowing charcoal (like the glass back) and colours are too cool – no matter what setting they were always cold. The presets did not alter colours significantly, and out of the box, it was nowhere near 96% NTSC claim. Playing Youtube HDR content, despite using the SDR to HDR switch, results in SDR content.

Screen summary: Bright enough but not a class leader (you are going to see a lot of reference to this)

As a result, it has a lower speced SoC, GPU, and higher power draw than later chipsets. It was also in 2017/18 phones like the Nokia 7 Plus, BlackBerry Key2 and OPPO R15 Pro.

It also is 14nm versus the later 10-11nm, so it runs hotter and uses more power – an excellent segue into CPU throttling.

CPU Throttling is obviously a heat design/management issue. But should you care?

The answer is that for general phone use, occasional browsing, internet, email and music – no. During our tests, we did not notice a lag in normal use.

But for any CPU/GPU intensive task it will be slow – games, video shoots, Youtube, to name a few.

And here is where the ‘inconsistent actions’ comment comes in. Apart from unexplained app crashes, when it got hot, it would give a different result to when it was at normal temperature — for example, a screenshot when hot was 0 Bytes (no image) and when normal, 250kb. Or taking a photo would result in long focus and shutter lag. I guess it did not help that ambient temperatures were 33° during the test.

In fact, compute – an overall performance indicator at 613 is far lower than the comparable phones. And it fell over several times on this test.

And 4GB is lower than most in this category offering 6 or 8GB, and 128GB e-MMC is slow flash memory over faster UFS storage.

Using Cell Info light – 5GHz Signal strength at 1 meter from our reference Netgear AX12 router is -27dBm, (excellent) but it only achieves 433Mbps (half of what we expected – 866Mbps).

My guess is that this indicates a 1×1 SISO RF antenna implementation although the SD660 is capable of 866Mbps, 2×2 and MU-MIMO.

GPS is also quite slow – I suspect exacerbated by the SoC. It accurate to 10 metres, and can perform turn-by-turn navigation if you are careful – we missed two turnoffs! Route recalculation is also slow.

Signal strength is OK at -89dBm. But it is variable shooting up and down from -101 (poor) to -89 (adequate). It found the next adjacent tower, but competitors find the next three or four.

Although rated speeds are 400/75Mbps, the best we could achieve in the test area was 50/50Mbps. We did test at 4GX reception area, and it was 230/50Mbps. Again my guess is Nokia has saved money by a combined RF antenna for Wi-Fi and 3/4G.

It is suitable for voice (although a little quiet in handsfree). Music is dull and totally lacking bass or treble.

We tried the device with a pair of Sony WH-100XM3 headphones that support aptX. Audio quality was OK, but the volume was on the low side.

We tested the 3.5mm buds, and the sound was, as expected, muffled with poor bass, upper mids and treble.

The battery is small for this class of device, more are now in the 4000-5000mAh range. The battery discharge rate at idle is 400mA so it will drain quite quickly.

The Qualcomm SoC supports QC 4.0, but it made no difference to overall charge times.

It has a metal sub-chassis, polycarbonate frame (called vacuum-metalised polymer composite) and Gorilla Glass 3 front and back. The edges are a little grippy, and the matte glass back reduces fingerprints.

The camera circle makes it a little unstable (rocking) at the edges if using the phone on the desk.

The fingerprint sensor is perfectly placed, fast and reliable. Face Unlock was OK in good light only.

Nokia has gained a reputation for fast updates. With three years of OS support, this is a powerful incentive for purchase.

Android 9 is untouched apart from the PureDisplay. You can read about Android 9 here, and we would expect an update to Android 10 soon.

What is missing (compared to competitors

These are not deal-breakers, but it shows how fast this segment is moving.

A 48MP, tri-camera setup with Zeiss lenses – should be sweet.

Zeiss optics are great for purity and clarity, but they are sadly let down but the older SoC and poor post-processing.

We have tested the IMX586 before on the OPPO Reno Z, so we know what is it capable of and the Nokia 7.2 is not delivering that.

The ultra-wide 8MP lens suffers from a different colour cast and adds an unnecessary softness to the image.

And, in lower light noise levels are unacceptable.

This is not what we should be seeing, and I trust the issues can are curable with a firmware update.

The 20MP sensor bins to 5MP – pretty low res for a selfie but fine for most shots. It can shoot at 20MP in good light so you will benefit from far better details.

It is capable of 4K@30fps, but the colour is off, and quality without stabilisation is jagged and poor. 1080@30fps (not 60fps) is available from both rear lenses, and EIS kicks in. Colours move to saturated, and you lose detail – again, each lens has a different colour cast.

GadgetGuy’s take – Nokia 7.2 is not class-leading

As I reviewed this – desperately trying to find more positives than negatives – I concluded that it was a ‘pretender, not a contender’ for the class. Every 48MP phone within $100, either way, has better specifications, performance and that je ne sais quoi that makes them more exciting.

I love and support Nokia – great build, iconic brand – and generally, most models have been at the top of the class. The Nokia 7.2 is not a bad phone – but it is not what I expect from Nokia.

After finishing this review I read several respected international reviews, and overall we agree, “The Nokia 7.2 looks like a promising phone on paper, and we hoped it would offer the same understated goodness that we remember the 7 Plus (7.1) for. That ended up not being the case.”

I also noted heavy discounting a few days after release in India – its recommended local price for the 64GB version is A$380, but it is selling for $330.

Rating: Given the throttling, inconsistency, and praying that this is solvable by firmware updates, I will give it 4-out-of-5. Solve these issues and perhaps adjust the price to $499, then it deserves much more.