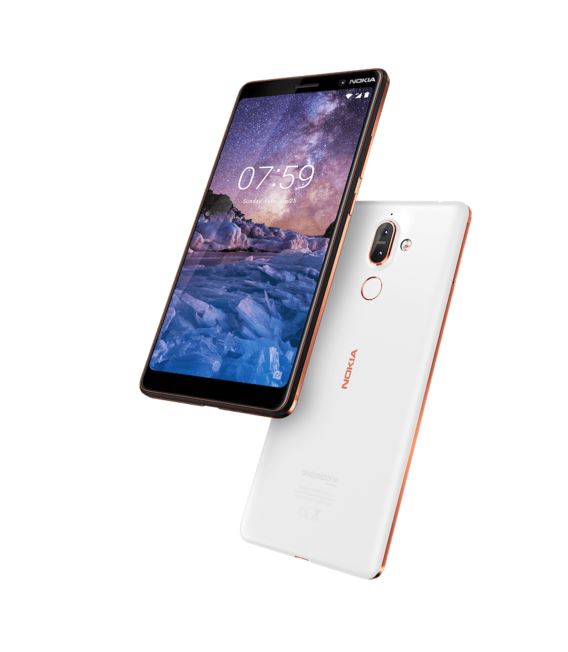 The Nokia 7 Plus is billed as the phone you can rely on. It is a strange, unique selling proposition as you can rely on most phones. Still, we set out to find out why.

The Black and Copper accents and the ceramic feel phone stand out from the crowd. It looks great and distinctive. It has a modern 18:9 screen format, and a dual camera on the back.

The first impression is an edgy looking black and copper very reminiscent of the Huawei Mate 9 Gold Mocha colour I fell for last year. It is thin in the hand courtesy of the 18:9 format. In many respects, this is a good, honest mid-range phone that provides great value for that segment.

It shares the same rear camera as the Nokia 8 Sirocco reviewed here.

Apologies for putting this up front but it is important if you are comparing on specs.

Colours are vibrant but not accurate or adjustable. It has a blueish tint.

It is one of the better IPS LCD screens in sunlight – still washed out but readable.

Camera – good for a mid-range phone

It shares the same rear camera as the much more expensive Nokia 8 Sirocco.

On paper, this should be a great camera. Large 12MP sensor, 1.4µm pixels and a f/1.75 aperture on the standard lens should be amazing in low light. But it is not.

The second lens is a 13MP with 1.0µm pixels and a f/2.6 lens. It provides the 2x optical zoom and bokeh effects (out-of-focus backgrounds).

HDR is automatic. It was off when I felt it needed to be on.

That said the outdoors shots (even on an overcast day) were as good as you will get. Indoors in office lighting, they were great, and in low light, we found too much noise.

Camera summary – two out of three is not bad. Given the Zeiss heritage, we expected a little more. However, this quality of the camera on a mid-range device is very good.

Colours were accurate. The clouds did look like that! It has a narrower field of view than many other cameras. Zoom shots were good and not pixelated.

Colours were accurate with no casts evident. The fur on the left side of the toy dog is slightly blown out from the external windows about 5 metres away.

We found it very hard to get a clear picture. It turns out that there is no Optical Image Stabilisation (OIS) on the standard lens – that in our opinion is a major oversight.

When we used a tripod, we did get an acceptable low-light shot, but it was noisy, lacked fine detail and exaggerated colours.

It has Bothie – the ability to live stream from both the forward and rearward facing cameras.

Panorama – 3000 pixels tall and no stitching lines. Love the ability to pan in any direction – not just left to right.

It will do up to 4K@30fps but loses all EIS so it can be jerky. When using a tripod, it was crystal clear except when panning.

It has Nokia OZO audio with three mics (one dedicated to ANC) can record up to 132dB. Stereo separation and clarity was good.

It performed better than the Nokia 8 Sirocco indicating later firmware.

The single earpiece speaker is not Hi-Fi. It was great for ringer volume and voice (80dB) and achieved 70dB for music. But the speaker is poor at music almost no bass or treble – it’s an upper mid signature for clear voice which it does well.

When paired to a Sony WH-1000XM2 Bluetooth headset (rated as one of the best Bluetooth headphones) it recorded a moderately flat frequency response from 25Hz to nearly 20kHz. But this does not have a Hi-Fi DAC, so it is just going to sound good.

The supplied buds were average. Sounds were very thin, again more mid focused. Nokia has IP55 Active Wireless Earphones (not tested) but without a Hi-Fi DAC I am not sure these would be any better.

Frequency response is 20Hz-20kHz (but that depends on the device). In short use Bluetooth buds – any type.

I would have liked stereo speakers, but few in this price range have these.

GadgetGuy is inundated with smartphone reviews now so we could only use this for a day, instead of a week, of hard testing.

It verges on a two-day phone courtesy of one of the best mid-range SoCs – the Qualcomm 660.

After a hard morning use (4 hours) it still had 72% battery left. Then in normal use, it got through to 4 pm the next day before power management kicked in.

The Qualcomm 660 is the best mid-range chip by far beating all comers from other ARM foundries.

Not surprisingly it worked at the same speeds as OPPO and others using this chip.

During the review, it was updated to Android 8.1 (an incremental update from 8.0) and security patch June 2018. Nokia claims it will provide monthly updates for two years and quarterly updates from the third year.

This means it will get Android 9 at least. I suspect Nokia will try to keep the OS up to the latest version provided the hardware supports it.

Pure Android means all the standard Google apps. The exceptions are

It is a great looking phone from an iconic brand. It is solid, well built and reasonable value for a mid-range device. I like it, and you should put it on your shopping list.

Again, with the warning that parallel imports may not have full Telstra coverage if you can get a Model TA-1055 for under $500 it is a bargain.