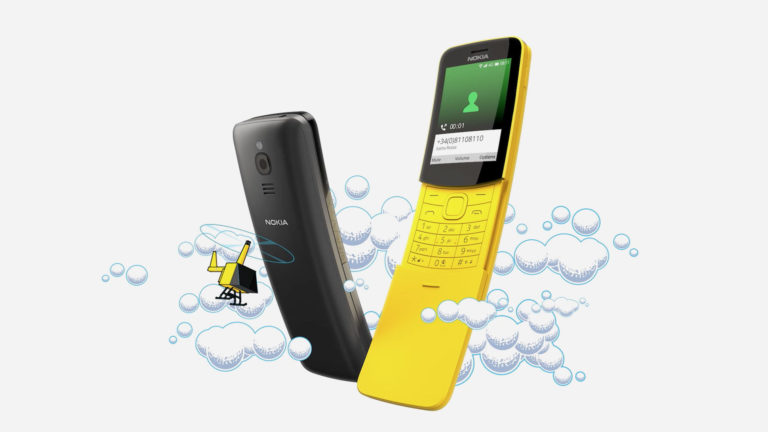 The original Nokia 8110 was circa 9 September 1997. It’s distinctive styling as a slider phone with an internal aerial and some extra functionality, e.g. snake game, made it an instant hit. But that was when we didn’t know what smartphones were to become.

The new Nokia 8110 4G is a modernised version that uses 2/3/4G. GadgetGuy had some fun remembering how to use a keyboard and discovering this unique feature phone.

Do you really care what it’s missing?

OK, so with the Banana phone, you’ll need to live without a few things. There’s no selfie camera, no Android apps and no wireless NFC connection. It is missing ‘Telstra LTE band 28’, meaning limited use outside 4GX areas. It may also need to drop back to 3G inside buildings. This might be an issue for a data-starved smartphone, but not for one that’s mainly for voice calling.

It uses Linux based KaiOS designed for buttons, not touch. KoiOS uses JavaScript, and it seems competent for this purpose. Importantly it supports 4G, over the air updates, some simple HTML5 apps like Twitter, Facebook, YouTube, Google Maps and of course, games. It also has email and messages.

A limited form of Google Assistant (voice control) is available. Google Gmail/contacts or MS Outlook email/contacts will sync. But I do not recommend using it for responding to emails. See ‘buttons’ later.

Google Maps is slow – pedestrian pace. It is not turn-by-turn navigation. The browser will not render most sites well, and the buttons make it hard to type the site URL.

The screen is a fingerprint magnet. It has no ‘Gorilla’ protection – no issue as it is not a touchscreen. The glass is reflective making it hard to see under direct sunlight. And as it does not pretend to support a sRGB colour gamut, there is no point commenting about it further.

My original Nokia muscle memory came back, and it was easy to set up using the 12 alpha/numeric keys. Although if you have complex passwords then expect some anguish – it is slow going.

You switch on the phone or answer a call by pressing a side button or sliding the cover down. Buttons are a little on the small side but are backlit so that you can use them at night.

The ‘home’ button has a cursor square around it (called D-pad). This needs fingernails to use with any precision. Thankfully, there are shortcuts to the most used items.

If you have poor eyesight or shaky fingers go for the Nokia 3310 3G phone  – it will be easier to use.

2MP for video and stills, auto flash, what more could you ask for? Well if you treat it as an emergency camera then its fine for recording important issues like car crashes and neighbours dogs doing their business on your lawn etc.

As a phone its fine. Call quality is as good as you could expect but lack of a volume key could be a concern if you have a hearing impairment.

Bluetooth SBC codec was OK, but we experienced connection issues. The fix was to disable/enable Bluetooth each time. I hope a firmware update fixes that.

The rear mono speaker is quite loud measuring 84dB ring and between 75-80dB for music. But the distortion is too much for music pleasure.

The 1500mAh battery lasts for days if you don’t enable Wi-Fi, Bluetooth or GPS! In part that is because it is primarily a phone and if used that way, it has about 7 hours talk time and 25 days standby.

We did not run video loops and other endurance tests because that is not how you use it. We did run a GPS test, and it used about 10% of the battery in an hour. With Wi-Fi and Bluetooth on it gave about 11 hours.

It will work with other USB chargers, but the battery only charges at 550mA. Charge time is over three hours which is pretty slow.

While polycarbonate is strong, there is no frame, so we are a little concerned at dropability. It is not slippery, but neither is it grippy. The colour is ‘baked’ through, so it should wear well.

Performance is what you expect of a dual-core 1.1GHz processor. It does not support multitasking and has fairly aggressive battery management.

Wi-Fi performance as a hotspot was weak – probably because of the single band, 1×1 antenna. We could barely get 25Mbps from it.

Nokia 8110 is a modern take on a retro phone. Hat’s off to HMG for giving new life to popular oldies.

If you want a stylish retro yellow banana phone, this is it. If you just use it for calls and messages, this is it. For anything else, it’s just a little too slow or convoluted to use buttons.

I would be tempted to go for an entry-level Android touchscreen. Here are a few good places to start:

Which is my polite way of telling you that unless you want buttons and are prepared to pay a premium, the entry-level Android devices are better value, easier to use and offer so much more.

And we won’t rate it because it is in a category of its own. Pros include design, and as a phone, it is fit for purpose.