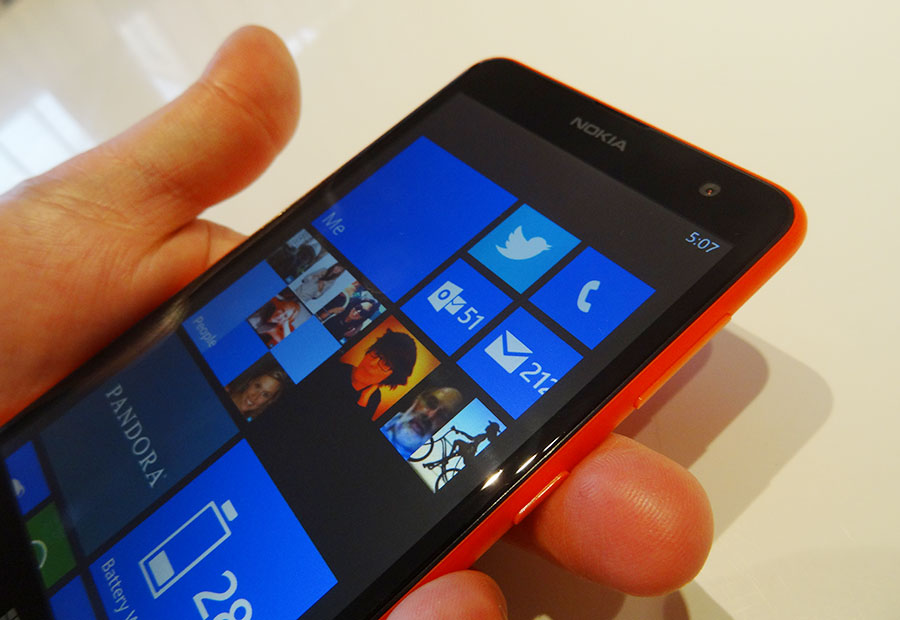 When you’re looking for a new smartphone, the combination of 4G LTE and a big screen normally means a large price tag, but Nokia’s Lumia 625 aims to prove that you can get both without spending big.

Nokia seems to have more phones than anyone else at the moment, throwing its hand in with the seventh device we’ve heard about for the 2013 season.

That device is the Lumia 625, a handset that does a little more than take the idea from the handset above it in ranking and decrease its performance and specs slightly, which is the way it normally seems to go.

In this handset, customers will find a 4.7 inch display capable of showing 800×480 resolution, which will show roughly 199 pixels per inch and is protected by Corning’s Gorilla Glass 2.

Technology inside the Lumia 625 includes a dual-core 1.2GHz processor with Adreno 305 graphics chip, 512MB RAM, and 8GB storage, of which roughly 5GB is available to you, though there is a microSD slot underneath the removable case for upgrading this considerably.

Windows Phone 8 is the operating system used here, capable of handling apps made specifically for Windows Phone, of which there are more becoming available, even if the pace does appear to be slower than market leaders iOS and Android.

As expected, there is a camera on this handset, with a 5 megapixel module on the back accompanied by an LED flash and autofocus, while the front features a VGA camera.

Connections on this handset include support for 3G, 4G LTE, Bluetooth 4.0 with A2DP, WiFi 802.11 b/g/n, GPS, and of course the wired microUSB data and charge port that most devices come with.

The battery practically takes over most of the device, with 2000mAh included, the same amount used in both the Lumia 920 and 925 handsets.

Nokia has made the casing in this phone removable, with the microSD and microSIM slots found underneath.

Few ports or buttons exist here, with the ports seen only in the microUSB below and 3.5mm headset jack up top, while the hard buttons are Nokia’s typical volume rocker, power button, and camera shutter on the right, with soft buttons for back, home, and search on the front beneath the screen.

Nokia’s Lumia 625 is an interesting little device, and one that might surprise you.

Between the devices, there are – not surprising – quite a few similarities. While the speeds of the chip are slightly different, the processor selections are variations on a theme, with Qualcomm’s Snapdragon S4 doing the heavy lifting. Each have 512MB RAM and 8GB storage, and can take more storage by way of a microSD slot.

Both also have 5 megapixel rear cameras and VGA front cameras, and as expected, both support WiFi, Bluetooth, GPS, and run Windows Phone 8.

But then there are the obvious differences, such as screen size, with the 625 boasting a 4.7 inch display, the biggest screen yet to grace a released Lumia-branded Nokia handset.

While the screen is big – and bigger than that of the Lumia 900 and 925 – its resolution is not, displaying the older 800×480 screen resolution, which sits well below the Retina-grade pixel per inch count of 325-330 that Apple uses, showing 199 pixels per inch.

Nokia’s choice of low-end panels does the 625 no favours, and while it’s a large display, it’s not particularly pretty, and when viewing text on the display, there’s an obvious lack of clarity thanks to the low resolution. It’s not unreadable, but this is a screen where you can notice the pixels relatively quickly.

Thankfully, Microsoft’s Windows Phone operating system relies quite heavily on contrast-filled colourful menus, and while there’s a lack of strength in the colours and blacks displayed, it’s still quite easy to get around.

Going from app to app is just as speedy as it was on the 620, hardly surprising given the specs, and while you’ll see the odd bit of lag here and there when switching between software, the 625 generally has no problems with most of what you throw at it.

There’s also a decent feeling in its design, too. While it’s not the lightest smartphone at 159 grams, its case provides a decent amount of grip, while Nokia’s typical button placement on the side works in this larger device.

When it comes to battery performance, the Lumia 625 sticks with a trend typical of Nokia’s Windows phones and delivers excellent battery life.

We push our devices the same way in our reviews, with general use, social networking, speed tests, media playback, phone calls, messaging, and app usage, and in the Lumia 625, we saw two days of usage without any problems. In fact, if you didn’t use your device as often as we did, you could probably even manage a third day, as by the time we decided to call it a day with our model, we still had 30 percent left, which could have easily lasted into the next day.

That’s impressive, and probably stems from the low-end screen requiring less power from the massive 2000mAh battery that it and the Lumia 920/925 share.

The 4G performance is also quite good, landing speeds between 20 and 55Mbps, making it fast enough for most people in reach of a 4G network.

Nokia’s camera in this phone strikes us as decent, but we wouldn’t lean on it too much, as it’s nowhere near the quality of Nokia’s high-end smartphone cameras.

White balance doesn’t appear to be the best, and while images shot in daylight can be soft, low-light shots are almost always affected by these splotches of softness that could never be used as a replacement for your dedicated compact camera.

The omission of Near-Field Communication is also quite surprising, as even the 620 has it, and this is supposed to be a step above that model.

We’re not sure why that feature went walkabout here – maybe Nokia thought no one would use it? – but if you want it, this phone simply won’t provide it.

When 4G devices first started appearing on the scene in 2011, they were expensive. Two years later, 4G LTE is pretty much commonplace and considered the new standard, and devices that come out lacking support for the high-speed networks are often branded as budget, or a bit too late.

Nokia has a few of these itself, and the Lumia 625 is a chance to not only correct that, but also provide a device that offers a big screen without a big price.

From our testing, it certainly succeeds, thanks to high speeds, great battery life, and a decent build quality, but it won’t be perfect for everyone. The screen is very low end, despite that massive size, and the phone does carry a fair amount of heft.

That said, if you’re after a big screen, 4G, and great battery life, and you don’t want to spend over $600, the Lumia 625 is definitely the Lumia for you.