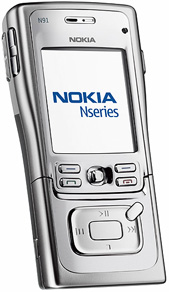 Much like the Sony Ericsson Walkman phones, the Nokia N91 has been built from the ground up to support music. It has dedicated playback controls on the front and on the hands-free kit, a ton of memory inside (8GB in the model we looked at) and a music management interface similar to that found in dedicated MP3 players. It supports WMA DRMÂ  along with most of the major music formats.

In spite of its relatively recent release, the Nokia N91 is almost retro in design and interface. It’s not slick or pretty like the LG Shine or Sony W950i – it?s heavy and hunchbacked, with a bulge at the top to accommodate the integrated camera. We’re not usually inclined to bloviate on aesthetics (beauty being in the eye of the beholder and all), but the Nokia is a not a pretty phone.

Its Symbian OS interface is also decidedly utilitarian, and it’s not exactly bursting at the seems with added applications and games – not out of the box at any rate. The applications it comes with – contacts, calendar, web browser, email and the like are standard fare for a smart phone. We weren’t fans of the keypad buttons (being too small and hard to press), nor of the joystick control in the centre of the phone (which was too difficult to control), but the playback control buttons, while plasticky, were easy enough to use.

Still, the phone has a lot going for it. The expansive memory capacity is its most sellable feature, but the 2 megapixel camera is also of the highest quality.

The music features of the phone are a cut above most other phones that support MP3 playback. For a start the phone supports playlist and music management. You can organise music by artist or album, for example, and shuffle and repeat are also supported. It can handle most music formats – including DRM-encrypted Windows Media tracks. It can also play video files – including MPEG4 and Real VideoÂ – stored on the internal disk or streamed from a website.

You can use the supplied headphones (not recommended) or plug your own headphones in. It has a standard 3.5 mm audio jack, so you should be able to plug any standard headphone into the device. When we tested the supplied headphones, the audio output wasn’t great, but when we plugged a high-quality headset into the phone, we were most impressed with its audio quality. It had plenty of volume, low distortion and plenty of musical depth – a great music player overall.

With the Nokia N91, it’s all about the memory capacity. With 8GB inside, it puts most other phones to shame. It also has decent music playback controls, excellent connectivity options and a fantastic camera built in. It’s a shame that the phone looks like it’s paying us a visit from the 90s, and its interface is not going to win any style awards. If you’re someone who values function over form, however, the N91 is an excellent choice for a combo phone/MP3 player, especially with its capacity to store some 1,600 songs (at 5MB a piece).