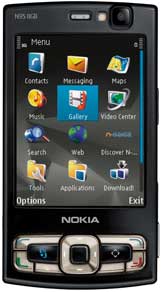 When Nokia launched the first iteration of the N95 just over a year ago, phone fans got excited. And rightfully so, because what Nokia dubbed the “multimedia computer” lived up to its reputation as the most feature-packed handset in existence. Now Nokia is re-arming its flagship handset to compete with the a growing legion of threats to its crown – but will the new additions be enough to tackle the new kids on the block in the high-end mobile market?

It would be harder to find a handset with more features than the N95 8GB. For those users familiar with the original N95, the 8GB model brings a larger screen, 8GB of internal memory (at the expense of a microSD slot), and overall a much more solid feel. Annoying niggles such as the lens cap on the camera have been removed from the new version.

The N95 8GB’s 5 megapixel camera is one of the best in any handset available. The video recording is also exceptional, and has now been implemented into downloadable Nokia applications like SportsTracker, which is also integrated with the in-built GPS.

GPS and the Maps application are fantastic, thanks to Nokia’s acquisition of NavTeq maps. The application (now with assisted GPS for faster locating) again sets the standard for built-in navigation. The only complaint is that tech-adverse users will not only have to download their own maps through a PC-based program, but will also have to update Nokia’s maps software on the device. The software gets better with every update- but updating is annoying, and not particularly easy for the average user.

It’s a shame Nokia didn’t do more to sharpen up menu loading times. The N95 8GB still suffers from a split-second delay in menu navigation which is consistently annoying for a device of this quality.

The phone’s myriad of other features are easy to use – and particularly useful. 8GB of storage will house thousands of MP3 tracks and will replace your old iPod mini or nano. The screen is big and clear enough for watching shows and short movies on too. Nokia’s N-Gage gaming application works well on the N95 8GB and a growing list of developers will make this device a gamers delight. Other features like a PDF reader and Office reader are handy and functional.

Nokia’s web browser isn’t the quickest, but it does a great job of navigating everyday web pages – particularly over Wi-Fi. Also great for checking pages on the go using 3G.

Other phones in this price range don’t come close in terms of user-friendliness or features. Competitors are likely to be more fashionable – the N95 8GB is still on the chunky side, but it’s got a lot under the hood. Yes, the pricetag is high, but quite reasonable for the features and the storage offered.

A great update to what remains one of the best phones on the market. 8GB of storage is good, but not enough to compete with the iPhone 3G’s 16GB iteration. This phone does pretty much everything – which is great if you need a phone that does pretty much everything. But faced with the onslaught of the Apple iPhone, the crown of the Nokia N95 8GB is already under a very real threat.