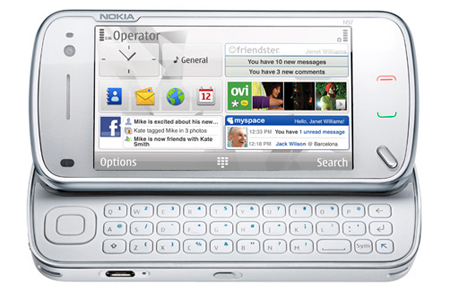 Nokia’s always kept the top ‘N’ spot for its brightest new star: we’ve had the N95, then the N96, and now the long awaited N97. But a lot has changed since the N95 launched to great fanfare in 2007 – Apple launched the iPhone, BlackBerry got Bold, and LG, HTC and Samsung started making smarter phones. So the N97 is playing in a whole new ballgame compared to its N-series siblings – can Nokia’s new star shine as bright as its rivals?

Just like the N96 and N95 before it, the N97 is Nokia’s real heavyweight mobile when it comes to features. After the excellent 5800 Xpress Music, the N97 is only Nokia’s second touchscreen phone, keeping the familiar Nokia menu experience but allowing you to click through menus with the tap of a finger. Sadly, this is where the N97’s first faults appear: unlike the smooth touch interface of the 5800 or rivals like the iPhone, the N97 gives jerky responses to finger taps. Also, slight or even long delays after tapping an icon are frequent, leaving you wondering if you hit the screen correctly or not.

But the N97 doesn’t restrict you to the touchscreen for typing – turning the phone to landscape mode allows you to slide up the screen, unveiling a full QWERTY keyboard underneath. Now the keyboard is great, giving a satisfying ‘click’ when you hit the well-spaced keys which makes typing messages or even longer emails a simple task, much better than any on-screen keyboard has delivered.

The N97 also boasts a new design homescreen – you can add your own selection of widgets, meaning quick access to things like email, Facebook, weather information, stocks, a news ticker, and a whole range of other mini-apps. The N97 is also the first local release to access the new Ovi Store – think of it like Nokia’s equivalent to the Apple App Store or Google Android Market. It allows you to access (from the phone itself or from your PC) a wealth of apps for Nokia’s Symbian operating system, meaning games, mobile office, wallpapers and ringtones – it doesn’t quite have the support of Apple or Android yet but it’s a welcome addition to Nokia’s lineup. Through Ovi you can also unlock turn-by-turn navigation on Nokia’s excellent maps program, or access Nokia’s growing music catalogue, like iTunes.

While many smartphones have in-built GPS, the N97 stands out from the crowd. Nokia has really improved its own maps program so a GPS lock is almost instant, and you also have the choice of using Google Maps if you prefer it to Nokia’s Navteq maps. Turn-by-turn navigation is available for a subscription fee, but is another feature which puts the N97 ahead of the crowd.

The N97’s camera weighs in at 5MP – hardly top of the range in terms of megapixels, but Nokia’s combination of software and optics puts this camera ahead of its peers. In fact, this 5MP Nokia camera feels more solid and gives sharper pictures than some rival camera phones with more megapixels – and with extra features like geotagging and 30fps VGA video recording, it will do the job nicely for day to day pictures while not quite replacing your stand-alone camera.

Unfortunately the N97 is really let down by its dated operating system which makes many essential features clunky to operate. The web browser is difficult to use and renders some patchy web pages – a real let-down when rival handsets have some slick browsers. The software also means organising emails is an ugly exercise – with a fantastic full QWERTY keyboard emailing should be a breeze, but the software only offers an inbox which resembles a standard SMS-style experience. In dire need of an overhaul.

The N97 is exactly the same price as the new Apple iPhone 3GS, which means it’s also in the same league as phones like the BlackBerry Bold, LG Renoir, and HTC Magic, Snap or Diamond2. While it can compete on paper thanks to its big touchscreen, ample storage and processing power, the user experience simply isn’t as good as its rivals. The iPhone offers a better multimedia experience with a superior web browser, while LG’s Renoir and Viewty offer equally impressive cameras.

An otherwise great handset hampered by a shonky operating system. The N97 wins points for its impressive list of features like 5MP camera, A-GPS with maps and a big 32GB of memory (expandable up to 48GB). But it loses points for its poorly implemented touchscreen, buggy and hard-to-use software, and a web/email experience which feels about two years too old. Overall the N97 manages to keep up with its competitors, but it fails to outshine them.

Nokia have just released a software update, version 2.0 for the Nokia N97.