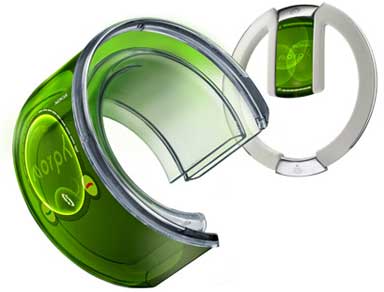 Launched alongside The Museum of Modern Art “Design and The Elastic Mind” exhibition, the Morph concept device is a bridge between highly advanced technologies and their potential benefits to end-users. This device concept showcases some revolutionary leaps being explored by Nokia Research Center (NRC) in collaboration with the Cambridge Nanoscience Centre (United Kingdom) – nanoscale technologies that will potentially create a world of radically different devices that open up an entirely new spectrum of possibilities.

In addition to the advances above, the integrated electronics shown in the Morph concept could cost less and include more functionality in a much smaller space, even as interfaces are simplified and usability is enhanced. All of these new capabilities will unleash new applications and services that will allow us to communicate and interact in unprecedented ways.

Elements of Morph might be available to integrate into handheld devices within 7 years, though initially only at the high-end. However, nanotechnology may one day lead to low cost manufacturing solutions, and offers the possibility of integrating complex functionality at a low price.