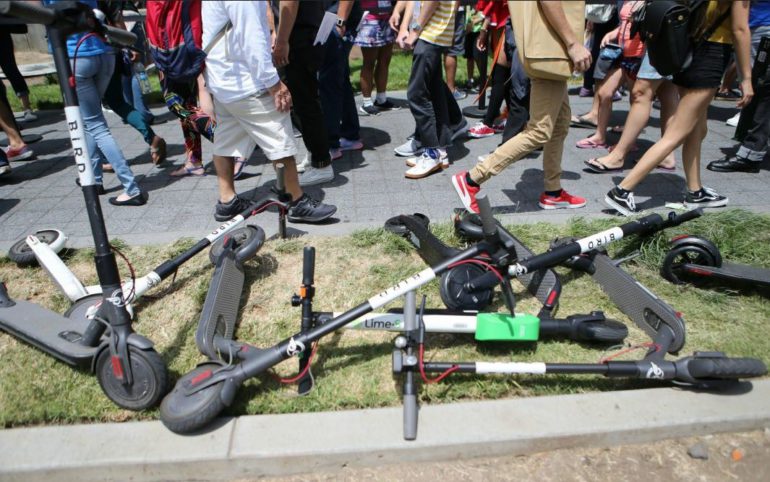 NSW Transport Minister Andrew Constance says that other State trials of e-scooters have been a disaster. As a result, NSW says no to e-scooters. A move that is unlikely to change, at least under the current government.

Andrew Constance is one of the more sensible, pensive, NSW State Government Liberal MPs. He knows more about e-scooters than most as a procession of lobbyists from Lime, Beam and Neuron have tried to twist his arm and wave big-dollar carrots at the State Government and Sydney City Council to implement trials. Constance said: “People getting killed, e-scooters left up trees, e-scooters littering parks and footpaths, people falling over them. The point is that I am not entertaining this.”

Pedestrian Council of Australia chairman Harold Scruby is leading the push for reforms and argued governments needed to “stop pretending e-scooters are safe”. He want to see scooters banned from footpaths and mandatory licenses and insurance policies for riders. So when NSW says no to e-scooters – it means it

What are the rules?

Let’s clarify what the rules mean. You can only use an e-scooter on private property, and only where it is not a danger to anyone else. As there is no public liability coverage, accidents with people or property are not covered. NSW legislation is here.

This means you cannot use e-scooters on bike paths, footpaths, malls, roads, or public places like car parks and parks. But ‘bloody’ e-scooter salespeople lie outright, adding, “It is a kind of [a] grey area, [police] won’t pull you over unless you’re being rash [sic].”

If you are hit by one of those scooters, the medical bills come out of your own pocket. You’re better off being hit by a car”

Well, police do pull you over! It is a well-publicised issue, especially if ridden on roads or malls. And the fines can be considerable as these devices are unregistered motorised vehicles and attract penalties as such.

Should e-scooters be legal?

We published two articles based on reviewing all the relevant State and Territory Road regulations. If you want to know the real state of the law, check out these articles:

We were subject to a tsunami of vitriol (venom) from e-scooter lobbyists and those with vested interests. Our response to these parties is regardless of paid and strictly limited trials; most State Road Laws are yet to be amended to make e-Scooters and other personal powered transport legal. The trials are in specific areas and work under very tight rules, including speed limiting and scooters will not work outside the approved GPS enforced area.

But there are cowboys (sorry, cowpeople) stretching the truth and selling e-scooters regardless of state laws. Many are non-compliant in terms of power ratings and capable of speeds far higher than is safe anywhere. Our opinion on the benefits or otherwise of e-scooters is immaterial. When and if they are legal, we look forward to reviewing them.

Under Australian Consumer Law, businesses must report if a user has sustained an injury as a result of using their products. The ACCC stated that Lime, a global e-scooter and personal mobility provider, did not make such a report on ‘at least 50 occasions’ relating to injuries sustained while riding the second-generation scooters. Lime suspended its e-scooter operations in Australia in March 2020 due to the COVID-19 pandemic and the public health measures imposed by governments. Lime acknowledges that it did not meet its reporting obligations. “We are a young company and while we don’t always get it right, we learn fast”.