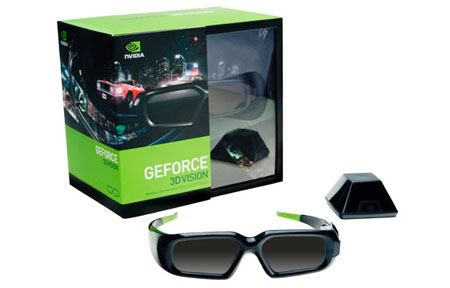 Unless you’ve been living under a two-dimensional rock, you’ll know that 3D is the Next Big Thing in home entertainment. Hollywood studios are releasing more and more movies in 3D for the cinema and these titles will soon be available to enjoy in the living room using one of the new 3D television sets – and a pair of glasses – being developed by major flat panel TV makers.

NVidia’s 3D Vision glasses promise to up the reality, thrills and overall level of immersion you’ll experience from PC games – but you’re going to need some extra equipment to make it happen.

To make use of these NVidia 3D goggles, you’re going to need a computer with a recent GeForce card and a display capable of running 3D. For the card, you’ll want either an 8800GT, 9600GT or any of the current GTS200 cards. It’s assumed that the technology in these cards will be in any future cards.

To realise the sense of depth NVidia goggles can bring to conventional 2D games, you need to upgrade your existing monitor to one that supports 3D – either a projector or monitor that specifically says it supports 3D and runs at 120Hz. At least one label – either “3D Ready” or “GeForce 3D Vision Ready” – should be present on the box.

Once you’ve got the video card installed and the display nailed, you just load the drivers using the installation disc or a download from NVidia’s website. Setup is painless from here: you plug in the small pyramid-shaped wireless receiver via USB to your computer and charge the GeForce 3D glasses through a different USB port. The wireless receiver uses infrared so once your glasses are charged, turn them on, pop on a game, and prepare to be immersed.

Depending on the game, GeForce 3D goggles can deliver excellent results.

We tested on a Viewsonic PJD6211 projector, a device set up to take inputs over a VGA connection and run them at 1024 x 768 at 120Hz. Our card was a midrange GeForce GTS250, a recent card albeit one that’s not overly powerful.

Results were great with games such as the brilliant modern classic Half-Life 2. We sat engrossed in the life-like gaming, letting our hands do the work on the mouse and keyboard while being blown away by how the 3D glasses transformed the game.

The pyramid-shape 3D base station has a depth controller on the rear, which you can dial up and down to change the level of depth your brain gets to experience. Dial it up all the way and you’re thrust into the gaming world, images becoming more like virtual worlds you have become a part of.

It’s so good it can be unnerving at times.

For our second test, we plugged in the one-of-a-kind Mirror’s Edge, a title built around the concept of parkour. Parkour sees you running, jumping, climbing walls, and moving around urban environments in the fastest way possible. We imagined this to be ideal material for 3D treatment, but it revealed, instead, the GeForce 3D Vision system’s biggest failing.

Mirror’s Edge, for instance, contains a fair amount of graphics that don’t quite blend, and as we pushed the depth control to its limits on the back of the infrared receiver, the images didn’t quite connect. Our eyes did the best to make things gel, but the result was less than convincing and headache inducing.

So while the GeForce 3D Vision worked brilliantly for some games, it was not so stellar with others. What’s more, it didn’t work at all with some titles, with the rub being that you won’t know which ones these until you try them. NVidia do have a guide suggesting what the experience is like – listing games as “Good,” “Excellent,” and so on – but this is far from accurate.

And then there’s the problem of the depth.

To realise true 3D effects – to dodge bullets as they emerge from the screen, or pull back from the edge of a high building – games need to have been created in 3D. As good as the NVidia system can be, it can’t replicate these effects from material that is natively two-dimensional.

The NVidia GeForce 3D Vision glasses help your eyes put together the two sets of images.

One pair of NVidia GeForce 3D goggles and a base station costs around $320, with a 3D display adding around $600. A suitable video card is also an additional yet required expense and, if you want to play with a friend, you’ll need another set of goggles. These are not available for individual sale in Australia (you can buy them NVidia in the US), so you have to buy them along with a second base station – which you can leave in the packaging as a computer requires only one base station to operate the system.

Gearing up for 3D PC gaming, then, is a costly exercise that offers only uncertain results for your collection of PC games.

If you have to have 3D right now – this exact moment – then the GeForce 3D system is really the only game in town. If you’re prepared to wait, the technology is sure to improve and become more wallet friendly.

Overall
Features
Value for money
Performance
Ease of Use
Reader Rating0 Votes
Ups the thrills and reality level on many games; Works with most PC-based games; Easy to set up and install
Requires extra hardware; Buggy; Can cause headaches if used for too long; Doesn’t benefit all gaming material
3.2