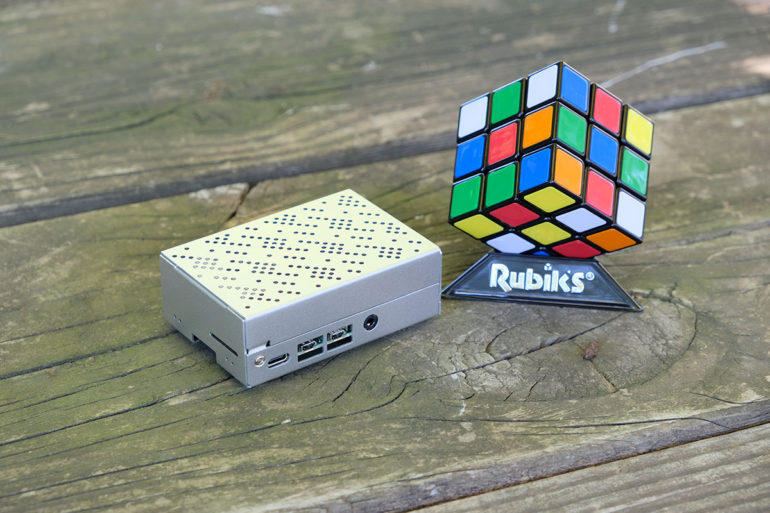 You have to love the name. The OKdo Raspberry Pi 4 4GB Starter Kit is an easy way into the latest generation of Raspberry Pi computing. Since the start, you’ve been able to put together a Raspberry Pi from a board and separate components, buying and installing it into a case if such was your need. But that prospect can be quite daunting.

The OKdo Rapberry Pi 4 4GB Starter Kit makes it easy. Yes, you still have to assemble the thing. But everything you need is provided, along with very easy step-by-step instructions. In about 20 minutes, you’ll have a working computer. All you need add is a keyboard, mouse and monitor.

A Raspberry Pi is a tiny computer running on a small circuit board. The board measures just 85mm long by 56mm wide. In the Raspberry Pi 4, the main processor is a Broadcom BCM2711 quad-core Cortex-A72 (ARM v8) 64-bit system-on-a-chip running at 1.5GHz. The review unit was fitted with 4GB of RAM. An 8GM model is also available.

Primary storage is a 32GB microSD card – one is included in the package – inserted into a dedicated slot. This comes with the Raspbian OS, apparently now called the Raspberry Pi OS. Either way, it is a version of the Debian Linux distribution. But you can optionally install several other operating systems instead.

The Raspberry Pi was original developed in Britain as a low-cost device for teaching computer science, so it comes with a bunch of beginner-orientated programming features, including development environments for Python, Scratch and Java. But it has since taken off due to its usefulness in a wide range of functions, including control systems. That’s thanks to the 40-pin General-Purpose Input/Output interface. All manner of devices are available for this, from cameras to gadget controllers. Expansion devices are called HATs, for Hardware Attached on Top.

Putting the OKdo Raspberry Pi 4 4GB Starter Kit together really was simple. All the parts are packed into a box of modest size. Opening it up revealed a heavily perforated aluminium case (which turned out to be holding all the necessary screws, the cooling fan and a small screwdriver). Next to that was the Raspberry Pi 4 board itself, contained in its own cardboard box. I guess that’s how it would come if purchased outside a kit.

Underneath those, another layer held the power cable and adaptor, the microSD card and a card reader, three stick-on heatsinks and two HDMI cables. The Pi has two Micro HDMI outputs because it can drive two monitors. The power cable has a USB Type-C plug at the Pi end, and a switch on the line, which is your hard power switch.

To put it all together, it’s best to have another computer at your side showing the assembly page referenced in the kit. This shows things step by very clear step. You peel off the protective layer on each of the three heatsinks then attach them to the matching chips. Then you attach the board to the bottom of the case with four screws. Attach the fan and plug it into two of the pins on the GPIO. Attach the lid of the case with just one screw and you’re done.

Then it’s a matter of connecting to monitor, keyboard and mouse, placing the microSD card in the slot and firing up the unit. Shortly you’ll have instructions on the screen. At one point they indicate that they’re going to overwrite the card. Just let it do so.

The unit had to reformat the card, install some updates, but after half an hour it was ready, with more than 25GB available on the card for storage and use.

Now, here’s how I generally write a review. First, on my Windows computer I open up a Microsoft Word template with suitable styles specified so that they’ll translate conveniently into decent looking block types in gadgetguy.com.au’s  WordPress CMS (Content Management System). But not this one. Oh, sure, I started it in Word with the template, but then I copied the Word document to my NAS and from there to the desktop of this Raspberry Pi. A double click, and now I’m editing it on the Pi. I can tell you, this little computer is perfectly workable for such tasks.

Now, we’re not talking a rip-roaring Core-i7 processor here. Starting up LibreOffice Writer – the Word Equivalent, for example, took twenty-three seconds the first time. I’m used to four or five on my Windows machine. No doubt part of that is due to the microSD card being much slower than my computer’s SSD. Closing Writer and then restarting it got it going in eight seconds. Perhaps some was left in memory.

Starting up the unit itself took the better part of 80 seconds before the screen completed placing all its icons up. I suspect background startup processes were continuing for quite a while afterwards.

So, yes, a little patience is in order.

I found the Raspberry Pi OS kind of restrictive. It looks like Windows (albeit, with the main menu bar at the top of the screen). I spent a fair bit of time googling how to do things, and certain really obvious things can’t be easily done. For example, the screen timeout apparently can only be changed with a command in Terminal, the command line interface. And to make it stick, you have to put that command in the configuration file.

Likewise, to automatically mount a network drive on boot involves editing another configuration file. Be prepared to roll up your sleeves.

But, hey, my first word processor was on an Amstrad CPC 6128 running, in CP/M, a copy of Wordstar obtained, shall we say, through irregular means. Since I didn’t have the proper installation disks, I had to write a printer routine in Pascal. Heck, I even wrote a spell checker and a word counter for my files, since Wordstar didn’t have such a thing. The OKdo Raspberry Pi 4 4GB Starter Kit is a regular delight to use by such standards.

Since there’s not much storage on the microSD card,  you may want to add an external USB drive. I added the 1TB Silicon Power SSD to give it ample space.

What should I do with it?

So I now have a nifty working mini-computer. What to do with it? I’m kind of torn. For one thing, I’m woefully ill-educated on Linux, and the Raspbian OS is simply a cut-down version of Linux. So it could make a nice little learning platform. (But I already have more computers than I can fit monitors for onto my desk!)

I don’t have any real-world interface problems that need solving at the moment, so that’s out.

So, the alternative is to turn the unit into a dedicated music player/digital audio streamer, using something like Volumio. I could even consider rebuilding it with a touchscreen, as demonstrated here with an earlier Raspberry Pi.

Or I could simply plug in a decent DAC – I plugged in the Topping E30 DAC (LINK) and it worked immediately without any need for a driver to be installed.

And at a very reasonable price. There is no way that I was using this unit to anywhere near its potential. Knowing Linux commands would be a good start. But it would also be a great way to learn Linux … and how to program. Especially if you have kids and want them to be able to do more with a computer than use existing apps.