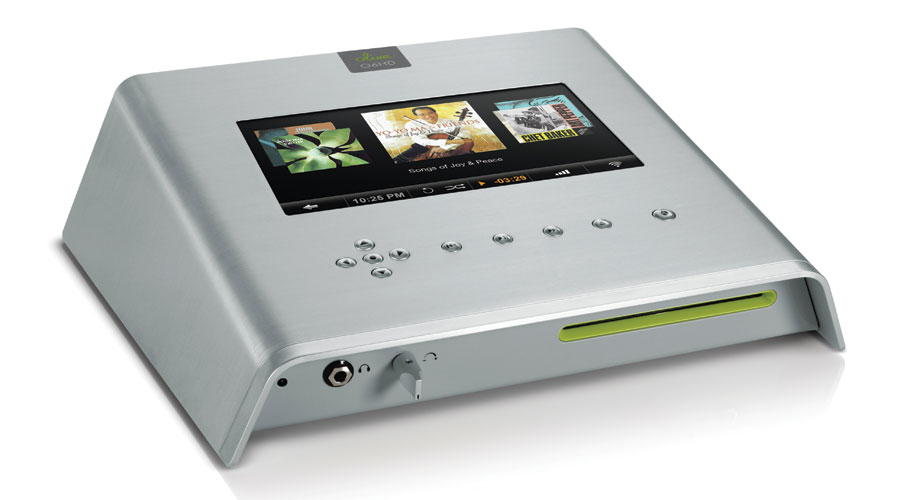 The Olive 06HD is a music server. What, you may ask, is that?

It is a device that at its core can hold lots of music and make it available over a computer network. But this unit is a great deal more than that.

This is a large and heavy unit upon which no expense – obviously – has been spared. It is chock-a-block full of audiophile components, including high-end Burr-Brown digital to analog converters, re-clocking to eliminate jitter from digital audio, and the best inputs and outputs available.

It also has a two terabyte hard disk drive on which to store all your music, tucked into eight layers of sound dampening to make sure no unwanted noise is emitted.

The unit has a CD slot on the front from which it may rip audio, plus both wired and wireless networking built in. It will talk to your computer network using either, both to supply music to other devices and to be further fed with new fodder for its hard disk. Oh, and to talk to the internet.

Remember, the unit has two terabytes on tap. This is enough for 6000 CDs with the lossless FLAC compression system ensuring identical quality to the original. If quantity is more your thing than quality (although quite why you’d then be purchasing this isn’t clear), then you could go MP3 or AAC at 128kbps, and bump this up to perhaps 30,000 CDs!

You can plug a headphone into the front of the unit (and this incorporates a proper headphone amplifier), but generally you will use either a direct analog or digital audio connection for output to a sound system, or use it to feed your network-based audio system.

Obviously, unless you have some pretty esoteric audio equipment, the best sound will come from using the unit’s own analog outputs, given the high quality of its components.

Control is via a set of keys on the front/top of the unit, the remote control, the 255mm LCD touch screen panel on the surface or, to a more limited extent, the web interface.

There are a number of ways of feeding music to the hard disk. One is by having the unit rip audio CDs. It automatically consults its built-in CD database (which seems pretty extensive, given some of the obscure CDs that it recognised). Assuming you have it running with your internet-enabled network, it drags in album art from an external database.

Another way is to open up a window into the unit on a computer on the same network and drag in folders full of music. The unit indexes these and places them elsewhere within its innards, from which they can be played.

All this worked beautifully well. Where possible you should choose the FLAC codec (Free Lossless Audio Coding), which provides perfect reproduction of the original digital audio, but consumes roughly half the space.

Ripping CDs and preparing them for playback was very simple: insert CD, wait a few seconds while the unit identifies it by name and artist, then press a button to start the transfer. Five or six minutes later then unit pushes the disc back out, job done. The encoding is a bit slower than the disc reading. Olive suggests that you don’t get more than about 30 discs ahead of where the encoding has reached, for fear of excessive processing slowing things down too much.

As for playback, the sound quality (via its own analog outputs) was excellent. Basically, as good as stereo can get. And don’t forget, it supports the higher resolution audio files that you can find on the internet. It will happily play 192kHz, 24-bit stereo material.

The unit was perfectly happy to do a couple of things at once. For example, as I write this paragraph I am undergoing an assault from two audio systems simultaneously. One – directly fed by the unit’s analog audio outputs – is playing some techno from Triple J via Internet radio. The other is playing Primus’ ‘Groundhog’s Day’ via the network from the unit’s hard disk.

Incidentally, if you happen to lose your original CD, the unit will burn a CD from its contents for you.

There was a small bug relating to the display of Artists in the web and DLNA (Digital Living Network Alliance) interfaces which, no doubt, will be readily addressed in a future firmware update. And it would be nice if the progress indicator when you’re ripping would give a finer grained demonstration of progress, rather than showing 33, 66 and 100 percent.

But those are mere trivia. You pay a large stack of money for the Olive 06HD, but what you’d paying for is superior sound and sensible design and marked flexibility.