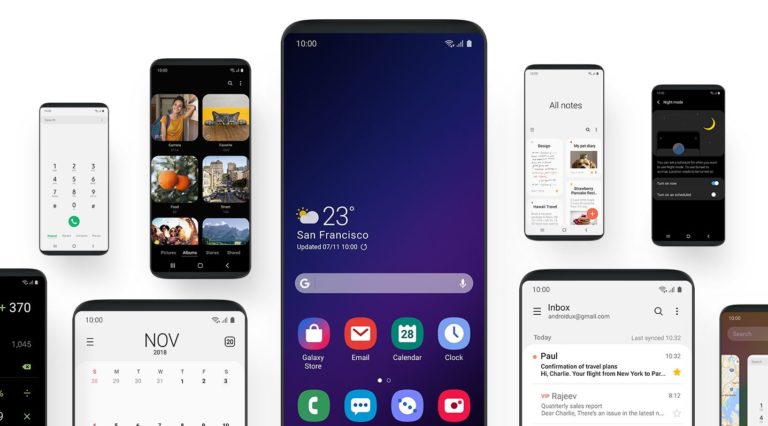 Samsung UI (user interfaces) has undergone many variations over the years. One UI is its latest to bring it closer to an Android experience.

I don’t mind Samsung UIs. I have been using Touch Wiz, later Grace, and now Samsung Experience since the Note5. Overall, they work as promised. One UI, however, looks really good.

It addresses the movement to pure Android that is gaining momentum. Savvy buyers are demanding regular monthly security updates and future operating system updates. This creates a major headache for Android OEMs.

Samsung’s aim with One UI (website here) is to strip away any unnecessary or redundant features coming much closer to Android Pie. The catch 22 is that only devices that can run Android Pie will get it. That means the Galaxy S9/Plus and Note9 are first. It also means that phones locked to a carrier won’t get it.

One UI is more visual

One UI changes how you view your phone. Use Night Mode for a comfortable experience in the dark. And with clear and intuitive visuals, you don’t have to give it a second thought.

Screens are simpler and less cluttered. The new screens show relevant information with each tap, so you only the essentials, one at a time.

One UI is on a beta testing program for China, France, Germany, India, Poland, South Korea, Spain, UK, and the USA. Aussies will have to wait until early 2019.

GadgetGuy’s take: One UI is more than a fresh coat of paint

Samsung has been at a disadvantage by the Telco distribution of so many of its handsets. Updates are always slow, and that is because Telco’s often heavily customise the UI and lock it to them.

Samsung has indicated that the Galaxy S8/Plus and Note8 should get One UI but not older models.