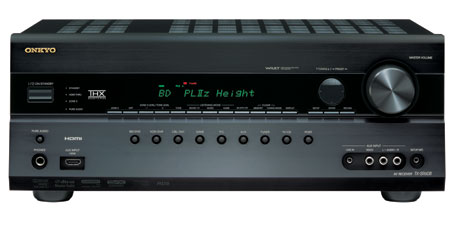 In recent years Onkyo has been one of the quickest to introduce new home theatre receiver features to the Australian market. It was very early with decoding high resolution audio formats from Blu-ray, and the first with the new Dolby Pro Logic IIz ‘front height’ channels.

And now the Onkyo TX-SR608 home theatre receiver arrives with the latest feature of all: support for 3D video!

In general, home theatre receivers supporting HDMI version 1.3 won’t necessarily pass through 3DTV signals. The new HDMI version 1.4 provides support for this (although, confusingly, it is up to the equipment suppliers to decide to implement it). The TX-SR608 has six HDMI 1.4 inputs!

You also get a few analog video and audio inputs, including a useful 3.5mm socket on the front for convenient use with an MP3 player. The unit also has an interface for Onkyo’s iPod dock. Missing is S-Video. If you have a source device, such as a VCR, from which this is the best video standard, it’s probably time to retire it.

The receiver has facilities to convert analog video to digital, so you only need a single HDMI cable to your TV. It can also scale up all inputs to 1080p24 and uses high quality Faroudja DCDi processing for the purpose.

It has a Zone 2 capability and you can apply two of the unit’s seven 100 watt amplifiers to drive the second zone if you want. Or you can use them to drive the ‘height’ speakers for Dolby Pro Logic IIz sound, if you want, or to bi-amplify the front stereo loudspeakers.

With the new things to cover, I’m not going to talk about the audio performance of this receiver, except to note that it was up to Onkyo’s usual high standards, and that the Audyssey auto setup feature worked nicely, as always.

Now let’s talk new features. Obviously it was important to see if the receiver would pass through 3DTV. So I plugged in the Samsung 3D Blu-ray player and TV and started them up. When I put on a 3D Blu-ray disc, the player popped up a message asking whether I wanted to see the content in 3D or 2D, something it didn’t ask when plugged directly into the TV. I chose 3D, and all worked perfectly.

The advantage of this is that the receiver can extract high resolution audio from the HDMI cable, then allow the 3D video to go on to the TV. Other receivers won’t, so to watch 3D with them you may need to connect the Blu-ray player directly to the TV and make do with lesser audio provided over a regular digital audio connection from the player.

The 3D picture was identical whether viewed with a direct connection from the player to the TV, or via the Onkyo receiver.

The receiver itself is hobbled just a little with 3D, because it could pop up messages (eg. if you press the ‘Display’ key on the remote) over 2D video, but wouldn’t do this with 3D.

Another feature that can be implemented with HDMI 1.4 is ‘Return Audio’. That is, the HDMI cable that passes video from your receiver to the TV can also feed audio back from the TV to the receiver. So where you’re watching TV using the TV’s own internal digital TV tuner, you can have the sound delivered by your real sound system rather than the TV’s internal speakers.

Of course, you could always do that using an analog audio connection from the TV outputs to the receiver, or using a digital audio connection the same way. But with this system, the cable that you have in place anyway to take video to the TV does the job for you.

The Onkyo TX-SR608 receiver implements that as well, as does the Samsung TV. Once plugged in that way, with the appropriate setting switched on in the receiver’s setup menu, all I had to do was select ‘TV’ as the input, and the TV station’s sound started coming out of the receiver’s loudspeakers instead of the TV’s.

This receiver truly does provide a one-cable connection to a (HDMI 1.4) TV.

Perhaps the most impressive thing about this receiver is that all these new features simply worked without any hint of drama. I plugged in everything and worked through the setup. And immediately all worked perfectly.

The Onkyo TX-ST608 receiver offers very good home theatre receiver performance, but adds all the cutting-edge features without any of the ‘bleeding-edge’ aspects that usually accompany them.