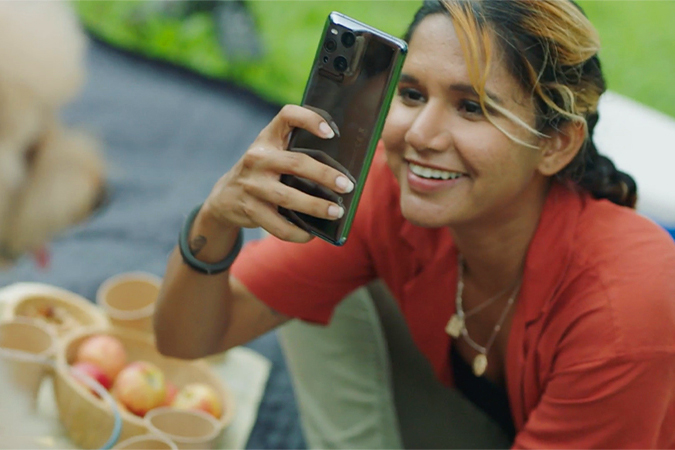 Smartphone cameras have traditionally used DSLR (digital single-lens-reflex) technology. Only where a camera has a relatively large body and thinness is not an issue, this tech has literally shrunk down to fit inside a small light smartphone body and beefed up with A1 computational photography.

Result? It is impossible to compete with DSLR on image quality and optics despite some brands so-called collaboration with the likes of Zeiss, Lecia and Sony. It needs new thinking.

Smartphone sensors traditionally use RGB (reg, green, blue) photoreceptor pixels. Some more sophisticated ones have an extra green or yellow pixel, but this requires a lot of AI to harness any benefit.

Result? 60% more light capture and up to 35% noise reduction in low-light delivers much clearer and brighter images than RGB sensors.

When? It will appear in flagship smartphones from Q4, 2021.

OPPO pioneered a periscope lens similar to the principle of a submarine periscope. Still, until now, the maximum was about 5x optical, 30x digital and 100x hybrid zoom – largely unusable over about 30x, but it gives some brands ‘bragging’ rights.

Result? Smooth transition throughout the continuous optical zoom range with image quality comparable to that of a DSLR. It avoids common problems like jumping, white balance inaccuracy, or colour bias that conventional multi-camera zoom systems may experience.

Result? This allows a maximum stabilisation angle of ±3°, or 3X more than traditional mobile, while the sensor can also shift with a precision of 2μm. OPPO’s AI algorithm technology can help significantly improve stability, clarity, and colour, increasing the vibration compensation performance by up to 65%.

GadgetGuy covered this fully here, but in essence, OPPO’s approach allows for high definition 400ppi screens even over the entire screen instead of other techniques that reduce the pixel count over the USC to as low as 100ppi.

Result? The chromaticity and brightness of the entire screen are more precisely controlled, with an improved screen lifespan of up to 50%.

AI allows even the worst photographer to point and shoot and get a good shot in most conditions. AI is essentially computational photography where the algorithms that adjust the image come from machine learning of millions of different pictures to ‘know’ what an object is and what it should look like.

To put it simply, if the sky is blue and a person’s skin tone is Caucasian, then the final image is adjusted accordingly. There is much more to it, but it accounts for the OPPO style – slightly more vivid, saturated images that we all love. Of course, you can control the level of AI and even shoot at the highest MP without AI.

When? Ongoing via ColorOS updates

Moving forward, OPPO continues to focus on implementing its imaging technologies and further strengthening its cooperation with industry partners to provide users with an even better imaging experience.

Nearly 80% of buyers put camera quality at #1 or #2 reasons to buy a particular smartphone. Battery life/recharge time comes in at #3. The world has a different opinion to the smartphone that started life as a mobile phone with benefits. It is now a camera that can make phone calls and use apps.

I have been privileged to have access to the top quality cameraphones – Samsung Galaxy S series; Huawei (when it could use Google Android and apps); Sony (inventor of the Exmor sensor); earlier Nokia Zeiss collaborations (that were well ahead of their time); and of course OPPO’s Find and Reno series.

Each brand does a great job and has a unique style – their AI’s are the main difference. Now OPPO has further widened the gap by new hardware innovations that, yes, will be on the 2022 flagships but will gradually make their way down the range – perhaps as early as 2023!

Congrats to OPPO for investing in camera tech. No, if you could just squeeze a coffee maker into the Find X4, that would be amazing.

You can read more GadgetGuy OPPO news and review here or visit the OPPO Newsroom here.