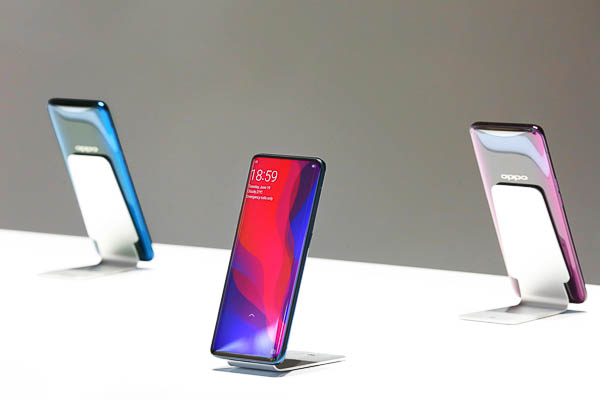 Paris, 19 June 2018. Is 93.8% the winner? That’s the screen to body ratio of the new Oppo Find X smart phone, a model that Oppo must hope will propel it into the real prestige phone ranks. Of course there’s a lot more to it than that. But the “holeless front and rear design” could well be what makes this phone stand out from the competition.

Read here for the official facts and figures provided by Oppo. Before picking up the Oppo Find X, let’s quickly cover a few facts not included in the press material. First, the screen uses AMOLED technology, not LCD. Second, the 19.5:9 aspect ratio, 6.42 inch screen doesn’t shoot for the overkill resolution of some modern premium phones. Its uses 401ppi resolution – that’s the same as an iPhone 8 Plus. Of course, the iPhone has fewer pixels because it has a much smaller screen. In grid terms, the Oppo Find X offers 1080 pixels wide by 2340 pixels tall.

Is that disappointing? Not at all. Many higher resolution phones default to a 1080 pixel wide picture resolution in order to reduce power demands, and few users notice.

To be clear, there is no analogue headphone connection. The only holes in the unit are on the bottom. There’s a USB Type-C socket for power and USB On-The-Go connectivity, and an outlet for the speaker. Also on the bottom is the tray for the SIM. On the face of the section of the phone that slides up to reveal the cameras is the earpiece. The earpiece – the little speaker you put to your ear when making a call – is hidden on the retractable camera section of the phone. There appears to be an almost invisible slot at the top of the screen to let the sound out.

Finally, and unusually for a premium phone in 2018, the Oppo Find X is not waterproof certified. The company says that its fine for splashes and rain. My conclusion: take care not to drop it into any body of water.

Oppo Find X in the hand

Our editor has already written up most of the facts about the phone. What I can add is a little bit of hands on. The Oppo Find X will be available from August, so things can’t possibly be completely final yet. Nonetheless, there were a few dozen of the units at the launch, powered up, over which journos were politely squabbling. I managed to play with a couple of them.

The first thing to note is that they are not especially large, despite what a 6.42 inch screen may imply. The screen is very large, but the rest of the phone isn’t. Oppo says that the … well, I guess I’ll call it the bezel … is only 1.65mm wide at the sides and 1.9mm wide at the top. That’s with the camera retracted.

As you can see from the photos, the thing really is just about all screen. They felt great in the hand. So good, I was weighing up in my mind: would I want to hide this beauty in a case? The two colour schemes, Bordeaux Red and Glacier Blue, are both handsome. They look coloured or black or somewhere in between depending and the angle of your eye and the light falling on the phone.

Given the likely pricing (well north of a thousand dollars), would you want to risk not putting it in a case? And I have to wonder, what case is going to work with a phone where the top section drives itself up out of the body of the phone by a centimetre or so. Oppo phones traditionally come with a thin case, and it’s been rare so far to see third party cases for Oppo phones available in phone accessory shops. Although some models have been able to use iPhone cases, given the similarity in dimensions.

I put that question to Oppo. It says that a case will be included with the phone and that there will be a variety to choose from. It added that it was inviting third party case makers to work with it.

There were no obvious surprises with the operating system, outside the specific demands of the unlocking system on this phone. There is no fingerprint scanner. To unlock you press the power key then swipe up, and that pops out the camera section. It uses its several scanners to identify you, and then it unlocks the phone.

Oppo says it operates fast. A few demonstrations I saw of real people with real Oppo Find X phones had it operating almost instantly. When we get one to test formally, we’ll give a more considered opinion on how well this works. Oppo says that odds against a false positive are one million to one. But in everyday use it is false negatives which are especially irritating.

There being no headphone socket, Oppo will be providing wireless – Bluetooth presumably – ear gear.

The screen was clear. Sometimes with things right at the edge, which is curved, the touch sensitivity didn’t seem to be quite as high as it was in the flat part of the screen, requiring a couple of touches or taps to register properly. But I should note that was with a phone grubby from the ministrations of many fingers.

One last thing: this writer has been using Oppo products for something close to fifteen years. Mostly they’ve been home entertainment products. And he has always assumed that Oppo is pronounced as, well, Oppo. Now he has been informed that the first O is long, not short. Oppo is, in fact, pronounced Oh-poh.

The author attended the launch of the Oppo Find X smart phone in Paris as a guest of Oppo. The Oppo Find X site is here. The Euro prices are 999 Euro for the 256GB model, and 1,699 Euro for the SuperVOOC (full charge in 35 minutes), 512GB Lamborghini model. I’m told that the Australian pricing will be set independently and that they will probably be more affordable here.