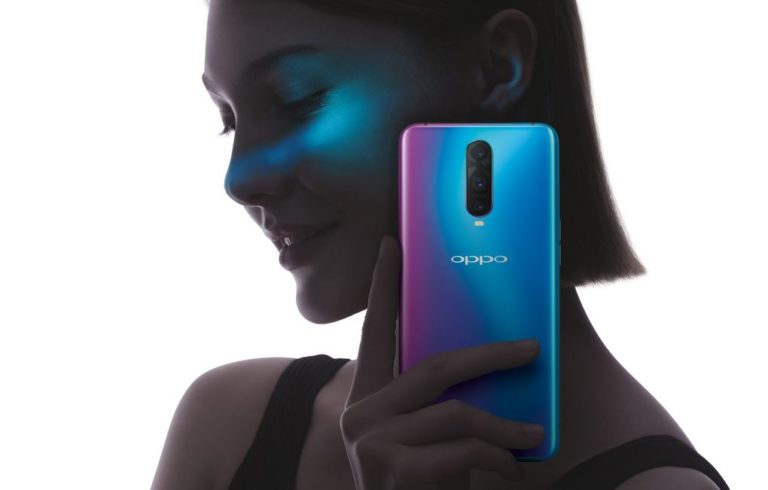 In the beginning was the OPPO R-series. And all was at peace with the world wanting good value, performance and a little class. Enter the OPPO R17 Pro, and it’s a hell of a phone putting many flagships to shame

OPPO R17 Pro is an outright winner. But let’s do the review anyway to see if all that glistens is Emerald Green or Radiant in the Mist?

How we rate it on price

This sits in the upper-mid tier where competition from last years flagships like the Samsung S8, LG V30+and more traditionally dominate. These have things like Qi charging or Qualcomm’s 835 2017-18 flagship SoC. There is nothing wrong with buying these either – amazing value too.

But the OPPO is new tech. Added to what are two of the most attractive colours it stands up last year’s flagships.

There is also an OPPO R17 (Website here) for $699, and we will highlight some of the differences in this review.

The first impression is svelte, Emerald Green (dark iridescent green) glass slab with a small top teardrop (no ugly notch), very narrow bezels and almost no chin. It has 91.5% screen-to-body-ratio.

From what we can find there are about a dozen variants for different countries and carriers. It is also sold elsewhere as an RX17 Pro.

We issue the standard warning that you must buy the genuine Model with Australian firmware as it works on all Australian Carrier LTE bands and can make a 000 emergency call without a sim.

It is one of the largest AMOLED screens available. It is for people that use the phone as a primary onramp to internet and email. Despite its massive screen size, it is physically small. And at 402 ppi it is pin sharp.

Colours are accurate, and there is an adjustment for Cooler, Default and Warmer as well as Night Shield (low blue light).

Gorilla Glass 6 is twice as resilient as the fifth generation and can survive 15 one-metre drops on to a rough surface.

Performance is very much like last years Qualcomm 835. But it has added a faster Adreno 616 GPU, faster Image Signal Processor (for the camera) and support for Android Neural NN or Hexagon Neural Network for on-device processing. All in a more power-efficient 10nm SoC that does not appear to when under load.

The standard R17 has the Qualcomm Snapdragon 670 Octa Core.

As expected it was 867Mbps at two metres from our reference D-LinkAC-5300 router, and it held that to 4 metres. It then gradually dropped until 2.4GHz took over at 30 metres. OPPO knows how to make an antenna.

BT 5.0 supports SBC by default. Hidden under Bluetooth Audio Codec, you can enable Bluetooth AVRCP 1.6. It then allows you to change the SBC (default) to AAC, aptX, aptX HD, and LDAC. You can also get 32-bit/96kHz sound as well.

The small downwards-firing speaker delivers some upper-bass, extremely good mids and treble falls off from 10kHz. It is a mid-signature that allows substantial adjustment (in headsets anyway) for bass or bright vocal.

Ringtone reached 82dB – you will hear this. Voice (handsfree) topped 70dB and music 73dB. It is what we have come to expect from  OPPO’s audio heritage.

It uses Qualcomm’s Aqustic audio technology and has a Real Original Sound Technology EQ that requires a headset plugged in where it makes a reasonable difference adding +/-12dB to bass, mid-range and treble.

A live Karaoke setting allows you to use a BT mic and hear yourself in the buds.

We tried the device with a pair of Sony WH-100XM3 headphones that support Hi-Res aptX HD and LDAC.

There have been some comments that the under-glass fingerprint sensor can be unreliable if you add multiple fingerprints. We did not find that at all.

Carrying a power bank is obsolete because OPPO has Super VOOC – 30 minutes to charge. Even 10 minutes will give you 40%.

The downside is that it must use the charger else a standard 5V/2A will take over five hours.

Geek Bench exhausted the phone at 100% load in 640 minutes. That is amazing.

I have one gripe – the charger is too wide for typical Australian wall sockets or power board – it takes two spaces.

Colour OS 5.2 is its User Interface, and it is increasingly getting ‘lighter’. It is necessary for the Chinese audience where Google services may not be available – so it includes OPPO variants of all Google apps.

OPPO’s R17 Pro is well made with local service in Australia.

The R17 Pro comes with three cameras (compared to the dual camera on the R17).

A variable aperture adjusts to fading light changing between f/1.5 (dark) and f/2.4 (light) to get as much light and detail as possible.

The third camera is Time-of-Flight (TOF) that emits nanosecond bursts of infrared light to get accurate depth information and increased detail in photos. According to OPPO, it can be for 3D scans as well as space mapping for AR (augmented reality) functionality. There is no software for this yet, but the potential for 3D mapping (of your body shape for example) augers well for online shopping.

HDR mode uses RAW photo data that results in a much cleaner and richer final image.

Camera summary: Amazing and performs well above its price tag would indicate.

Amazing colours, verging on saturated, full detail and sharpness. I had to look twice at my reference shots as HDR recovers details I had forgotten were there.

AI mode brightened the shot – whether it was needed or not!

Two things help low light. First, OIS that every camera should have. It allowed longer exposures without blur. Second, the variable aperture (and big pixels) kicked in producing one of the best, if not the best, indoor, no light shots I have ever seen.

Ultra-Night Mode that lets HDR do its stuff.

It is a top-notch (forgive the pun) selfie with 25MP and a set of AI-driven dedicated beauty mode. Intelligent facial beautification will give you a facelift, enhancing your makeup as well as eight other real-time adjustments — great for dating sights.

However, it is fixed focus, so you need to take shots at arm’s length to really get good ones.

I am excited by the Qualcomm 710 SoC and what it can do. I have grown used to OPPO’s Colour OS and find it is just a not-so-steep learning curve.

And OPPO makes some of the more innovative phones as well –Find X (GadgetGuy review here) for example.

Would I buy it over a Galaxy S8+ or LG V30+? Yes, I suspect so if only to have some of that latest tech and I love the new colours.

Features
Value for money
Performance
Easy of Use
Design
Reader Rating4 Votes
Super VOOC renders battery banks useless
Best camera under $1000
Great OPPO build and support
No IP rating
No microSD (at least in the review although there is a hybrid sim/microSD at Officeworks so go for that!
No 3D TOF software yet
4.6