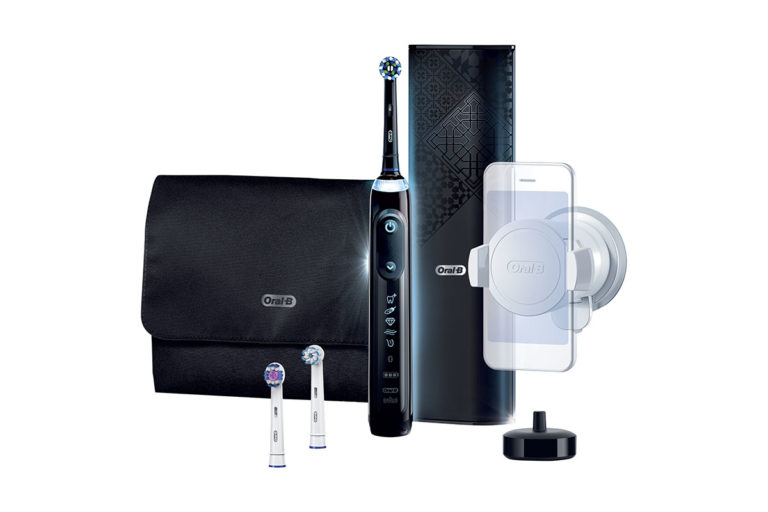 You can get a “smart” version of pretty much anything these days. Even a toothbrush. So, let me introduce the Oral-B Genius AI electric toothbrush.

How I got here

I’ve been using an Oral-B electric toothbrush since 2015, ever since my dentist recommended it, after looking hurt that I’d presented such an appalling set of choppers to him.

I see from my records that I paid $55.75 for it. This was the most basic possible model. The powered section stood on an inductive charger. It had Nickel Metal Hydride batteries and a single on/off button. The only concession it had to smarts was a timer. After three minutes it would gesture to you having done your oral duty for that session with three brief pauses. But after five years of use by my wife and I – we use separate heads – it was getting rattly.

A couple of weeks ago I was seduced by a special at my local supermarket for an Oral-B electric toothbrush. There it was on half-price special at Coles. Just $22.50. Time to update!

The new one looked the same, but was much smoother. There were two major differences. The “you’ve done enough” timer was two minutes rather than three. (Had it really changed? Had expert opinion in the dental community brought the time down in that five-year period? Or was my recollection of the original three-minute timer incorrect?)

And, damn it, the power cord on the charge pedestal was much shorter than on the old one, making it hard to put the toothbrush where we’d previously kept it. We’d barely run it in when Oral-B let me know about this new, smart electric toothbrush.

Oh, but there are plenty of differences. With the Oral-B Genius AI electric toothbrush you get:

As for the brush itself, it has a battery rated as capable of lasting for two weeks. It has a bunch of different brushing modes. And, of course, it’s smart. Which is to say, it monitors things, provides feedback, stores the information and uploads it to an app, available for iOS and Android. There, if you’re something of a tooth-cleaning obsessive, you can pore over your stats.

The connection is via Bluetooth. After an initial pairing, subsequent connections are fast. If you run the app while cleaning – that’s where the phone holder comes in useful – you can persist in the six different cleaning zones on your teeth to ensure all are done thoroughly. So this is a more focussed system than simply having an overall cleaning time.

Another point of variance from the cheap unit is the provision of a bunch of different cleaning modes. Once you’ve pressed the power button, you can cycle through six modes:

All but Daily Clean have an indicator light on the toothbrush. You can edit these in the app, disabling some or rearranging the order in which the mode button cycles through them.

There’s also a light ring just under the head. By default, this glows white when the toothbrush is on. You can change this to one of ten other colours in the app. When you’re brushing, if this ring changes to red it means that you’re pressing too hard.

If you don’t have the app connected, the toothbrush remembers at least some of the data and uploads it to the app the next time it’s connected. You can inspect your history, but that consists only of a bar chart showing the total cleaning time for each session.

This isn’t like, say, Fitbit devices where you have an account and the data is held in the cloud. It seems to be local to your app alone. Well, kind of. I installed the app on both my Android phone and my iPhone. The Oral-B Genius AI electric toothbrush was quite happy to connect to whichever phone had the app open, and upload all data to that app. What that means is that if you share toothbrush body with someone else, the app won’t distinguish between the two of you.

The Artificial Intelligence is, I think, in how the Oral-B Genius AI electric toothbrush determines which section of your teeth it is cleaning. It seemed to get it right. It must have sensors to determine its orientation and motion for the algorithm to work on.

It did that for me, I think, by making sure I didn’t miss any areas of my teeth. And while I’m not too sure about some of the modes – the Whiten one sounded like a car revving – having a few speed options is good.

You can read other GadgetGuy toothbrush reviews here