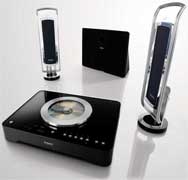 The Oregon Scientific Music Element is certainly a breath of fresh air when it comes to standard mini-stereo design. Classified as a 2.1 system, the Music Element consists of a base unit, adorned in a glossy piano black finish, two svelte vertical speakers and a sub-woofer unit.

The central unit uses of a top-opening CD player as well as an integrated AM/FM tuner. A faint orange LED readout provides track and station preset information and is situated on the top, which can be a tad difficult to read if you place the unit on a high shelf. Small silver buttons are also present for switching stations and advancing tracks, but you’ll probably use the remote control most of the time.

A downside to the finish used on the Music Element is that it collects and shows dust very easily. Fortunately a wipe cloth is supplied, and you’ll probably find yourself using it quite often.

The CD will support a variety of music formats including MP3, WMA, CDDA, CD-R/RW and there are 40 radio presets for storing your favourite stations. A CD shuffle mode is provided to play your music out of order, and there’s a Repeat mode to play a single track or entire CD continuously.

The remote control follows the design ethos of rest of the system and is a combination of high-grip matte and glossy black finishes, plus silver buttons. Included are controls for the CD and radio, volume, sleep timer, auxiliary line-in, and a toggle for displaying RDS info. There are seven different equaliser modes (Pop, Jazz, Rock, Classic, Dance, Club, and Concert), which can be made from the central button and 4-way rocker.

In terms of connectivity, the Music Element has RCA-style auxiliary input and output ports, meaning you can hook up an additional music source, such as an iPod, or send music out to a tape deck or other device. There’s also a 3.5 mm headphone jack, although this would be better positioned at the front, rather than back, of the unit. There are also connectors for AM and FM radio antenna, which are provided.

While looks are one thing, what about the sound? The Music Element uses something called Flat-Panel Speaker Technology powered by NXT SurfaceSound. This means that the speaker can be much flatter than traditional cone speaker, allowing for unconventional designs. The Music Elements are tall and very flat, with clear plastic borders surrounding a floating rectangular speaker patch. They come with a wall mount bracket, or can stand on their own with the weighty stands that are included. While they do produce a clear, crisp sound, they lacked real depth and volume, despite the inclusion of a sub-woofer.

Ultimately, this system is best suited for small spaces, such as in an office or bedroom, where filling a larger area with sound isn’t a necessity. For those who want a unique looking system that defies convention, the Music Element could be just the trick. However, if big, deep sound is what you’re looking for, you’ll be better off with a stereo that uses more conventional speaker technology.