Organising your multimedia collection with a TViX PVR 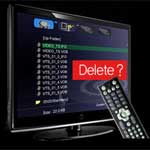 There are multiple levels of organisation for all your multimedia files in the TViX 4130 and 5130 PVRs. But it is a little different to the kind of organisation you might be used to. These units don’t use typical iPod terms like ‘genre’ to organise and access your media. Instead, you do it yourself by the amazingly intuitive system of placing the files into a sensible organisation of folders.

One thing we have discovered in recent years is that any other form of media organisation is horribly, horribly slow. One of our office computers has over 300 CDs worth of music in MP3 and WMA and AAC formats, plus dozens of videos and too many thousands of photos to determine for sure. And they are scattered everywhere. Some are in My Documents, others in various folders within master Media or other device specific folders. It’s all a thorough mess.

But with the TViX units, you simply create a Picture folder, a Music folder and a Video folder. Then you copy your media files to the respective folder. But, we suggest, not directly. Instead copy them in some form of sensible organisation of folders. For example, if you have the Beatles Abbey Road CD on your computer in MP3 format, copy that to a Beatles – Abbey Road folder within the Music folder on the TViX unit. Do the same with your other media and you will never have any trouble finding the item that you want.

If you want, you can delve into deeper levels of organisation. For example, the hard disk drive in the TViX PVR need not be one continuous ‘drive’ but can be partitioned into several independent virtual hard drives. You can jump between these with the press of a key, which can be extremely useful for keeping media for different members of the family separate from each other.

You may instead choose to keep some of your media on an external USB hard disk drive, and this, of course, makes the TViX’s capacity effectively unlimited. It can also can be useful if you have a number of DVDs that you like to watch fairly frequently. With suitable software you can copy the whole DVD to your computer, and then transfer it to the TViX, or to a USB hard drive attached to it, as a disc image. When the TViX plays this, it treats it just like a real DVD, so you get all the menus and audio selections (even DTS surround sound can be selected).

You can also plug many MP3 players into one of the USB ports on the unit and load tracks into it from the TViX, so there’s not even any need to switch on your computer.

Does all this sound a bit computer-like? Well, it is in one way. On the other hand, you won’t be sitting at a keyboard. Instead you’ll be sitting on your couch, remote control in hand, and navigating to precisely what you want to see or hear on your TV. Somehow, that doesn’t seem computer-like at all.