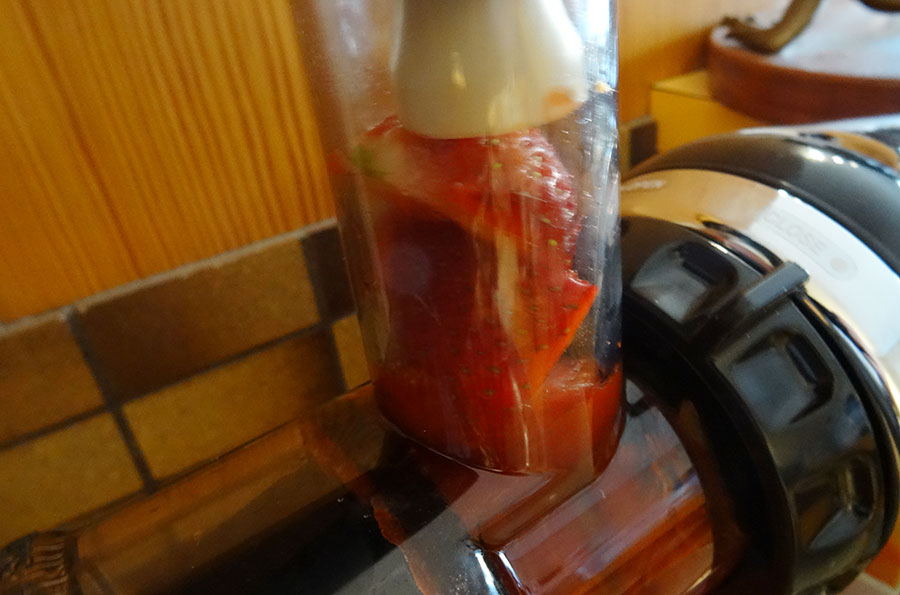 With a name this big, you’d hope the Oscar is one of the best juicers on the planet, and you know what? It’s not far off.

Traditional juicers have a pretty basic approach to pulping fruit and turning them into tasty, tasty beverages, with lots of blades slicing through the fibre and leaving the juice behind.

But this method can also leave pulp behind that still has plenty of liquid, and that’s where the pressure juicing method comes in. Also called auger juicers, these appliances use parts to push the fruit into the walls and gears of the machine, crushing the fruit bit by bit and forcing juice out.

The process of the Oscar Neo DA 1000 Ultem Touch Juicer (yes, that is a ridiculously long name) relies on three steps to accomplish this, slowly pushing out more juice and more minerals than a regular central blade system.

This juicer also comes with the bonus of being able to do more than just make juice, with extra nozzles and fittings making noodles, processing veggies into pulp, and pushing out bread-sticks for you to bake, too.

Taking a first look at the Oscar Neo, it’s a big and heavy juicer that occupies more space than your traditional juicer. We’ve mentioned the difference already, but aside for the technology and method, the look of the Oscar is also different.

While conventional juicers are generally tall and occupy vertical space for their function, the Oscar Neo comes out at you in a more horizontal fashion, taking up more space than you otherwise might expect.

Part of this is because there are so many parts to make this juicer do its thing, while the other part is the big shiny motor sitting at the back driving the parts.

Making it work requires building the parts up for the function you want to use, but once that’s done, you simply push chunks of fruit through the chute and let the juice pour out of the bottom spout and the juice-less fruit force its way out of the front.

Effectively, what this juicer does is crush, crush some more, and then crush one final time, removing as much liquid as possible from the fruit, before delivering you a dry coarse fibre.

Testing it with both hard fruit (apple) and soft fruit (strawberry), this juicer had no problem pushing its way through the fruit and turning it into what we wanted most.

The results speak for themselves, with cloudy juice present from the extraction, and a relatively easy cleaning job, since while there are many parts, you don’t have do too much brushing of the fibrous filter at the front of the juicer.

Another positive side of the machine is that it’s pretty quiet, and won’t disturb people much if noise is an issue. You can take phone calls while you’re making juice, and you won’t have to worry about a high pitched whirring noise corrupting your eardrums at the highest volumes ever.

Also of note is the fibre, which is pushed out in compressed chunks and falls into a box below. We couldn’t find much of a use for it, especially since it doesn’t taste particularly good, so throwing it out is easy and painless.

One downside to this system is that the Oscar has a lot of parts. It’s not just two or three bits that connect, it’s like building a complicated model, with a bit connecting to another bit linking to another bit inside of another bit and so on and so on. It’s not an easy system to remember, and as such, you’re forced to clean multiple pieces.

It also can’t be run for more than 30 minutes as it gets hot, and based on what we’re reading in the manual, isn’t good for the health of the unit.

Thirty minutes of juicing might seem like a lot of juicing, especially since juicers are generally speedy appliances, but that’s another point with this model, and that’s it takes a little longer to get your juice out, since the machine is sending the fruit to one part of the machine, winding it through the tubes, crushing it, sending all the juice out the orifice close to the base, crushing it some more, letting the rest of the juice out, and pushing the pulp one more time through the sieve at the front of the juicer, sending the final drops back out while leaving a gritty tasteless fibre behind.

That’s a lot of steps, and it takes a little more time, understandably.

Another factor is the cost, and with a recommended retail price of $529, this isn’t a cheap product by a long shot. Most high-end juicers sit at between $250 and $350, and while these aren’t the pressure juice system that the Oscar Neo is, they also don’t cost as much.

That said, if you love your juice — and we mean really love your juice — you can probably justify the cost, and since it does a little more than turning fruit to liquid beverages, you might even get more use out of it.

It’s not the cheapest gadget on the block, but if you want the maximum amount of juice from your fruit, the Oscar Neo DA 1000 Ultem Tough Juicer — a juicer with a ridiculously long name — is the one for the job, providing liquid nourishment without killing your eardrums.

Overall
Features
Performance
Ease of Use
Design
Reader Rating1 Vote
Does an excellent job of removing fibre and turning the fruit to juice; Pretty quiet; Makes noodles and breadsticks, too!;
Loads of parts can make the system finicky; Slower than your typical juicer; Expensive;
4