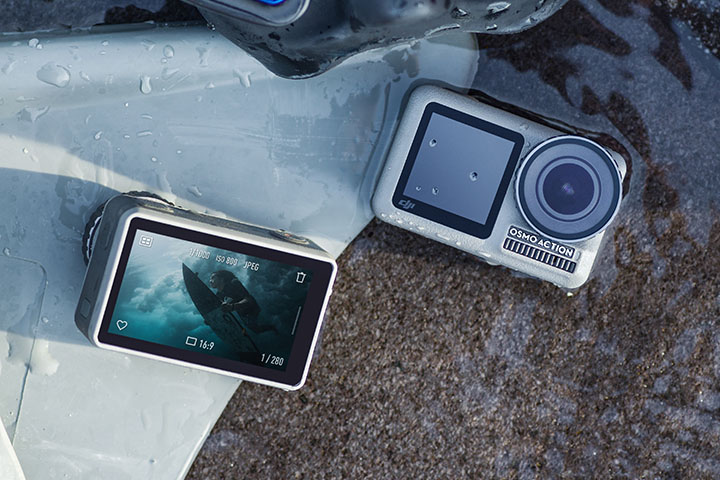 Of course, DJI drones have had DJI cameras for years. And, of course, you can use the Osmo Action on a drone. But this one is really targeted at the traditional users of action cameras. DJI expects you to strap one on the front of your mountain bike or helmet, or take it along while you’re scuba diving or surfing or sailing. You know, all that strenuous stuff.

To that end, DJI has made the Osmo Action small, light and tough. The camera itself, including the screw-on lens protector, measures 65.5mm wide, 42.1mm tall and 35.2mm deep. With battery and a microSD card installed, it weighs 124.5 grams.

It feels very solid in the hand and inspires trust.

As you can see, those dimensions make it rectangular. Looking from the rear – that is, in the way you’ll most commonly interact with the Osmo Action, the lens as at the front left, near the top. At the back is the 57mm – 2.25 inch – main display. This is touch sensitive and, despite the small size, has a resolution of 640 by 360 pixels. That comes to 325ppi. DJI rates the brightness of this display at 750 nits.

At the front, next to the lens, is another monitor. This one isn’t touch sensitive but is very useful for selfie-style work. It’s only 36mm in size – 1.4 inches – and has the same brightness as the main monitor. DJI says that its resolution is 300ppi. In practice, that monitor is somewhat smaller than the size suggests. Whereas the rear monitor has a 16:9 aspect ratio, the front one is square. It’s 25mm on a side. (Incidentally, that suggests a resolution of 300 by 300 pixels.) When showing you the camera output in 16:9 mode, it’s heavily letterboxed.

The battery goes in a largish hole on the bottom of the Osmo Action. The back plate of the battery becomes the bottom of the camera. It’s secured by catches on both ends and a rubber seal should keep things watertight. The battery is rated at 1,300mA and takes 90 minutes to charge. DJI says that it will record 1080p30 video for up to 135 minutes without image stabilisation, or up 63 minutes at 4K/60p with RockSteady stabilisation on. In both cases, that’s with the screen going to sleep after a minute. If you’re actively framing things, expect a shorter life.

A door on the left side opens to reveal the slot for the microSD card and a USB Type-C connection. You can use the latter to copy files and to charge the battery in place. A USB Type-C cable is provided with the unit. When this door is in place, it presses a panel down over those connection points to seal them up.

The Osmo Action can support microSD cards up to 256GB in capacity in FAT or exFAT format. Of course, the cards should be U3 speed rated. The device can record video at up to 100Mbps, so that high speed is required for reliable operation.

There are three control buttons on the body of the unit – on/off, record and mode select/return – but a lot more control can be exercised using the touch sensitive display or the DJI Mimo app.

The above dimensions are for the camera alone. It comes with a hard plastic frame into which it locks very securely. One the bottom this has the industry-standard twin-lug attachment point. Apparently – there were none with the review unit – the Osmo Action is provided with two adhesive mounts, one curved and one straight, a quick release base and a locking screw.

Given the industry-standard lugs, you can use all manner of mounting devices, not necessarily DJI-branded.

Spare batteries are available for $29 each, or you can buy the Osmo Action Charging Kit for $109. This includes two additional batteries and a standalone charger (although you’ll need to provide the USB power adaptor). With the review unit was a neutral density lens filter. This can screw on over the lens instead of the supplied clear filter. I couldn’t see this on the DJI website. The filter was ND8, which stops the light down by 3. I suppose one might have circumstances where are slower shutter speed is required. Particularly at 24fps, there’s less likely to be motion judder.

The Ozmo Action has a 1/2.3” CMOS sensor with 12 megapixels of resolution. It can shoot stills of 4,000 by 3,000 pixels and it supports both JPEG and RAW. There are burst capabilities, exposure compensation and timer shots available.

The Osmo Action is robust. It’s safe to use at up to 11 metres of water depth without a special enclosure, and good for use at temperatures of -10 degrees C.

The Osmo Action camera is elegantly designed and easy to use. A swipe up from different sides of the screen lets you change settings or choose modes. You can save a number of custom modes for quick selection. The app is cleanly laid out. I guess if I was going to criticise it, the layout of app and the camera’s own control screen were quite different so you’ve got two things to learn rather than one. On the other hand, they are both well-designed for the sizes of the screens in which they work.

Speaking of which, even in a bright ambient environment the main screen on the back of the Osmo Action was clear and easily  viewed. I’m thinking that with full-on bright summer sunlight – it’s winter here at the moment – it might be hard to see the menus. A little shading with a hand should sort that.

You can have the unit start up and commence shooting with just a press of the record button. In the settings you can choose what you want to happen there – photo, video (the default), slow motion and so on. It took around three seconds to get going from being switched off.

The voice control capability could be useful. I found I had to speak quite sternly at the camera to make it respond, but that’s probably better than too many false positives.

The image quality was extremely sharp. Colour depth was good. As with the very best of phones, the video is easily broadcast quality. Autofocus was fast and true. As a still camera it’s fairly limited due to it being locked into wide angle mode. But given that constraint it also produced very respectable results.

But it’s the video stuff that’s most important. I found two functions provided by the Osmo Action particularly intriguing.

The first was RockSteady mode. The device doesn’t have optical image stabilisation. RockSteady is its electronic image stabilisation. This doesn’t work in 1080p or 720p modes, nor with 4:3 aspect ratio, but it does for 4K and 2.7K in regular 16:9 aspect. What’s interesting is that the “effective pixel” count is 12 megapixels. For still photos the output resolution is 4,000 by 3,000 pixels. Multiply them together and you get 12,000,000. So, we have a sensor with a width of 4,000 pixels. 4K video has a width of 3,840 pixels.

Electronic video stabilisation typically means grabbing larger frames than is required for the final output, then aligning the content between the frames, cropping off the excess at the edges. As you can see, our excess with the Osmo Action is only 160 pixels. Nonetheless, it seemed to work quite well, softening the jarring as I walked around with the camera. Ideally, you’d combine the device with some kind of physical stabilisation handle, but RockSteady does a respectable job. Importantly, when I moved the camera intentionally, it seemed to sense it so the point of aim wasn’t sticky.

The other thing of interest was the HDR mode. I guess I was hoping too much in thinking that this HDR was the same HDR as that in UltraHD Blu-ray. No, it’s not. What it does is scale a wider range of brightness down to fit into the SDR range the Osmo Action is capable of recording. Using a very high contrast test environment, it lifted the detail in the darker areas of the image when viewed on my OLED TV, but it still used an 8-bit SDR format.

Indeed, looking at the footage I shot on the OLED was the way to enjoy it. The output from this camera was simply magnificent on that screen, so long as I kept to 60p maximum frame rates.

In addition to using the DJI Mimo app to control the camera, you can watch back videos on it. I found the quality was only so-so, with some blockiness. I guess there were Wi-Fi bandwidth limitations on the “Auto” setting. But you can change the connection from Auto to either 2.4 or 5GHz bands within the app. I tried the latter and it worked better, although it still seemed that the 4K/60p video my have been downscaled to make it easier to transfer.

Using the USB connection on the camera, transfer speeds were pretty slow. At around 30Mbps. I was using the SanDisk Extreme 64GB card that DJI put in with the review unit. It’s rated at up to 160Mbps read speeds, and I used a USB 3.0-rated cable. I guess the USB port on the Osmo Action is only rated at USB 2.0 speeds. You’ll get better results popping the card and putting it into a fast card reader.

Indeed, that’s what I did. Via the camera port, the transfer of 7.4GB of video took more than four and a half minutes. Using the card reader, it took less than one and a half minutes, with a reported speed of 90Mbps.

The DJI Osmo Action, looks and feels robust. It works very well. It’s reasonably priced. And it has most of the functions one could want. Can you want much more?

Features
Value for money
Performance
Ease of use
Design
UltraHD recording up to 60p
Plenty of modes
Solid, waterproof construction
Good value
Could do with faster file transfers via USB
4.5