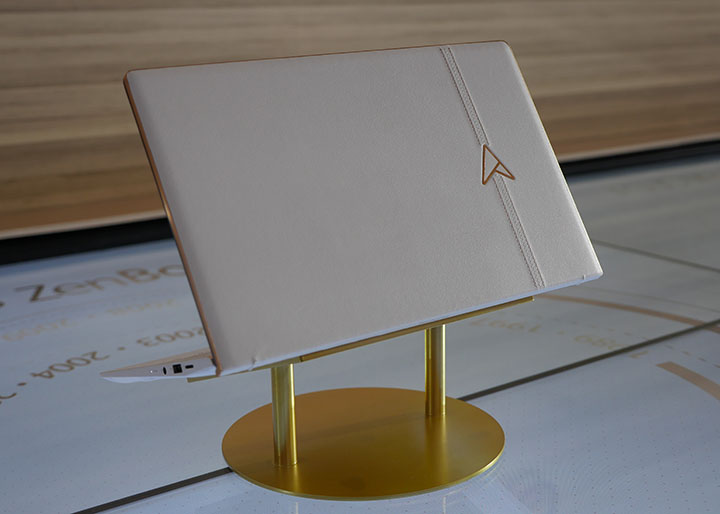 Taipei, Taiwan, 27 May 2019 – In addition to launching the astonishing ASUS ZenBook Pro Duo, the company showed off a bevy of new things for the coming year. These come under both its ASUS and Republic of Gamers brands. Here are a few of the highlights.

ASUS launched its first product way back in 1989, so this year it is celebrating its thirtieth anniversary. As part of that it’s releasing a limited run, special edition phone (of which I’ll say no more, since it won’t be coming to Australia), a high end motherboard and a very stylish ZenBook (pictured above).

The ASUS ZenBook Edition 30, as it’s called, is highly distinctive thanks to the white hand-stitched leather finish, and the Star Trek-like logo. It isn’t really Star Trek. It’s a stylised “A” monogram and is “a representation of the Chinese symbol for people and shows the humanitarian side of ASUS”.

Of course it features ASUS’ latest technology, including the ScreenPad 2.0 (see below). It runs an Intel Core i7-8565U processor with 16GB of RAM. Storage is a 1TB PCIe x4 M.2 SSD. The screen offers FullHD resolution with a diagonal of 13.3 inches. It’s driven by an NVidea GeForce MX250 video card.

But, really, who cares about this computer’s specifications. The ASUS ZenBook Edition 30 is all about making a bold, visual statement.

Also announced under the Republic of Games moniker were two new gaming headsets, both more upmarket than the company’s previous offerings.

The ROG Theta headset offers “superior 7.1 surround sound”. Each earcup is loaded with four drivers. Three are 30mm in diameter while the fourth is 40mm. They are allocated to front channels (that’s the larger ones), centre, surround and surround rear. ASUS says that by making all four drivers on each side larger, it’s able to deliver impressive bass without the need for a “subwoofer” driver.

The microphone is assisted by “AI-powered” active noise reduction. Apparently this avoids accidentally cancelling out the voice by using two intelligent techniques. First, thousands of background noises – from lawnmowers and air conditioners to barking dogs – have been analysed and profiled. The processing within the head set can identify those and remove them. Second, the system learns the voice of the user to ensure it remains unmolested by the processing.

The other headset is called the ROG Theta Electret. The headphones in this set are passive: a 3.1mm socket is used and they’re driven by the computer into which they’re plugged. The “Electret” part of the name comes from the technology used for one of the two drivers in each earcup. ASUS says that “Electret” is its name for electrostatic technology. It seems to have pulled of quite a neat trick with this head set. You see, electrostatic headphones (and loudspeakers) have a great reputation amongst audiophiles for the transparency of their sound reproduction. But that’s offset by the need for a special driver to make the headphones work.

You see, electrostatic speakers don’t use a coil of wire in a magnetic field to push a cone or surface. Instead the signal is boosted enormously in voltage and applied to two perforated metal plates, called stators, which are parallel to each other and slightly separated. In between them is an extremely thin sheet of conductive, but high resistance, material to which a fixed voltage – also very high — has been applied. It’s applying that charge which complicates matters. I really don’t know how ASUS could do this in a passive design, apparently without any power source. Nonetheless, that’s what it says.

Perhaps it’s easier because the “electret” drivers only handle frequencies above 7,500 hertz. So that’s only a small proportion of the total energy in the signal. The deeper stuff – low treble, mid-range and bass – is all handled by the second driver in each earcup. That’s a dynamic driver, a more conventional design.

Last year I was extremely impressed with the ASUS’ innovative ScreenPad. That combined an over-sized touchpad with a colour display screen. It could be used with virtual control buttons as a kind of accelerator for interactivity and control. Or it could show a limited range of outputs, such as video and photos. And it could work as a numeric keypad.

As we now know, a massively upgraded version of this – called the ScreenPad Plus – is a core feature of the ASUS ZenBook Pro Duo. But for those who can’t afford the $5K of that device, ASUS is expanding the original ScreenPad in two ways.

One way is improved functionality. The ScreenPad 2.0 is a little larger, and far more capable. Apps can be run within it. Pages of control functions can be accessed by swiping the pad to the side. The arrangement of the control buttons can be edited by touching and holding in the manner familiar to all from mobile phones. There’s also a hot key to instantly switch the ScreenPad function between display and touchpad functionality.

Finally, ASUS also announced its intention to become the dominant commercial PC supplier in the APEC region within 36 months. It already has the Number 1 sales feathers in its cap in the region for gaming and personal computing. As part of this goal, it’s rebranding its commercial computing offerings. No longer with they be ASUS Pro. They’ll be ASUS ExpertBook and ASUS ExpertPC.

(The writer attended the ASUS launch in Taipei, Taiwan as a guest of ASUS.) ASUS’ Australian website is here.