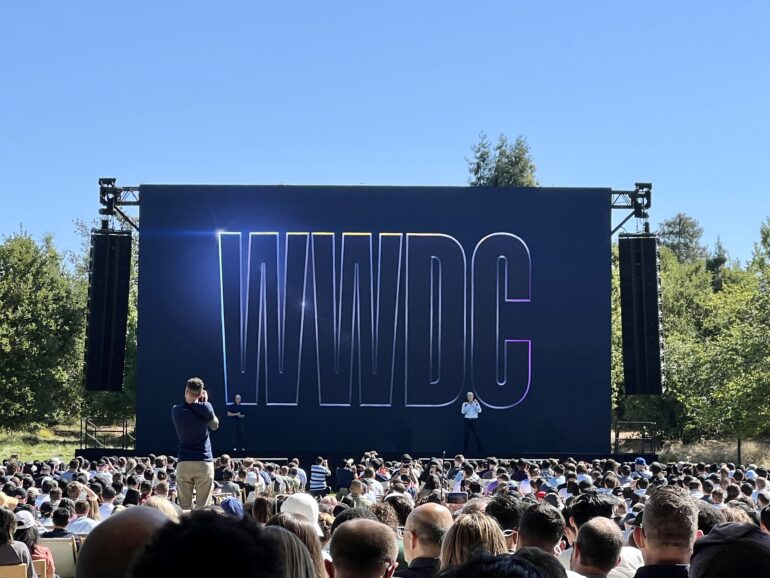 With GadgetGuy’s Val Quinn on the ground in Cupertino, we’re brining you our first look at some of the coolest features announced at Apple’s World Wide Developer Conference (WWDC). The team will cover all of the announcements later today.

Sick of auto-correct changing words in your messages and only realising it after you sent them? Well with iOS 16, you can now edit a sent message or recall a sent message. We’re told that you can make changes for up to 15 minutes after you’ve hit send. Also, all devices would need to have the latest iOS 16, iPadOS 16 or Mac OS Ventura installed.

Another great update to Messages is the ability to mark a message as unread so you can answer it later, rather than forgetting about it as it moves up your feed.

Also new in iOS 16 is the ability to customise your phone’s Lock Screen. Here’s a quick list of things you can do:

This iOS 16 feature makes it easy to share photos to the whole family right from your camera app. Essentially, you can nominate 5 people to share an iCloud Photo Library, such as family members. You can set it up to share photos automatically, so they appear when they’re taken, or you can curate based on the people in the photos, at specific date, etc. Best of all you can share right from the camera app itself, which appears as a drop-down menu.

Continuity Camera – use your iPhone as a webcam

Your iPhone can wirelessly connect to your Mac and become a high-end webcam. The benefit is you get a very high quality image, with a ‘filmic’ shallow depth of field and good low-light performance.

This includes some advanced features to make your image look better, such as Centre Stage to keep you in the frame of your shot, and it tracks you when you move around. There’s a spotlight mode to brighten your face and darken the background, but a really cool option is the ‘desktop’ view which uses the camera’s wide angle lens to simultaneously show your desktop area while still filming your face. This could be a great option for doing an online demo and creates the illusion that you have a second camera pointed at your desktop area.

This security update was announced as part of MacOS Ventura and essentially gets rid of the need for passwords. It enables you to use your iPhone’s FaceID or TouchID to sign into websites and apps, and never have to choose a password.

Apple explains that unique ‘passkeys’ are generated instead, which use cryptographic techniques, and are never leave your devices. As a result, they can’t be phished or fall into the wrong hands. The feature will be available on Mac, iPhone, iPad, Apple TV in the coming months.

This handy reminder app will help you keep track of your medications, and prompt you when it’s time to take them. You can quickly look up medications, or simply scan your medicine bottle’s label. There are also drug+drug notifications that will warn you if one drug has a health associated risk while using with another. The Australian version will use a different info source for this option and may not be as extensive. While announced for WatchOS9, this feature is also available through the Health App, so you don’t need to own an Apple Watch.

In line with the rumours, we saw two hardware updates at WWDC. This includes an all-new MacBook Air. It features a slimmer design and more powerful M2 chip. Here’s a quick summary of the features:

Valens Quinn attended WWDC 2022 in Cupertino California, as a guest of Apple.