Owlet smart baby sock – a must for all helicopter parents 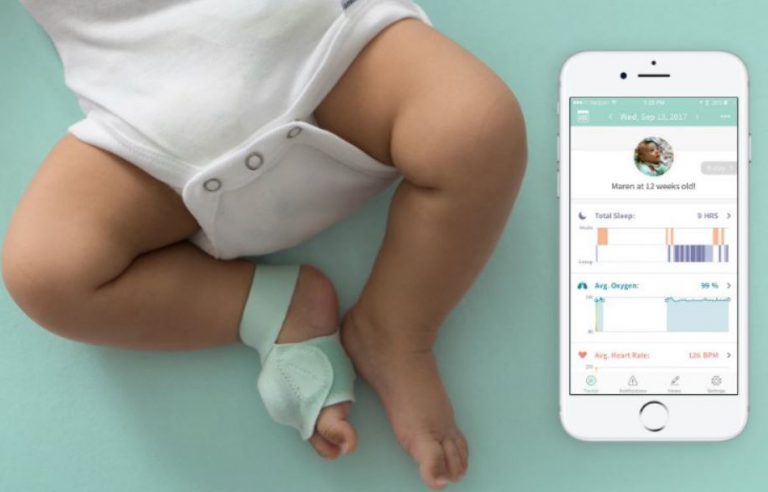 Owlet Smart Sock silently tracks an infant’s heart rate and oxygen while they sleep and notifies parents if something is wrong. It does exactly what it says!

It is a sensor sock in three sizes – up to 1 month, 1-3 months and 3-18 months that connects via a home network’s Wi-Fi to a base monitoring unit that connects via Bluetooth to an Android or iOS smartphone app.

The ‘oximetry’ heart rate and oxygen sensor are powered by a small micro-USB rechargeable battery – all contained in a soft fabric sock with Velcro fasteners. The sensor is removable to allow for the sock to be hand washed. The sensor is also a user replaceable spare part at $185 – presumably if you accidentally put it in the wash.

OK let’s address the helicopter elephants in the room

First, Owlet is not a medical device. Pulse oximetry is a well-known, non-invasive method for monitoring a person’s heart rate and oxygen saturation – SpO₂. Smartphones like the Samsung Galaxy S6 and S7 have oximetry sensors and are relatively accurate if used correctly.

Second, Owlet make no claims about preventing sudden infant death syndrome – all it can do it alert parents via the app and an audible alarm that oxygen levels or pulse have moved from the child’s usual level. It is then up to the parents to take appropriate action. It says that 70% of false alarms are from incorrect sock fit.

Third, it is not a panacea to getting a good night’s sleep. It may help stop anxious parents from frequently checking their child.

Fourth, yes it gathers the monitored child’s data. An Owlet representative said there was an app option that allowed a user to opt out of having their baby’s data shared for research. “We have a clinical team, including two physicians, that head up clinical research efforts to better understand different areas of infant health and wellness.”

As my children are now 34 and 32 it has been a long time between nappy changes for me, so we have enlisted the help of a Gadget Girl (is that a Gadgette?) with a three-month-old bub to do the field testing. Stay tuned.