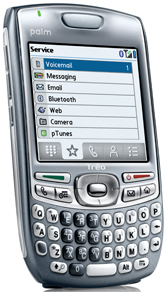 Palm may have been first in the PDA market – in fact, this year marks the 10th anniversary of the Palm-powered pocket organiser – but Microsoft’s ceaseless assault with their Windows Mobile operating system has made Palm devices a rarity.

In many ways, Palm’s new Treo 680 is a nod to loyalists who’ve stuck with the Palm platform through the years. It’s also an unabashedly mainstream device, intended less for the mobile professional and ‘geeks on the go’ than for tech-savvy everyday folk who like the idea of rolling their phone and PDA into one compact package that can also fetch their email while out and about.

While nothing about the Treo 680 is in any way revolutionary, it represents a clear evolution from the previous models of Palm-powered PDAs and smartphones. It’s certainly a few rungs up the ladder from the bulky Treo 650, which preceded the 680.

It’s also several degrees slimmer, smaller and more stylish. Palm manages to pack plenty into the Treo 680 without compromising on the neat form factor, which slips easily into pocket and purse.

As a phone, the Treo 680 is essentially a standard quad-band GSM/GPRS unit with Bluetooth and a mid-range VGA camera, rather than any of the multi-megapixel snappers that are becoming commonplace in consumer phones.

While we’ve criticised some up-market smartphones for using GSM instead of 3G, it’s more acceptable here given that the Treo 680 is consumer focused.

As a PDA, Palm has thrown everything into the soup. This easily makes it the best Palm device in the platform’s ten years of evolution, although it can barely go toe-to-toe with smartphones running the feature-rich Windows Mobile.

The roster includes all the expected applications for organising your day and your life such as a calendar, contact book, to-do list and world clock.
Â
There’s editing and viewing of Word, Excel and PowerPoint files using the bundled Docs to Go software, which now adds PDF viewing in case you receive an Acrobat file as an email attachment.

There’s also MP3 and video playback (the former uses a bespoke version of the popular PocketTunes software) and audio recording, plus support for streaming audio and video downloaded from the Internet. Of course, you can load up content on an SD memory card and slip that into the Treo 680 for hours of music and movies.

One of the small yet sensible touches is that text message exchanges are presented in a chatroom-style format, with each message appearing above the previous one from the same sender. This makes it much easier to keep track of the whole thread of the conversation without having to flick back and forth between individual messages.

Another winner is the My Treo user guide that’s pre-loaded onto the system as an e-book. It contains plenty of information and straightforward advice on using the Treo 680, along with a support database which can be updated from Palm’s online resources.

Given the decent spec sitting under the hood – an Intel 312 MHz processor with 64MB of system memory – we were surprised that the Treo 680 simply didn’t quite have that snappiness we’ve come to expect from the nimble Palm operating system. It’s fast, especially when compared to Windows Mobile, but certainly not as instantaneous as we remember.

At least there’s a full 64MB of memory available for the user, which is three times that of the Treo 650.

The screen is standard faire for recent model Palms. The keyboard beneath it at first feels a little cramped – due to the generous size of individual keys, their close location to one another and the way that each key sits well up from the surface.

Many smartphones give way on at least one of those areas with poor usability results. By not compromising, the Treo 680 shoots for the hoop, and although it takes some getting used to and an ever-present dash of care, the keyboard is a snap for two-thumb and even one-thumb typing.

The phone dialler application has a better interface than previous models with quicker access to contacts and related applications along with easier call management.

Part of the formula for downsizing the Treo 680 from the previous model 650 was a smaller battery, which is rated for ‘up to four hours’ of talk time.

Although the Treo 680 has its work cut out in competing against the big boys of the smartphone market, the affordable price and the appeal of the elegant Palm OS should help it win its share of attention. It’s also the most obvious upgrade for loyal long-time users of Palm devices who want to step up to a smartphone.

Overall
Features
Value for money
Performance
Ease of Use
Reader Rating0 Votes
Good size and style, easy to use keyboard, chat-style display of SMS messages.
Light on battery life, not as fast as you'd expect from a Palm device, no real advances for the smartphone category.
3.8