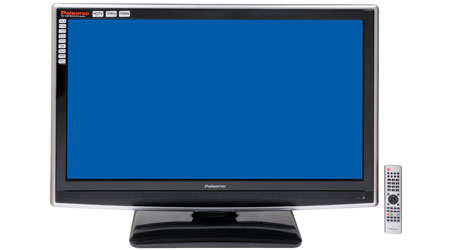 Unlike other budget LCDs offered locally, Palsonic has been operating in Australia (it’s actually a local, family-owned business) for over half a century. The TV it supplied is one of the two more expensive models of its class, and it offers at least one high-end feature: 100 hertz motion smoothing.

It also seems to offer a more highly specified panel than the less expensive TVs, with a 4 millisecond response time specified for the panel and a claimed contrast ratio of 4000:1. This seemed to be the native contrast ratio because if there was any dynamic backlight control, it was very subtle in operation and made little difference in power consumption between a full black and a full white screen.
The TV reception from the built-in digital TV tuner was excellent, thanks in large part to the high quality video signal processing the TV applied. It did an excellent job with handling interlaced video and in scaling it up to the panel’s own resolution, except that once again the TV imposed some overscan that could not be defeated, even with Blu-ray.
In fact, the Blu-ray handling was a little strange. The TV accepted 1080p24 signals, preferred for Blu-ray, but with complex and sharp content the motion smoothing circuit would break down every few seconds for several frames, producing really obvious judder.
Switching this off (setting the ‘Judder Adjustment’ to Level 1), it became obvious that the TV was converting the 24 frames per second to 60 internally, making the judder much worse than it should be.
But when I set the Blu-ray player to deliver 1080p60 instead, the motion smoothing worked like a dream. The only adverse effect of its operation was a little heat haze effect around some moving objects.
According to the Energy Rating sticker attached to the TV, it scores 3 stars and 620kWh per year. My own measurements came in within one percent of that result.
Overall
Features
Value for money
Performance
Ease of Use
Reader Rating0 Votes
True high definition display; High quality LCD panel; Good black levels; Excellent broadcast TV picture quality; Good motion smoothing processing
Can’t defeat overscan even on Blu-ray; Doesn’t support 1080p24 well; No side AV inputs
3.8