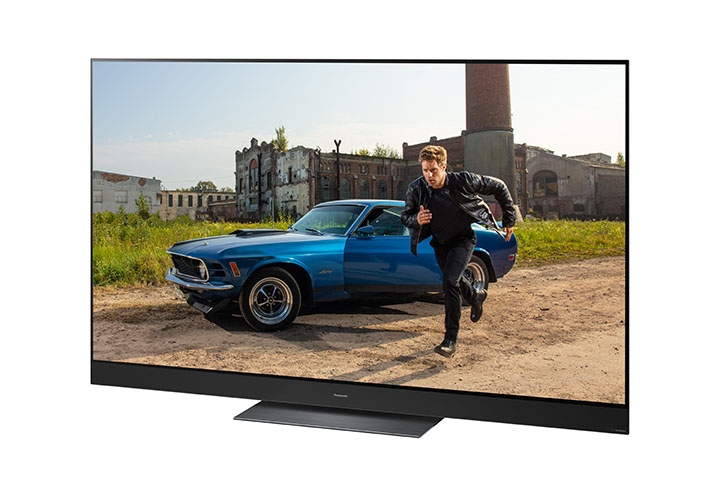 Sydney, 12 June 2019 – Panasonic conducted its major 2019 launch in the swish Four Points by Sheraton hotel, a block from what was formerly the old KB beer factory on Broadway. The centre-point of the Panasonic 2019 AV launch was its range of OLED TVs. And of that range, the premium GZ2000 model.

For the facts and figures, have a read of our editor’s take here.

Panasonic has no fewer than five ranges of non-OLED LCD/LED TVs. These offer UltraHD resolution and come in sizes from 43 inches to 75 inches and at prices from $999 to $4,999. The more you pay, the bigger you get along with the higher level of features. One thing I’ll be returning to is gaming mode. Apparently, all these models have it. Read on to see why this may be important for you.

Why so much more for the same sized TV? In this case, premium means premium. Panasonic sources its OLED panels from an unnamed supplier, which makes them to its specifications. Those in the GZ2000 TVs receive special treatment. In particular, they are supplied without the usual backing behind the OLED panel. Panasonic applies its own, a design which it says improves heat extraction and dissipation. That permits its electronics to drive the panel harder, for higher average and peak output levels. Panasonic calls this its “bespoke Professional Edition 4K OLED panel”.

The signal fed to the panel is processed by Panasonic’s latest HCX Pro Intelligent Processor. The “HCX” stands for “Hollywood Cinema eXperience”. Panasonic has maintained a lab in Hollywood for many years to assist in developing its imaging products. The aim is to accurately deliver the results sought by cinematographers and filmmakers when they’re making their films.

All three OLED models of course support Dolby Vision and regular HDR10, but they also support HDR10+ which is kind of a Dolby Vision lite. It provides for different mapping profiles throughout the program (regular HDR10 is fixed to one profile throughout), but only works with 10 bits of resolution rather than 12.

They also support something called HLG Photo. That’s a signal mapping function designed to fit a wider dynamic range into still photos. Some of Panasonic’s higher end cameras, such as the Lumix S series, either have it or can have it installed as an option. These TVs can display such photos to best effect.

It’s unwise to give pronounce on picture quality based on events like the Panasonic 2019 AV launch. What, for example, picture settings were employed? When I’m setting up a TV, I routinely switch much of the processing off since it typically does damage to the picture quality. (TVs come out of the factory with settings intended to dazzle you.)

That said, I was familiar with some of the UltraHD Blu-ray discs that Panasonic was spinning at the event, and they really did look very impressive with their colour and blacks. I could see that they had motion smoothing switched on, and that produced some picture distortion from time to time. As usual. That’s why I prefer to turn it off.

Up and away with sound

The TVs offer the usual sound options with built-in speakers, but the GZ2000 pushes further than usual with built-in upwards firing speakers in addition to the usual forwards firing ones. These assist in the reproduction of Dolby Atmos sound. Although Dolby Atmos is mostly about a new method of carrying sound – in large part as multiple “steered” objects, most of us in consumer world associate it with height channels. (Indeed, official “Atmos-enabled” speakers fire upwards and are supplied with a signal specifically processed according to Dolby specifications for this purpose.)

At the Panasonic 2019 TV launch I snuck a photo behind the GZ2000. Most OLED TVs have a very thin display panel for the top half or so of their screen. It’s usually about as thick as a sheet of glass, say 6mm or so. And so it is with the GZ1000 and GZ1500. And, indeed, for most of the GZ2000. But in the middle, there’s a kind of rectangular column extending up behind the screen from the wider housing at the bottom. At the top is a grille containing the two upwards firing speakers. From the glimpses I was able manage of the drivers within – it was hard seeing through the grille – looked to me like space-saving drivers, rectangular with rounded ends, perhaps 75mm by 25mm. So, yes, it really does have upwards firing speakers.

In the demonstrations, I wouldn’t say that I could sense much in the way of surround sound, nor overhead sound. The performance was pretty good for a TV, but I’d still recommend using an external system for sound. But before we get to that, let’s talk speed.

The company was so keen to talk about gaming at the Panasonic 2019 AV Launch that it had two 65-inch OLEDs set upside by side, along with a PlayStation and a professional gamer. She explained how much the new model Panasonic TVs are helping her. Why? Well, the picture provided by the latest 4K games with HDR make things look beautiful. She briefly switched off HDR in a game, and it really did flatten the picture, draining some of its life.

But the main reason she likes these TVs is their speed. Or, more precisely, low latency. It’s important to distinguish between two aspects of speed performance of TVs and monitors. One is the commonly quoted pixel switching time, usually from grey to grey. You’ll often see figures of 4ms to 8ms. But this is all about how quickly the pixels in the display can switch on and off. Those figures are for LCD displays.

OLED pixels switch much faster than LCD ones. How much faster? Closer to 0.01ms.

It’s all about latency

All that’s fine, but it doesn’t make too much difference to gamers. What makes the real difference is the latency. That’s the time between when the TV or monitor receives the signal and when it displays it on the screen. If you’re playing a first-person shooter, you will be at a significant disadvantage if there’s a delay. And, remember, there is always a delay.

Back in the olden days with cathode ray tubes, the delay was almost zero … maybe a millisecond or so. But with some flat panel TVs I’ve measured latencies of up over 200ms. That’s one fifth of a second, but that’s rare. From my measurements, a modern UltraHD TV with its standard movie-appropriate picture settings typically delays the image by somewhere between 100ms and 150ms.

Consider that the average person’s response time to images – when you start to move after you see something happen on the screen – is around 250ms. Adding fifty per cent to that makes it hard to win games.

The new TVs feature an improved “Games” picture mode. This speeds things up enormously. Panasonic was a little coy on matter, but I wrested a figure of about 20ms from them. I shall try to test one if I get a chance. But if true, that’s impressive. Games modes on consumer TVs tend to exhibit a latency closer to 40ms.

There was a reason there were two side-by-side TVs at the Panasonic 2019 AV launch. Both were showing the same game play via a HDMI splitter. After a while they switched off “Game” picture mode on one of the TVs. Bang, it was clearly visible how hugely it lagged the gaming-ready TV.

Panasonic also showed off three soundbars – all three come with subwoofers – and a new entry-level UltraHD Blu-ray player, the $279 DP-UB150. That brings the Panasonic UHD BD player line up to four models, including the magnificent $1,649 DP-UB9000. That one has now had Control 4 functionality added. That won’t matter to most consumers, but those who have automated systems could well benefit.

The soundbars certainly lifted the quality of the sound from the TVs and have the added benefit of supporting Chromecast. That makes using them with things like Spotify easy.

Some of them also support Dolby Atmos. But that means they support the Atmos signals and can decode it. It doesn’t mean they can produce a truly impressive surround field. For the most part, the sound was full, clear and well balanced, but it all sounded like it was coming from the direction of the TV, not from all around the room.

Read more about these various products at Panasonic’s website here.