Panasonic focuses on stills with the Lumix DC-G9 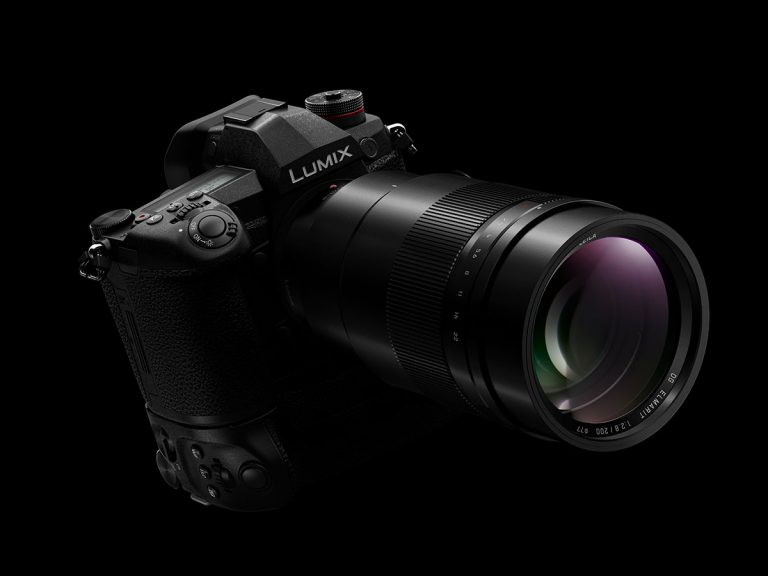 Bondi, Wednesday 8 November 2017 – after the launch earlier this year of the Panasonic Lumix DC-GH5 camera, you might reckon that Panasonic was finished with the high end stuff for the year. Well, it kind of has because today’s camera, the Panasonic Lumix DC-G9, won’t be available until January 2018. For still photographers, though, it might well be worth waiting.

Why? Two things I’d say. First, enhanced optical image stabilisation. Second, a new 80 megapixel high resolution mode. I shall return to both of those, but first some basics.

Whereas the GH5 launch was at least as much about that camera’s advanced video capabilities, this one refocuses (sorry) on still photography. Scattered around the launch were some stunning wildlife shots printed on A1 stock, all taken by photographers with early access to the G9.

The camera is of course part of Panasonic’s (and Olympus’) Micro Four Thirds mirrorless system. Panasonic has tweaked the 20.3 megapixel sensor from the GH5 to improve still performance. It’s coupled with the Venus Engine 10 which processes the raw data from the sensor into actual digital images – both JPEG and uncompressed, relatively unprocessed RAW formats are available.

Getting the light onto the sensor accurately is, as always, all important. Much of that is done by the use of good glass. We’re told that Panasonic alone has released thirty lenses for the Micro Four Thirds system which, it says, “is still the largest mirrorless system”. We’ll return to that shortly, because it has also released a very special new lens.

The other thing needed for accuracy is to ensure nothing’s moving while the shutter is open. That’s where optical image stabilisation is vital. You don’t need it if you have a tripod, but for hand held, especially with longer focal lengths, OIS can make the difference in a big way. The G9 incorporates Dual I. S. 2. Originally in the Panasonic system, all OIS was performed by the lens. With the GH5 Panasonic added it to the camera body and set up the system so that the two separate systems worked together to smooth out even more movement.

Hands on the camera with a very long lens – a 400mm telephoto zoom, 800mm in 35mm equivalent terms – the first thing I noticed was how as I settled my point of aim on a scene, the image through the viewfinder would snap into place, becoming dead still.

Panasonic says that it can provide 6.5 stops of compensation. To let the likes of me check that out, they had screwed a 10 stop neutral density filter onto a 60mm lens (120mm equivalent) to blow out the shutter speed to a full second, despite the bright Bondi sunlight. The lens looked like it had a sheet of black glass over its end.

My first shot was so so, but by the third shot, with controlled breathing, I was able to get perfectly presentable shots, despite the ridiculously slow exposure speed. Here’s a sense of the full picture:

Here’s the detail, cropped down to 1:1 resolution on many monitors. Hand held, remember, for a full one second exposure. Those buildings were about 850 metres from where I was, at the other end of Bondi Beach.

Now some may say that 20.3 megapixels aren’t enough. The Panasonic Lumix DC-G9 gives you options. Specifically the 80 megapixel high resolution mode. This is very much for tripod only, and for still scenes only, because it involves taking four pictures in rapid succession, moving the sensor a microscopic distance between each shot. So where there is one pixel in the regular mode, there are four in this mode. The camera then merges them all into a quadruple resolution shot.

The camera and scene must be stable because the four shots are in sequence. Any tiny movement between one shot and the next will spoil things.

Is the glass good enough to resolve a significant difference between the two? I used a similar scene to the one with the 1 second exposure and again a 60mm lens (120mm equivalent) at the buildings 850 metres away. Ideally you’d use a remote shutter release. We used a few seconds delay so that there’d be no camera shake from a hand on the camera. The four shots were taken in very rapid succession. The camera also kept a standard 20 megapixel version of the picture.

Here’s the full frame scaled down for context (I’m using the JPEG versions for all these because Photoshop doesn’t yet support Panasonic’s latest version of RAW format):

Now here’s the 20 megapixel version, cropped down to some of those roofs (and doubled in size in Photoshop so that it matches the other version):

And here’s the 80 megapixel version. If you have any doubts about whether the camera and lens can usefully employ the additional pixels, just check out the roof tiles.

Again, this mode is not for moving stuff. Here are those foreground waves. You can see how the four images from different instants have been overlaid.

But if you’re doing still lifes, portraits and many other types of photography where both the camera and scene are stable, this camera gives you an astonishingly high resolution.

Focus, incidentally, is now rated at 0.04 seconds, and is recalculated 480 times per second.

All this only touches on the camera’s capabilities. One new feature, for example, allows the display to zoom in during autofocus to ensure that the point of focus is where you want it to be. There’s Panasonic’s 6K mode which takes 18 megapixel shots at 30 frames per second – you can set it to record before you release the shutter – so that you have a sequence of frames from which to choose. There’s a new “Pre-burst” mode for full resolution shooting which grabs 0.4 seconds worth of shots before you release the shutter.

While aimed more at still photographers, the camera will nevertheless take UltraHD video at up to 50 or 60 frames per second and with up to 150Mbps of data, and full HD at up to 180fps for high resolution slow motion. There are headphone and microphone jacks and a full size HDMI output.

The first thing I checked was the “Display” key. Unlike the GH4 and GH5, it no longer falls under the heel of the hand. I constantly have to cycle through display modes on my GH4, having accidentally pressed it.

The mode dial has been moved to the left side, stacked atop the drive dial. It remains lockable. You can program two different burst modes into the latter for ready access. On the right hand top there’s an LCD display showing useful information of the kind that photographers like without having to make resort to the rear display. That in turn will fold out and is bendable to just about any angle that suits the photographer. The Live View Finder uses OLED technology and you can set it to one of three magnifications so you can have it as subjectively large as it can be while still fitting within your field of view within the viewfinder. (There’s also an optional eyecup available for $29.95.)

There are plenty of convenient dials and programmable buttons. The camera supports Bluetooth and WiFi – 5GHz for fast transfer and control. It can pair with your phone for geotagging photos. It has USB and you can tether the unit to your PC or Mac for viewing, transferring photos or control. It uses SD cards for media with the UHS-II bus supported for both card slots. You can use two cards to relay record and backup in camera.

The camera is weather sealed to make it splash, dust and freeze proof and it has a magnesium alloy chassis. Also available as an optional extra ($399) is a battery grip which doubles your battery life and replicates a number of the camera’s control for easy access.

Also launched was the new LEICA DG ELMARIT 200mm f/2.8 prime lens. Prime as in non-zoom. So it has a fixed 400mm equivalent focal length. The fast speed and the Dual I.S 2 support allow considerable flexibility in hand held shooting. It comes with a 1.4x converter to boost it to an equivalent 560mm. It supports Panasonic’s DFD – Depth From Defocus – fast auto focus system.

That kind of glass doesn’t come cheap. When it appears in January it’ll set you back $4299.